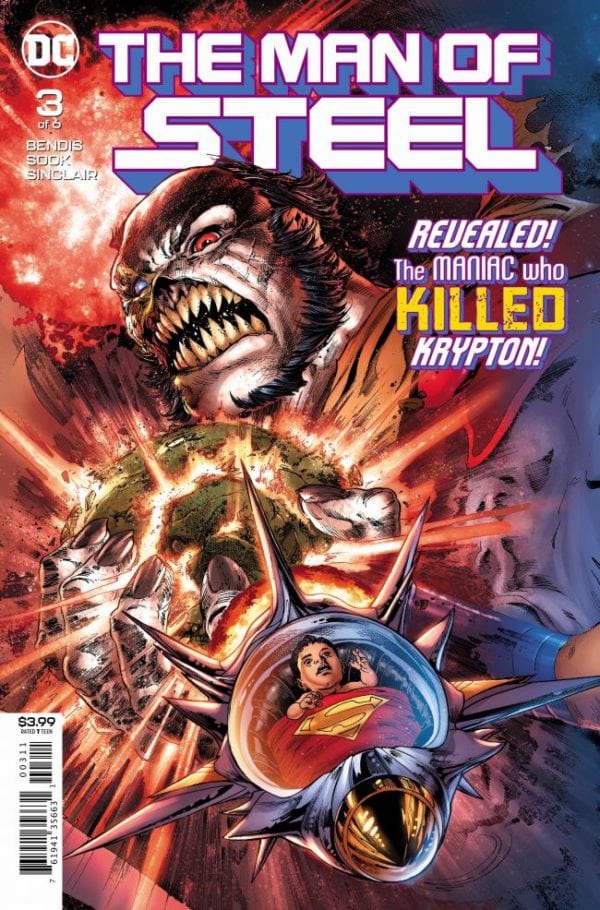 Brian Michael Bendis does a nice bounce back from the previous issue of The Man of Steel with the third chapter of the miniseries as Rogol Zaar makes his presence on Earth known in a big way. Bendis does a good job here of focusing on Superman’s emotional state and understanding his thought process as he grips with this mysterious and powerful threat.

The story gets a good kick into overdrive as Superman discovers a horrific attack on his Fortress of Solitude, including the complete destruction of the bottled city of Kandor, leaving him and Supergirl the true remaining survivors of Krypton. Bendis captures both Superman and Supergirl’s emotions as they deal with this loss, focusing more on their anger and grief than anything else. It’s still nice, however, to see Superman still using a rational head as he contemplates what their enemy is after and next move will be. Bendis definitely has a solid voice for the Man of Steel.

The issue also moves along at a fairly quick pace. That’s partly down to the art with Ryan Sook using several full page spreads or splash pages, but Bendis’ writing is still concise. There is still a lot of wordiness here with Superman’s thought process shown throughout most of the issue, but Bendis is able to make them go by quick and also knows when to dial back the thought boxes, such as when he overlooks the devastation to the Fortress. It doesn’t distract too much from the art either, though panels still feel a bit jammed with everything going on plus all the dialogue.

The only other criticism is the slow reveal about what happened to Lois and Jon and their mysterious visitor. It’s plodding along one bit at a time with Jason Fabok doing just one or two pages an issue. Were this a monthly series instead of weekly it would be a bit more frustrating getting such small bits of information, especially when it rehashes so much of what we’ve already seen. Whatever Bendis is playing here with Lois and Jon is taking its time, but we’re still no closer to knowing what’s happened to them.

Sook’s art is good throughout the issue and he’s able to capture the emotion in Superman’s anguish. His silent arrival at the Fortress is one of the standout images of the issue, as is Superman and Supergirl’s reaction to Kandor’s destruction. The facial features on the characters work well as does the body language. Sook also shows some nice movement of the characters, particularly in a scene where Superman employs Batman’s help to investigate another fire and the placement of each character in the room.

The Man of Steel #3 is an improvement over the last issue and Bendis displays a good level of characterization with Superman and his supporting characters. Ryan Sook’s art hits the emotional notes and the story moves along at a good pace. However, since we’re now at the halfway mark of the miniseries, we should have a bit more of a grasp on where it’s heading or what has happened to Superman’s family than the little bits we’ve been getting.