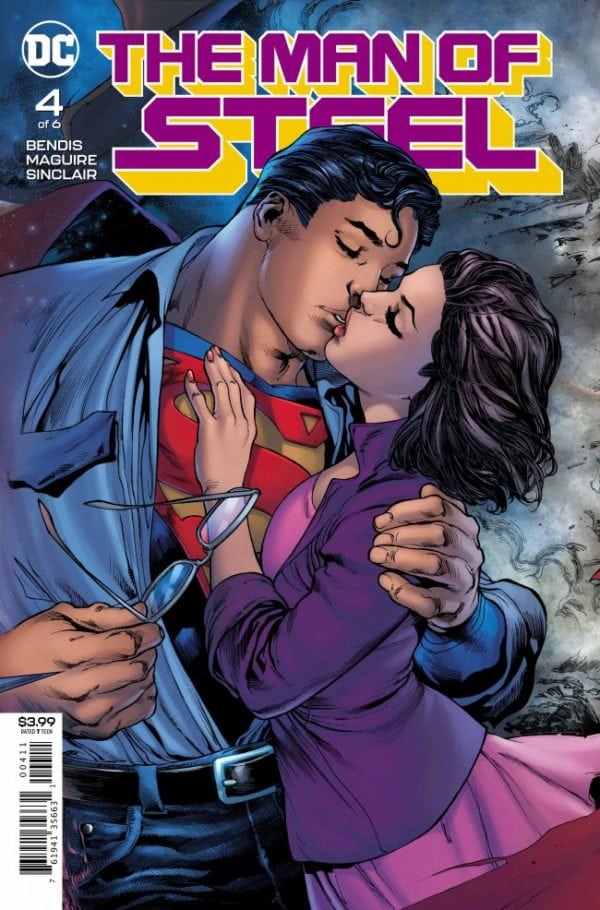 Brian Michael Bendis really gets to stretch his Superman muscles with The Man of Steel #4 as Superman faces off in a battle with Rogal Zaar across Metropolis. The issue is exciting, but Bendis uses the opportunity to really dive into how Superman uses his powers during such an intense and high stakes situation. It’s a nice improvement on the last couple issues, returning it to the feel of the first chapter to this miniseries and Bendis’ focus on Superman’s character.

This was a pretty action-packed issue as the story depicting the fight between Superman, Supergirl and Rogol Zaar. Bendis showed a good understanding of Superman’s powers throughout the fight, showcasing just the amount of strength he’d need against his enemy, but just enough to cause the least amount of damage or try to avoid any losses as much as possible. It also synced up fairly well with the little preview of the fight that was shown back in Action Comics #1000 and played up just show dangerous Zaar is. He isn’t just powerful, but cunning as well, using Superman’s powers against him while trying to throw him off his game emotionally.

There was a bit more story in the latter half of the issue as they contemplated what Zaar was really after and whether his claim that he destroyed Krypton could have any validity. It’s not much advancement to the story, though, as we didn’t learn anything new and didn’t even get more depth into Zaar’s actions.We finally did learn, however, who exactly is in the strange ship that came to Clark, Lois and Jon and Jor-El re-appeared. At this point though the quick two page flashes to whatever happened to Lois and Jon with the repeating dialogue is getting a bit tiresome. Because it’s such a brief look back, there also isn’t an explanation for how Jor-El could be back after the events of The Oz Effect, but hopefully Bendis will be more forthcoming with answers that span more than a couple brief pages before the series concludes.

The art this time is illustrated by Kevin Maguire. His depiction of the action is well done, showing a good sense for choreography as the trio battle around Metropolis. Maguire also shows off Superman’s powers well, whether its his speed, x-ray vision or heat vision which also helps the detail . There is a lot of movement in his panels, particularly in the background as Zaar either spends time charging at Superman or you see Supergirl travelling further in the distance after being thrown. It’s fairly dynamic, but when the action pauses in the latter half of the issue the characters look somewhat stagnant as they stand around and talk, though there is still a good amount of detail in the background to look at and Superman’s face as he returns to the Fortress has some good hefty emotion behind it.

The action is the selling point of Man of Steel #4, but while that is entertaining and the visuals are engrossing, Bendis is dragging out the story with no further depth into Rogol Zaar’s character and the mystery surrounding Lois and Jon’s absence. Those aspects are getting a little tiresome now that we’re past the halfway mark, but Bendis’ characterization of Superman still works. Hopefully the final two issues will be a little more interesting and revealing.