And going off of that, I have to ask what’s it like writing music for Animal? Cause he’s not exactly a conventional singer [laughs]

Andy – [Laughs] That’s true! Regarding Animal, his feature moments on the show are big drum solos, but he does contribute a lot to the background vocals. And when he does, he definitely sounds like Animal. So yeah. But I’m going to start pitching that actually, if we get another season, to try to get Animal to sing a ballad or something [laughs]

[Laughs] And I assume, Mr. Horn, that Animal’s reliance on instruments must be very fun for you to play with?

Keith – I try to play Animal with percussion. If he’s not playing a drum solo on screen, sometimes he’s just running around making a mess, especially in the early episodes, in which case I just pull up a drum set and go nuts and throw a bunch of different percussion layers on top of it, and basically just play Animal like Carl Stalling would play a classic Bugs Bunny character. It turns into a Road Runner cartoon for a minute when he’s just running around.

[Laughs] Well, if I may follow that up Mr. Horn, I remember watching a documentary on Pixar, and it was really cool to see one way they recreated sounds was they would basically create a real-life version of the scene that would play out in the animation. Like, if the characters were moving around kitchen utensils, they would do the same and record it. When you’re doing the music for the show, have you ever employed similar methods where you sort of recreate what the characters are doing in your studio?

Keith – Not really, because we have a great sound effects team and sound editor that do a very good job at the sound editing. I try to stay out of the way of their effects. But there are some things. Like, there was an episode where Animal hadn’t showered in days and days, and he smells bad but his friends don’t want to tell him. So I had to figure out a way to instrumentally make somebody smell him. Now, how do you make the audience smell something?

Keith – And I couldn’t think of any traditional instrument. There’s no chord that quite pulls it off. So I ended up creating a library with a trombone player. I said “just play the grossest, non-idiomatic trombone sound you can make.” So he had this plunger and was making these flutter- tongues and glissandos and all these really strange sounds. And I used those sounds that are very non-musical to sort of play the odor of Animal. And it was the closest thing where I had to cross from music over into sound effects, because music just wasn’t cutting it and sound effects wouldn’t have covered it well enough.

That’s very interesting to hear. In a way, it reminds me a bit of this condition some people suffer from where their senses get mixed up-

I mean, there’s a first time for everything right? 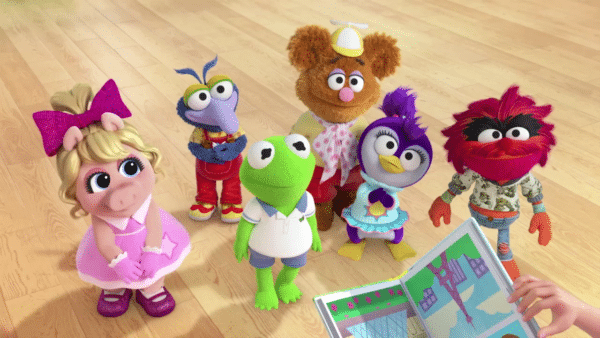 On that note, how much freedom do you gentlemen have when writing the music? I’ve noticed that all of the songs are under 1.5 minutes. Was that restriction put on you beforehand so that things wouldn’t drag out?

Andy – That’s really dependent on the episode. The basic outline is to be a minute to a minute and a half just because the episode is only 11 minutes, and they still need to tell a full story. There’s only that much time.

As far as the rest of the songwriting process goes, I’m given a ton of freedom, which is great for me. I just get a little blurb in the script that says “write a song about this for this scene,” and go from there. Sometimes the writers will have a specific genre in mind, or some very specific storyboards they want me to hit, but they usually just turn me loose with that blurb, and I write the lyrics and the music and send it back and then we figure it out from there. And you know, occasionally stuff needs to get tweaked or redone, because of notes from the network or the director, but for the most part we’re pretty smooth.

Keith – For the score, I feel I have a ton of freedom musically. I get fairly detailed notes from our showrunner, Tom Warburton, like “hey, don’t miss that Animal is sad here,” and certain obvious things that I have to hit with action. But for the most part, I have a lot of freedom with how I can execute the story musically.

It’s nice to hear that you have this much freedom, because usually on children’s shows they tend to be a little more restrictive. I have one last question for you two, if you wouldn’t mind answering. It’s something I like to ask all composers I speak to, and it is what are three albums or compositions that have had the greatest influence on you as a musician? They can be film scores or music albums.

Andy – Three artists is easier for me. Let’s see, Randy Newman is my favorite songwriter, and also Raymond Scott who did a lot with his Quintette that was then re-purposed for the Bugs Bunny cartoons. And Hoagie Carmichael, he did Stardust and a lot of other famous tunes that have really stuck with me.

Keith – I kind of have two answers to that because, for this show, I have three main composers that I listen to and try to get inspiration from. They’re John Williams, Bruce Broughton, and Joel McNeely. Those are the film composers who, for me, inform the score of the show. But then the compositions and pieces that have been the most influential on me just as a musician and as a composer, I would say are Stravinsky’s The Rite of Spring, it blew my mind when I first heard it; Frank Zappa’s One Size Fits All, that album is my desert island album [laughs], and then, again, anything by John Williams is always great.

You both have listed a lot of icons, and I just have to say that you two more than hold your own against them. It really is mind-blowing how, even though you’re working with a reboot of a beloved children’s show famous for its tunes, you’re still able to create all this original music and implement past and present genres. So thank you so much gentlemen for taking the time out of your day to speak with me and have a great future career.

Andy – Thank you so much for listening and having insightful, thoughtful questions. That was really appreciative!

Keith – It was great, thank you!

Flickering Myth would like to thank Andy Bean and Keith Horn for taking the time out of their day to speak with us. Viewers can catch Muppet Babies on Disney Channel and Disney Junior.