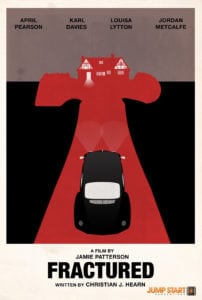 A couple seemingly suffering relationship issues escapes to a secluded country house for a romantic getaway, but they soon become convinced that they are not alone. 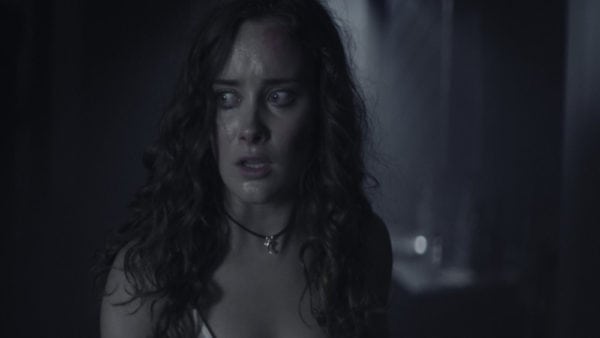 The first half of low-budget British horror movie Fractured plays as a very conventional haunted house story. Rebecca (April Pearson) and Michael (Karl Davies) are fixing a blowout at the roadside while en route to a getaway in a country house miles away from anywhere. They have a bizarre encounter with a creepy dude at a petrol station and, once they arrive, it becomes clear that some sort of force is stalking them. So far, so generic.

However, it’s as this story is winding up for its descent into third act insanity that director Jamie Patterson pulls the rug out from under the audience. A second couple, played by former Eastenders actress Louisa Lytton and a mostly silent Jordan Metcalfe, is introduced and it’s clear that their story intersects with the duo we have already met. To say more would be to venture into unforgivable spoiler territory, but it’s safe to say that the movie is never quite the same after these characters arrive.

Patterson showcases a clear affection for haunted house films and home invasion stories, with much of the movie playing with the idea that the threat stalking his protagonists may be either human or supernatural. The dark house is lit very strangely, but in such a way that there’s a seemingly infinite number of shady corners for terrifying things to hide. It’s an evocative location that proves to be the perfect backdrop for scares, though Patterson largely avoids generic jumps and jolts. 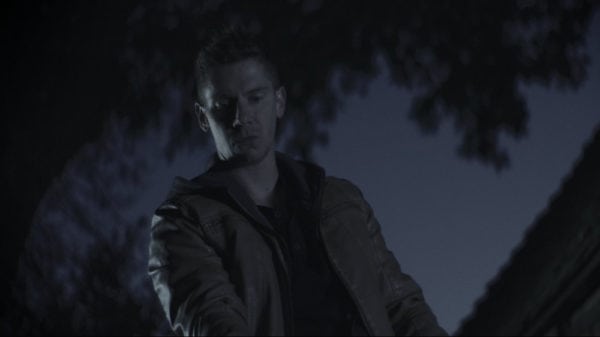 Being a British movie, Fractured delivers a healthy side order of humour with its horror. Karl Davies has a solid run of sardonic one-liners and his relationship with Pearson is sparky enough to create plenty of comedy moments. There’s also an incredibly dark strand to some of the comedy, whether it’s a brief nod to the horrific premise of Stephen King tale Gerald’s Game or the bleakest gag about a Nando’s loyalty card ever committed to cinema.

On the more serious side of things, it’s Lytton – a future Scream Queen if she’s willing to embrace genre work – who yields the most surprises with a fiercely emotional turn that provides the movie with an anchor point as it moves into its conclusion, which is equal parts adrenaline-fuelled chaos and wearisome repetition of scenes that the audience has already seen. It’s all well and good to want to reward audience members who followed the breadcrumb trail, but this trick does minimise the momentum of the finale.

Fractured deserves credit for its commitment to surprising the audience. It eschews the standard storytelling structure of a horror movie to wrong foot even the most genre-savvy of viewers, while delivering a sackful of scares and its fair share of laughs as well. As far as doing horror on a low-budget goes, this is a sophisticated, shining example.