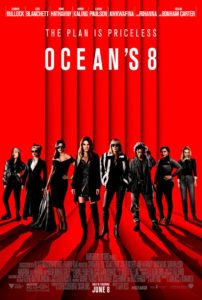 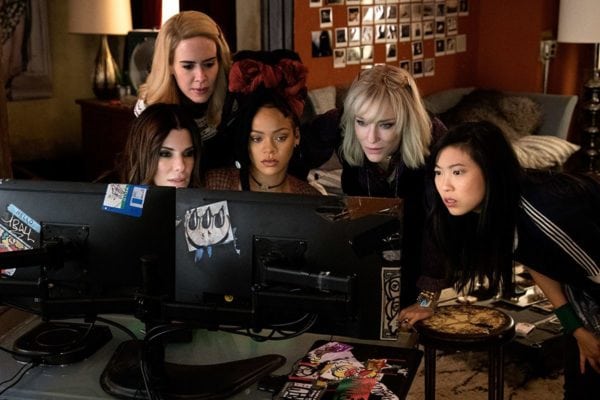 With the announcement of an all female film set in the Ocean’s universe, many of us were excited and hoping for a new take on a heist film. This time around the action follows Debbie Ocean (Bullock) sister of Danny Ocean putting a team together to steal a $150 million necklace from the neck of celebrity Daphne Kluger (Hathaway) at the Met Gala. Whilst there was some hope that Ocean’s 8 would reinvent the heist movie, it is just more of the same. That’s not to say it isn’t an enjoyable way to spend a couple of hours in the cinema, it’s just slightly bland.

The acting talent on display is impressive to say the least. Sandra Bullock as the lead is fantastic but doesn’t get to use her comedic chops that much. Cate Blanchett as second in command Lou is the coolest woman who’s ever lived and has an impressive jacket collection. The rest of the team is filled out by fence Tammy (Paulson), hacker Nine Ball (Rihanna), pick pocket Constance (Awkwafina), struggling designed Rose (Bonham Carter) and jeweller Amita (Kaling). However, with all this incredible talent, they are let down by a script that just doesn’t feel sharp enough and is definitely not funny enough. There are a few good one liners and in certain scenes there is chemistry between the crew, but it mostly feels like a box ticking exercise.  The exception to this is Anne Hathaway as glitzy starlet Daphne Kluger. She’s hilarious throughout and seems to be the only cast member having fun and going for it 100%. 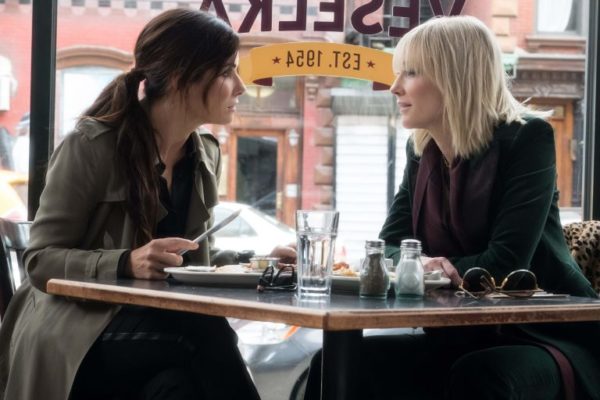 The failings of Ocean’s 8 don’t make it a bad film, instead it feels frustrating that it could have been so much better. This is due to the script and the direction from Gary Ross seems desperately to be trying to imitate Soderbergh’s original trilogy instead of carving out its own identity. Whilst the nods to the original franchise come throughout, it would have been nice for the director to branch out and use some original style. There’s also a lack of peril to get invested in. Whilst you know going into a film like this that they’re going to pull the heist off, there’s usually a bit of danger or a few bumps in the road to get you invested. Other than a few minor hitches that are solved as soon as they’re created, there’s no doubt that the team will succeed.

If you were defining Ocean’s 8 in one word it would be “fine”. There’s nothing wrong with it and seeing the team pull off a heist and having fun is a blast. Hopefully there will be a sequel that can correct the wrongs of this first outing and shake things up a bit. As it stands Ocean’s 8 is a by the numbers popcorn movie.