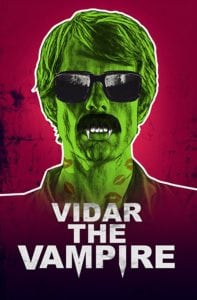 A Christian farmer searching for a higher purpose to life, falls into sin and wakes up as the Prince of Darkness in the city of Stavanger, Norway. 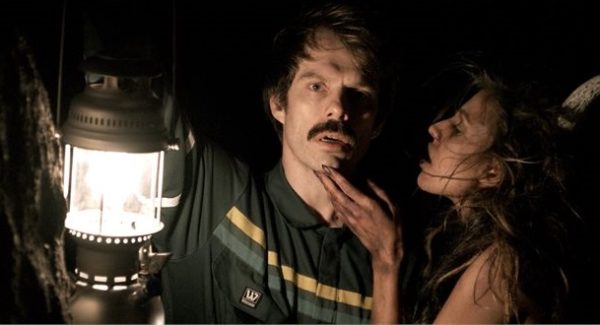 Dread Central Presents’ Vidar The Vampire is a bloodsucking Norwegian tale of “be careful what you pray for.” Co-director and star Thomas Aske Berg lands halfway between What We Do In The Shadows (self-referential vampire comedy) and Interview With A Vampire (sexy genre seduction) – never full-blown, mind you. It’s the kind of movie where someone gets skullfucked by Jesus as a means of transformation into sinful blasphemy, so interested in blurring the lines between heaven and hell. While I can admit a lot is done with little means at times, the bigger questions being asked by this Catholic’s nightmare don’t quite mesh with a man’s whorish quest. Playful, if distractingly so out of moderation.

We first meet Vidar (Berg) as a child farmhand who must tend daily chores while his mother lays in bed unable to help. Speed forward to 33-years-old and Vidar is still living at home, same claustrophobic situation. One night, in a moment of weakness, he throws a Hail Mary asking Jesus for an escape from the existence he never asked for and to “experience loose women 20 and up.” Vidar then dreams he meets Jesus (Brigt Skrettingland), accepts the “body of Christ” and awakens changed. Thirsty for the inexplicable, able to be resurrected. With Jesus by his side, the two explore feminine wilds along with pains of being undead – all this playing out while Vidar narratively details recent events to his therapist (Kim Sønderholm).

So, yeah. Jesus is a centuries-old vampire, he loves turning women into demon strippers and granting wishes like a Eurotrash genie. Must have missed that afterschool Catholicism class? Imagery is quick to recreate crucifixion poses in satirical manners – Vidar floats out of his coffin, stretching a bedhead yawn in front of a church cross – and implications are not subtle. Jesus grants Vidar his wish just as prophecies hath foretold, but not with kindness and mercy. As Lucifer might do – and this is intended – Jesus dooms his mentee to a demonic life with no escape. Villagers raise their shotguns in God’s name when Vidar’s mummified corpse arises, denouncing Satan – but how can we know who is truly at fault? Or is a deranged vampire cloaked in religion as a distraction?

There’s plenty worth reading into with Vidar The Vampire. 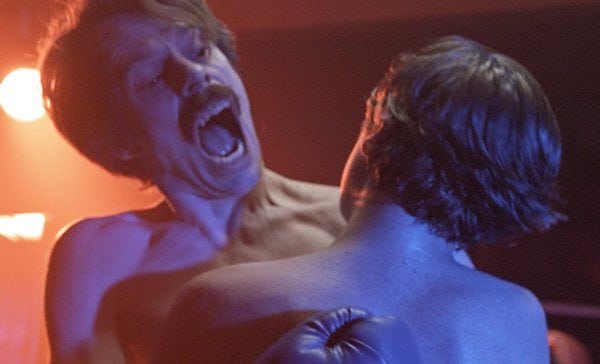 The path Jesus leads Vidar down is that and only ever of male debauchery. Nubile women are pursued for their freshness, which may alienate viewers of the opposite sex. Girls are either 21-year-old pleasures of flesh or leered targets. There’s a fair compromise between male and female nudity – Berg flees from a tattooed musclehead, dong swaying back-and-forth – but only after uncomfortably draining blood from a passed-out victim’s ladyregion. Women are pawns, sacrifices, and implements of gratification, all because this is the fantasy Vidar initially asks for. That doesn’t make it any less burdensome at times, as Vidar and Jesus do all the philandering while women represent the childhood memories of a farmer’s lonely young son.

Thomas Aske Berg “the director” (along with co-director Fredrik Waldeland) makes some interesting marks on the vampire subgenre. Particularly more existential or dream-blurred sequences. When Vidar is “turned,” his sprinting escape through underground cavern systems stinks of urgency and locational darkness. Nightlife scenes are subsequently sultry, Vidar wears a shimmery silver Moonman suit in the daytime to avoid sunlight, and there’s a particularly intriguing fight-night ringside metaphor that jumps away from usual bite-the-neck life draining. These out-of-the-box designs make for an abstract – and sometimes offensive – swerve away from vampiric lore, which if anything spikes bursts of interest. This isn’t just *another* Dracula redux.

Conversely, Vidar’s promiscuous panty raid is a bit lopsided. It’s one constant bumble through the mechanics of working into a vampire’s body without ever admitting so. Is the concept of a “vampire” even stated out loud either by Vidar’s therapist or any other character? Jesus is this EDM-loving magician who turns water into wine to impress women, but the act gets old. Vidar’s obsession with a room of rotating prostitutes (wearing devil horns) takes expected sentimental routes, only after running the party vamp angle a bit thin. It reminds me of a yet-to-be-US-released festival flick I once caught called Norway, a similar story about raving undead dance maniacs with an upgrade in style – Berg’s bumpkin-turned-vampire-bumpkin not quite on par.

What Vidar The Vampire accomplishes in phallic charms dances a fine line that’ll divide audiences. Some will love Vidar, and they should. He’s a small-town-boy dealing with biblical uncertainty while also adapting to his new ghoulish form. Others will find themselves turned off by the film’s singular focus and treatment of female characters as nothing but blood sacks. It’s a tonal choice and one that comes with a price – but if you’re tuning in for a folksy supernatural ballad about fangs, fornication and wild-at-heart bromanship, then you might just find a new addition to your anti-Twilight playlist.