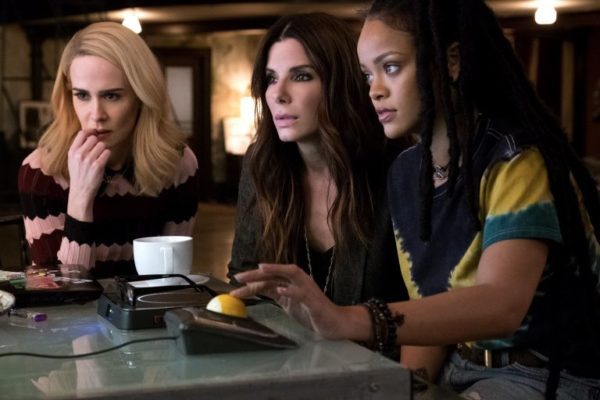 As George Clooney’s Danny Ocean passes the franchise torch to his estranged sister, Gary Ross’ Ocean’s 8 aims to prove million-dollar heists aren’t just a man’s game. Ladies can be Ghostbusters now, after all. Why not notorious thieves? Ross and co-writer Olivia Milch downsize from luxurious Las Vegas casinos to New York City’s historical museums, which also reduces “wow” factors a dabble. Danny’s plans were always extravagant, intricate and recklessly showy, and that’s not to say Debbie is any less talented – but it’s a different snatch game this time around. Ross doesn’t showcase the same grandiose wherewithal Steven Soderbergh brought to his boisterous “crooks night out” epics, nor the pristine gratification of a plan coming together.

Sandra Bullock stars as schemester Debbie Ocean, just released after spending five years in prison for fraud related reasons. The first thing she does is connect with loyal companion Lou (Cate Blanchett), exchange pleasantries and reveal a new sting that she concocted behind bars. Debbie can’t even last a day without jumping back into her buglaring ways, but Lou can’t deny such ambition. No banks, no stores. In true Ocean fashion, Debbie sets her sights on the upcoming Met Gala where priceless European jewelry will be on display (specifically a “Toussaint Necklace”). How does $16 million per cut sound? Good enough to convince seven accomplices to join her merry band of event crashers.

On paper – and in practice – Debbie’s collection of part-time criminals packs oodles of poised spunk and impossible ease. Blanchett the vodka-watering club owner with a glimmer-punk vibe. Rihanna the dreadlocked, pot-toking hacker Nine Ball. Sarah Paulson as “bored” housewife Tammy who still moonlights in consumer product theft. Helena Bonham Carter the flighty garbled designer with a tax debt Rose Weil (my standout if you’re demanding a top-to-bottom rank). Awkwafina as street grifter and millennial comedic relief Constance. Mindy Kaling the unmarried diamond appraiser who’s sick of living with her mother. They all pronounce their moments and come together with the same star-striking might as Clooney’s boys club – but not equal mission excitement. Even Awkwafina’s definitely-here-for-laughs pickpocketing. Ross’ direction emphasizes the mundane, not the magnificent. Bullock’s performance as Debbie Ocean redefines sophistication, control and composure from the very first scene where she shoplifts her way throughout New York City (unchallenged). Bless a character who champions confidence equal to execution, and how infectious such pride can be when bonded to acquaintances new and old – but that’s not all. Her unspoken(ish) sexual fluidity adds to Debbie’s trademark mystique – relationships with Lou and Tammy insinuated – which dredges further depths into 2018’s gender-swap intrigue. Same-sex lifestyles and bisexuality are offhandedly mentioned in dialogue, furthering the conversation around “generic” inclusion in movies as big as Ocean’s 8. Plus who wouldn’t ship the union of Sandra Bullock and Cate Blanchett OR Sarah Paulson as a fabulous, spellbinding romantic example? Swoon x2. Cooler-than-you sparks spitting as their eyes lock like AC/DC pyrotechnics.

This brings us to Richard Armitage’s Claude Becker, Anne Hathaway’s Daphne Kluger, and a few choice story elements that service neither genre nor tone.

Here’s a slight, possibly inconsequential but personally distracting note – do we need the jilted ex-lover arc? Armitage’s role isn’t just as a mark, but also Bullock’s former boyfriend. He once gave Debbie up in order to save himself, and she stews incarcerated for five years over the fact. This turns the film’s Met Gala heist not only into a monumental payday, but a bid for revenge. Ross’ all-female remake hellbent on empowerment *still* unable to plot a dip-and-juke scheme without romantic drama. Is it reductive? No. A bit unnecessary? To me. Your take-my-money pitch of “Sandra Bullock steals irreplaceable jewelry” works without touchups. Personally, adding Becker into the main heist as a means of “closure” still tells me we can’t make a “girl’s night” equivalent without heartbreak. And that’s a bummer.

Now to Hathaway’s overdramatic TMZ-ready actress Daphne Kluger who pines over anecdotes about staring down “The Queen” and living popularly. She is, pound for pound, a bubbly delight of regality and fragile egotism. She’s also a strange pivot point for the film who highlights bigger tonal problems about everything going pitch-perfect for Debbie. No spoilers, but Ross’ Ocean’s 8 is a daredevil stunt without the impending doom. A stack of cards held together with glue as displayed by Kluger’s Act III repositioning no matter how much you might enjoy the lonely performer’s motivation. This is the biggest problem I had with Ocean’s 8. The plan, from start to finish, goes on without a consequential hitch to point towards. Simplicity does help breeze through conversational dialogue that benefits these A+ womanly talents, but not when Debbie tips the first domino for the billionth time in Ocean family history. Scenes become too encumbered by attitudes proving just how easy it is for Debbie’s crew to rip a magnetized necklace off a poisoned woman’s neck – but is that what you want in a heist film? Twists and turns exist, only to be erased by Debbie’s steadfast assurance that twelve different safety nets have already been thrown to catch the crew. Diamonds sparkle, magic machines solve hiccup issues and everyone walks way with fatter pockets. No shocks, no delightful bamboozling.

Also, why are we so indebted to Clooney’s Danny? This is Debbie’s story, yet Danny finds himself prominently mentioned or *in some way* shown over and over. Not even in nostalgic passing. Bullock is tethered to selling points of the past and generics that do her icy-veined mastermind zero favors. Ross just marches along towards inevitable glasses of champagne being clinked in flat and droll presentations unsuitable of the Ocean name. It’s not to say James Corden’s insurance investigator doesn’t entertain given his general exhaustion, but once again Debbie’s puppeteering of even this aspect sucks the fun out of sleuthing. That’s not the Ocean’s 8 I expected (despite Ross’ last film being the dead-on-arrival Free State Of Jones). Nor the Ocean’s 8 this case deserves.

My experience with Ocean’s 8 wasn’t that of a red carpet affair. Designer dresses do flaunt high-class couture with a fashion lover’s blushing accent, but the entire draw of such films – the all-important heist – ends up leaving no impression. Plot devices take the most contrived liberties to ignore red flags of a less complicated shuffle that can’t get by on showbiz extravagance as Steven Soderbergh’s calamities once accomplished. At one point a background patron even calls out Constance’s conspicuous appearance as to suggest “WTF?!” in the most distracting way, but again, this isn’t about Debbie Ocean’s gals teetering on capture. The gesture, like so many, goes unquestioned. Blueprints are followed, stances powerful, but even name recognition can’t lift the tonal ambiguity of this crime caper without zest or soulless flamboyance (minus Daniel Pemberton’s hop, skip and bass jumpin’ score). Not something I thought possible, but here we are.