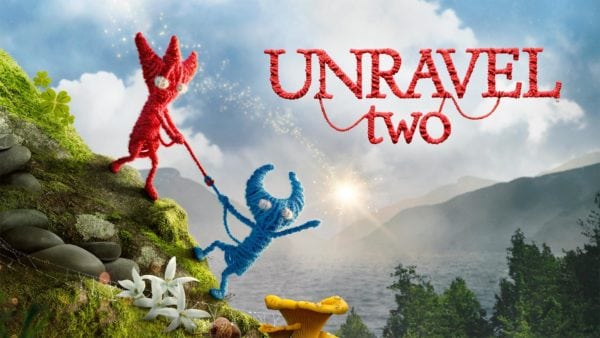 Less than 24 hours before I put fingers to keyboard to write this review, the world had no idea that Unravel Two even existed, let alone that it was finished and would be instantly released during EA’s 2018 E3 conference. Don’t let the lack of hype fool you, though; this sequel to 2016’s cult favourite puzzle platformer is a remarkable surprise indeed, delivering a terrifically enjoyable co-op experience that rectifies many of the original game’s minor quibbles (though some might argue to a fault).

The red anthropomorphic yarn-creature from the previous game – imaginatively named Yarny – is joined by another piece of brightly-coloured living fabric this time around, allowing a second player to join the, ahem, fray. Though Unravel Two can be played entirely solo – by combining the two Yarny characters into one entity and only unspooling them when a puzzle requires two pairs of hands – it’s wholeheartedly recommended that you grab a pal, because the experience is so much more fun that way.

While it is a tad disappointing that the game only supports local co-op – possibly a trend with EA Originals after A Way Out also didn’t allow online multiplayer – the joy of soaking in this lushly-wrought world with another person in the same room quickly speaks for itself. There’s also the distinct feeling this time around that developers Coldwood Interactive wanted to make the game more appealing to younger players, especially after Unravel received push-back for some of its tougher and more obscure puzzles.

And fit for all ages Unravel Two certainly is. From the ability to customise your Yarny at the start of the game to the generally scaled-back level of difficulty, breezier pace and greater focus on more traditionally “gamey” platforming elements, it is a game that both adults and kids alike should find plenty accessible and charming.

There will certainly be those who will be disappointed by the sequel’s simpler through-line, though given the occasional tedium that ensued with the original’s puzzles, training the focus more towards platform-hopping and primarily physics-based tasks was certainly a smart idea. 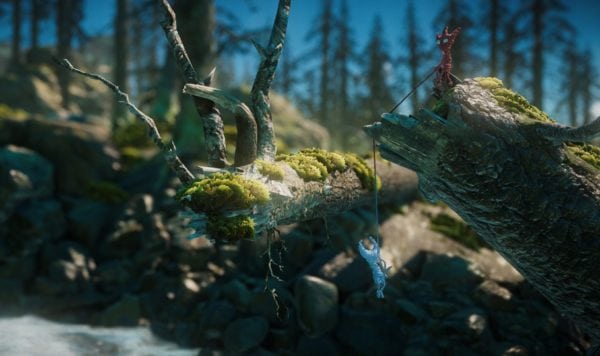 The game also generally feels a little more polished and assured than its predecessor; while some of the first game’s more oblique sequences invited frustration, there was nary a moment where I felt at the mercy of janky or awkward mechanics this time around. And even when the game does flirt with irritation – the introduction of flaming, ash-like enemies does feel rather perfunctory – it’s so much easier to swallow down with a friend sat next to you.

Though Unravel Two only clocks in at around the 3.5-hour mark, there is a decent wealth of content on offer for the price – £15.99 on PSN and £17.99 on PC and Xbox One – with 20 unlockable challenge levels of tenacious difficulty, a wealth of collectables and also time trials. Hell, the game even dares you to try and complete each of its seven chapters without dying. The gaming masochists out there will surely love that.

Still, through and through this is a gentle, relaxing game about two adorable creatures helping each other traverse a series of treacherous environments, from the unforgiving wilderness to the oppressive terror of indoor machinery. Much like the first game, there is a peripheral plot here, yet while the original actually managed to subtly deliver a semi-affecting narrative, this time around things aren’t nearly as interesting.

The story, following two teenage boys on a journey paralleling that of the two Yarnies, is almost paradoxically vague yet hilariously unsubtle. Concrete information is kept to a blunt minimum, yet there are distinct, elemental images flashed in front of the viewer – especially relating to domestic discord – that don’t quite nail the artful, ambiguous vibe the first game better accomplished. Honestly, I wouldn’t have had a problem with the story just focusing entirely on the two creatures, because they’re plenty interesting enough. 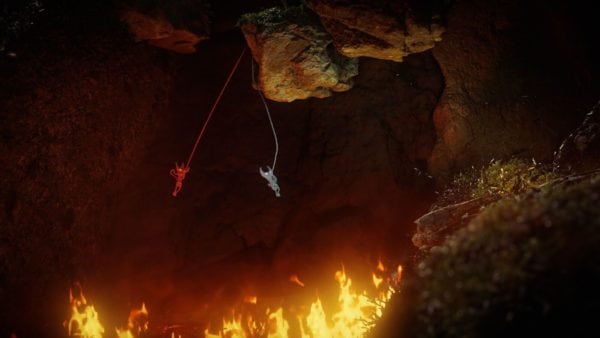 Visually, Unravel Two doesn’t look leaps and bounds ahead of its predecessor, and it absolutely doesn’t need to. The exterior environments in particular still look beautiful despite the obvious small-scale nature of the game’s production, which pays off especially splendidly in a late-game set-piece which features spectacular use of water.

Interiors look somewhat muddier and less majestic, in part because mechanical objects just aren’t that interesting to look at, but they’re still well-rendered regardless. Much like the first game, the sound work is meanwhile pretty subtle and unassuming, but again, the ethereal music score perfectly underlines the game’s whimsical, earnest tone.

There will be those who see Unravel Two as a bit of a step back from the original game because it’s “dumbed down”, but the greater general accessibility – such as including in-game hints and the ability to slow down time – opens the franchise up to a far wider audience.

Even more experienced players may welcome the less-refined, obscure puzzle elements being replaced with more obvious but also more immediately gratifying ones. If you’re still craving a mental workout when it’s all over, there are of course all those aforementioned challenge levels to feast on.

Though dialling back the frustration and amping up the breezy enjoyment is the key to Unravel Two being an overall more satisfying experience than its predecessor, the inclusion of co-op really is the pièce de résistance. It transforms an already endearing indie platformer into a gleeful social experience. 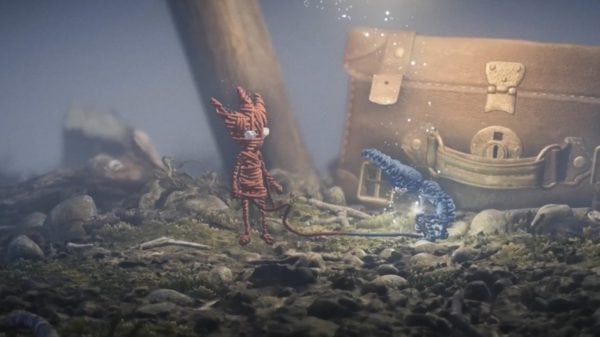 Pros:
+ It’s a delightfully charming, adorable follow-up.
+ The original’s frustrating elements are mostly gone.
+ Co-op is a fantastic pivot for the series.
+ Gorgeous visuals.
+ A solid amount of extra content.

Cons:
– The story is vague and unaffecting.
– Some may find the gameplay too “dumbed down”.
– Inclusion of game-y enemies is totally unnecessary.
– Disappointing lack of local co-op.

Reviewed on PS4 (also available on Xbox One and PC).