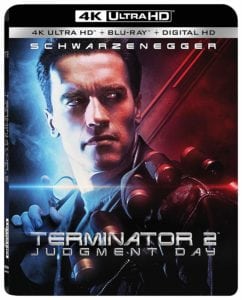 Terminator 2 is available for the 1,000th time on home video in a 4K edition that also includes a Blu-ray disc and a code for a digital copy. If you’re not a fan of the digital scrubbing that removes film grain but also gives a somewhat plastic look to a movie, you may want to avoid this one. The bonus features are recycled except a new 54-minute look back at the making of the movie. 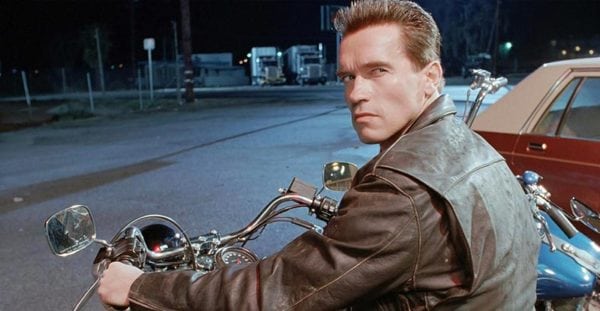 You’ve seen this one already, right? If not, I recommend you book a double feature tonight with The Terminator and Terminator 2: Judgment Day. However, if you’ve upgraded to a 4K world, you might want to pass on this release – more on that in a moment. (This is also the same edition released several months ago – Lionsgate reissued it because they also put out a new collector’s version that has a plastic mechanical arm in it. (No, reviewers didn’t get the version with the arm.))

Terminator 2 is one of those sequels that’s easily on par with the original and could easily be considered superior to its predecessor. These days, big-budget, effects-heavy movies come out multiple times a year, but T2 was released back when films like this were major events that were highly anticipated and meant to be digested and discussed all summer. I admit I miss those days – it was tough to wait a few years for a sequel, but it made the movie more memorable, even if it fell short of expectations.

In this case, though, T2 takes a concept that seemed a bit limited in the first film – with the Terminator destroyed, what do you do next? – and flips it on its head by making Schwarzenegger the good guy this time, which was a brilliant move. It was similar to what director James Cameron did with Aliens, where he made a war movie rather than another haunted house film.

With a bigger budget at his disposal, Cameron could also make the story bolder than the first one, giving us a glimpse of the story world’s dystopian future and employing some major set pieces that were pulled off before CGI made it a lot easier to put a big rig in a chase scene. However, it also marked a major milestone in special effects history: Lucas’s ILM effects house was brought in to use computers to create the liquid metal effect of the new bad guy Terminator. 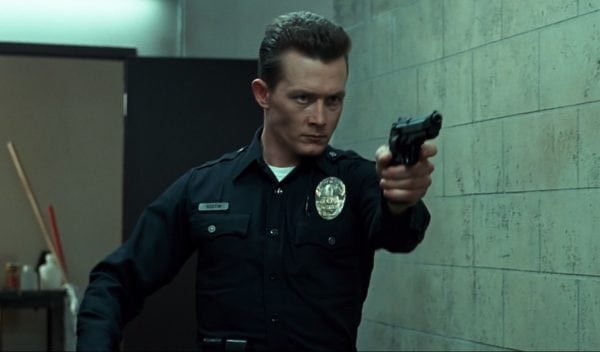 It was shot on traditional film, of course, and that brings me to an issue with this 4K release: It was scrubbed of the grain that’s often found in movies shot on film, which leads to a plastic-like look in many scenes. However, it also reveals little details that weren’t easily seen in previous home video releases, such as the texture of torn fabric around a bullet hole. Word on the Internet is that the movie was subjected to a grain-scrubbing to prepare it for a recent 3D re-release. It’s not clear if it’s what Cameron actually wants, although he must be aware of the backlash.

Personally, I’d rather watch a lower-resolution version of a movie that’s closer to what was originally shown in theaters, but your mileage may vary. There’s also something to be said for the argument that this kind of scrutiny is about nitpicking over the kinds of little details that most people don’t pay attention to. However, I wanted to let you know about this before you plunk down your hard-earned money for it.

This release also includes a code for a digital copy of the film as well as a Blu-ray with another copy of the movie and a batch of bonus features. The Blu-ray actually has three versions of the film: the theatrical release; a Special Edition that adds about 16 minutes of extra scenes, including more moments with character Miles Dyson; and an Extended Special Edition that one-ups the Special Edition with another new scene and a different shot at the end. I’m not sure why the 4K disc only has the theatrical cut.

The bonus features include a new 54-minute documentary, T2: Reprogramming the Terminator, that has Cameron, co-writer William Wisher, Schwarzenegger, Robert Patrick (the T-1000), ILM’s Dennis Muren, and others looking back on the making of the movie. (Linda Hamilton didn’t participate.) There’s plenty of behind-the-scenes footage included, along with some great shots of Patrick rehearsing the icy evil demeanor he created for his character.

The rest of the bonus stuff was previously issued. If you have that great two-disc DVD release from Artisan, you’ll probably want to hold onto it. Here’s what you’ll find:

A batch of trailers round out the Blu-ray platter.