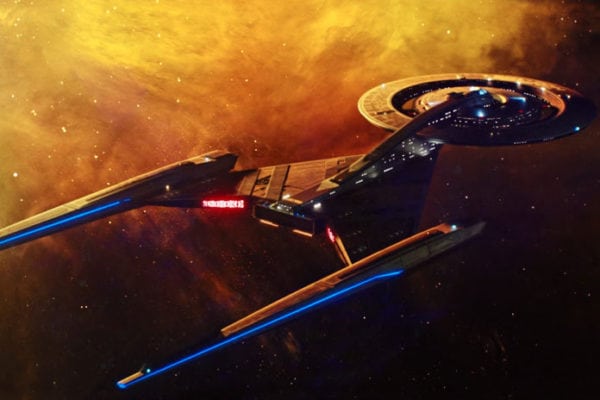 CBS All Access held its Star Trek: Discovery panel at the San Diego Comic-Con yesterday, and not only did we get a first look trailer for season two – which included our first look at Anson Mount’s Captain Christopher Pike, as well as confirmation that both Number One and Mr. Spock are set to feature – but it was also announced that the streaming service has ordered a short form spinoff entitled Short Treks.

Short Treks will consist of four episodes, running for between 10 to 15 minutes each, and are designed to explore key characters from Discovery whilst expanding the Star Trek universe. Two episodes will delve into the backstories of Saru (Doug Jones) and Tilly (Mary Wiseman), while Rainn Wilson’s Harry Mudd will return for another and the fourth will feature Aldis Hodge as Craft, a man who finds himself the only person on board a deserted ship.

“There is no shortage of compelling stories to tell in the ‘Star Trek’ universe that inspire, entertain, and either challenge our preconceived ideas or affirm long held beliefs, and we are excited to broaden the universe already with Short Treks,” said Kurtzman. “Each episode will deliver closed-ended stories while revealing clues about what’s to come on in future Star Trek: Discovery episodes. They’ll also introduce audiences to new characters who may inhabit the larger world of Star Trek.”

It has previously been announced that CBS is developing a number of new Star Trek projects, including a potential Star Trek: The Next Generation sequel featuring the return of Patrick Stewart’s Jean-Luc Picard. Meanwhile, on the feature film side of things, Paramount Pictures has Star Trek 4 slated to go into production early in the new year, while development continues on Quentin Tarantino’s own planned Star Trek movie.