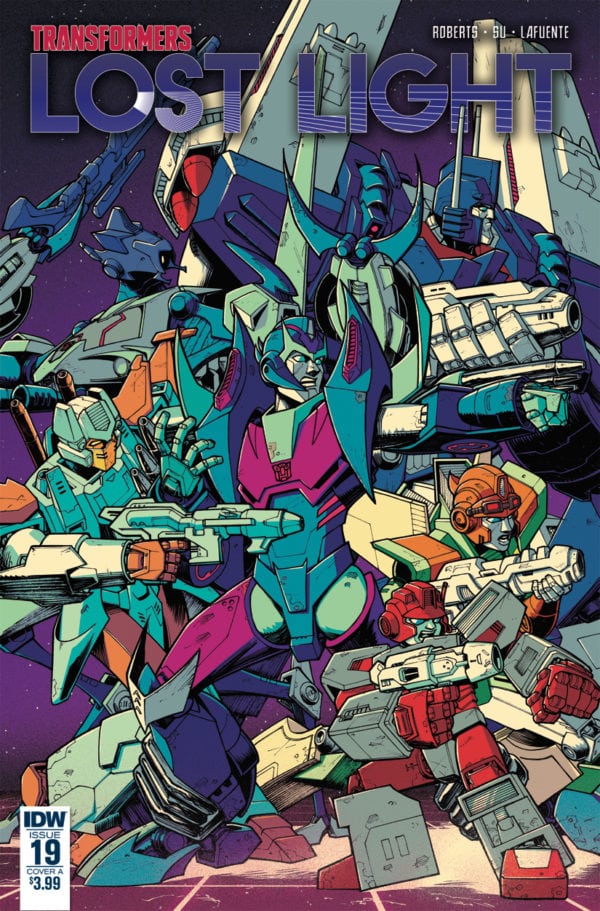 In Transformers: Lost Light #19, Rodimus and his team have finally caught up with Getaway and the mutineers of the Lost Light, though it seems Getaway’s methods have taken an even darker turn since we saw him last. James Roberts begins this climactic showdown in a tense fashion as Rodimus is put between his desire for revenge and protecting all the members of his crew, mutineers or not.

Things start off in an exciting way as the crew comes face to face with many of the mutineers who have now been turned into Sparkeaters thanks to Getaway’s loosening morals. It’s an exciting conflict as some of them debate whether to keep their former friends as safe as possible or kill them since they’re now monsters as well as traitors. It doesn’t just bring up a tough moral quandary for Rodimus and the others, however, but sees the return of the fan-favourite Dinobot Grimlock to the action. With the Lost Light crew, the Scavengers and now Grimlock coming together, not to mention the quest for Cyberutopia at an end, it really feels like Roberts is tying up all the loose ends in the last leg of the series.

One of the best aspects to the issue is seeing everyone working together as the Lost Light and Scavengers interact in more than just brief scenes. Their scenes are well balanced with lightness and seriousness as they try several ways to survive Getaway’s onslaught. Robert imbues the story with enough comedic moments yet still manages to provide insight on the characters and story progression. Rodimus thinking back on what Megatron taught him and how the former Decepticon would fight Getaway showed Rodimus thinking in a rational and clear manner, a far cry from his usual brashness and arrogant attitude. It’s just another example of how much he’s grown over the course of Roberts’ story.

E.J. Su does a good job with the art by making each transformer detailed in their appearance and movements. Some of the action could be a bit clearer, but he still does well and provides several great images, such as Grimlock’s superhero landing or Rodimus’ facial expression as he figures out his next move. Joanna Lafuente’s colours compliment his work nicely and make the visuals pop. She also plays around with much darker colours than usual, an apt aspect since this is a bit of a darker story for the series.

Transformers: Lost Light #19 is a good issue that begins to bring everything to a close with plenty of fun and deep character interactions. Roberts’ balance of the humour and drama is again clear while Su and Lafuente’s artwork make the issue a visual treat. Now that Rodimus is finally coming face-to-face with Getaway since the end of More Than Meets The Eye, it will be very interesting and exciting to see how this battle plays out.