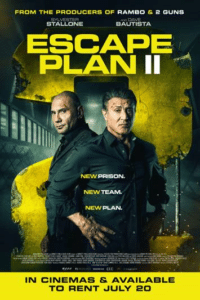 Ray Breslin is the number one expert when it comes to breaking out of the world’s most impenetrable prisons.  When a trusted member of his team disappears inside a computerised jail, he has to track him down and rescue him.  From the inside.

Five years ago, we were treated to the spectacle of Messrs Stallone and Schwarzenegger combining their muscle power for the ultimate get out of jail card in Escape Plan.  OK, it was no classic, but it was entertaining enough, in an over the top sort of way.  So a sequel, in the shape of Escape Plan 2 (nul points for the title), was inevitable.  What wasn’t inevitable was that it would be so bad.

Stallone returns as Ray Breslin.  Having broken out of one impenetrable prison with some help from Arnie in the original, he now has his own security company and a team of hand-picked experts.  Except that his judgement isn’t infallible.  One of the team goes rogue, while another is kidnapped and thrown into a hi-tech prison known as Hades, forcing Breslin to hatch a convoluted plan to rescue him, with help from the rest of his crew and a former associate (Dave Bautista).  Where’s Arnie when you need him?  He certainly dodged the proverbial bullet by not being in this one, handing over the extra muscle mantle to Bautista, who just about scrapes by in a supporting role. 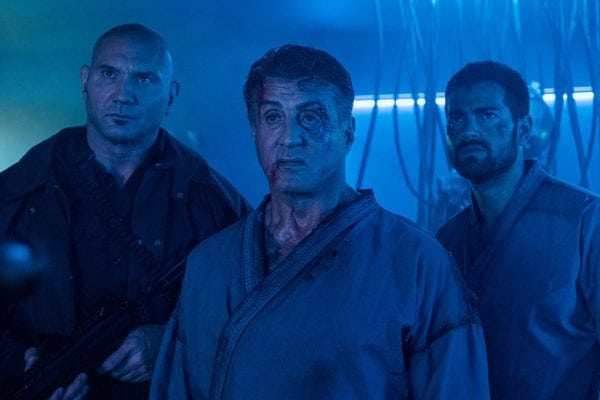 While the prospect of the Stallone/Bautista combo may not exactly send your expectations soaring, the reality is even worse.  The action, such as it is, might be confined to a prison but the film is completely all over the place and has no sense of direction whatsoever.  Any attempts at plot twists are either agonisingly predictable, downright farcical or both, the characters are at best two dimensional and the entire production looks cheap and shoddy: dazzling neon lights alternate with subdued lighting to cover up its shortcomings.  They’re fooling nobody.

Given that it’s supposed to be an action movie, you’d at least hope for some albeit fleeting moments of high-octane combat or just a smattering of tension.  You can live in hope.  Any action that you can spot is messy, confusing and about as exciting as a summer cold, and the whole film is deeply, deeply dull.

Yet, for some unaccountable reason, we’re going to be treated to Escape Plan 3.  It’s already in the can, due for release by the end of the year and even has the same writer, one Miles Chapman, who also wrote the original.  Stallone and Bautista are returning is as well.  One question.  Why??