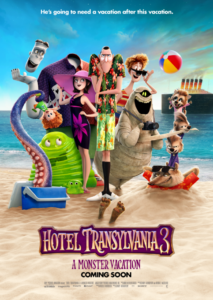 While on a vacation with his family, Count Dracula makes a romantic connection. By the laws of filmmaking and diminishing returns, the Hotel Transylvania franchise should start entering an area of fatigue and familiarity, and to a degree, this third entry entitled Summer Vacation does begin to show those signs, but writer and director Genndy Tartakovsky (returning once again for this latest installment in the series) has the risky but wise creative decision to shift focus away from the hotel entirely and into some new, but still fittingly monster oriented settings. Much to my relief, Hotel Transylvania 3: Summer Vacation is not about the gang heading on some earthly, human style getaway packed with jokes showing the freaks unsuccessfully mingling with other tourists, but a cruise specifically designed for monsters that pleasantly (from aesthetic and narrative standpoints) takes everyone on a ride from scuba diving and sightseeing an underwater volcano to the legendary city of Atlantis, which involves a Las Vegas type of casino for the creatures.

The reason for such a journey is simple enough and something that both children and adults can get behind; Dracula (once again voiced by Adam Sandler, and also worth mentioning is that his regular comedy buddies have also come back to put in more work on their respective characters) is beginning to feel the toll that crushing loneliness can take on even a vampire, despite the teachings that monsters only zing (basically, another way of saying love at first sight) once in their lives. Now, he doesn’t necessarily want to find another partner as he feels that would be an act of betrayal to his daughter Mavis (Selena Gomez), but he can’t help transforming into a puppy-eyed, soft mess of warm emotions around the ship’s human captain named Erika (Kathryn Hahn as one of the film’s welcome new additions). Of course, everyone else is unbeknownst to this, as they believe the real reason Dracula is along for the vacation is due to stress and exhaustion from maintaining business and upkeep at the titular hotel. As you can probably imagine, the secret isn’t locked away for very long, with his closest monster buddies quickly realizing what’s up just from the charmingly animated goofy sunken body language on the Prince of Darkness whenever Erika engages in direct line of sight or conversation. Tartakovsky turns this into a frequently funny exchange of misinterpretations from everyone involved, and it’s all cute enough in its repetitiveness to make audiences want to see the two start a new lineage entangling humans and monsters. Except for werewolves Wayne and Wanda (Steve Buscemi and Molly Shannon), who are enjoying freedom from dropping off their one-hundred children at the ship’s daycare center.

Aside from the major characters, one of the most admirable aspects of Hotel Transylvania 3: Summer Vacation is that Tartakovsky’s imaginative mind is frenetically on display by splicing in so many smaller moments of lovable monsters partaking in fun throughout the cruise. Furthermore, he isn’t afraid to do this via relegating them to the background or by giving them their own quick scenes, to the point where the activities and the sheer amount of fun to be had on the cruise takes on a story of its own. Swimming pool volleyball with a sentient ball anyone? All of this generates a level of energy that remains consistent throughout the brisk 90-minute running time; the plot is obviously thin and mostly predictable, but the attempts at humor lands more often than not, thanks to inspired animation, colorful visuals, and the feeling that the filmmakers genuinely enjoy seeing what shenanigans they can place these monsters into. There are two sequences toward the end that are just plain wild, including a DJ-standoff that had people in the theater from young and old singing along to a classic party song. Additionally, audiences are aware that Van Helsing (Jim Gaffigan) is going to make an appearance thanks to an opening montage of his plans consistently being foiled by Dracula and company routinely on vacation. There also seems to be an abrupt, jarring editing transition from the characters learning of the cruise’s existence to them actually boarding it, leading me to believe that there is some cut subplot involving monsters not wanting to travel because of the nuisance that this inexplicably hateful vampire slayer is even though he’s clearly terrible at executing his plots of murder. Nevertheless, in current times it’s wholeheartedly welcome that the protagonists decide to fight this unreasonable hatred with kindness, amounting to a positive lesson for kids and some close-minded adults. With that said, this franchise could get really weird really fast if they head down a certain path with two characters that is implied they might in the future.

Hotel Transylvania 3: Summer Vacation isn’t going to be up for any animation awards, but is far from lazy sequel fare. There’s even some effort put into the obligatory flatulence gag. It’s no different from the first two movies, but switching around the locations while staying true to the atmosphere adds a degree of freshness. It turns out you don’t actually need a hotel to feel like Hotel Transylvania; the monster cruise is a worthy substitute. It’ll be interesting to see how Tartakovsky approaches a fourth.