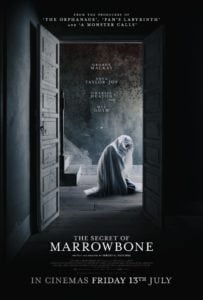 When her husband is put in prison for hideous crimes, a mother flees the country with their four children and seeks refuge in a remote house in America.  But her death means the children have to keep her demise a secret so they can stay together.  At the same time, they also have to face the horrors of their past. 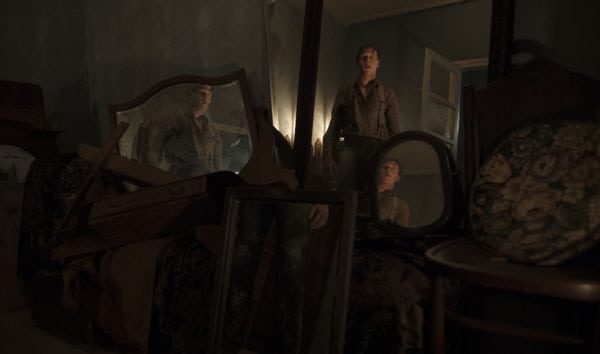 On the face of it, 2018’s love affair with horror continues this week with a film that follows in a couple of well-established traditions.  The Secret of Marrowbone is a ghost story – of sorts – and it’s also from the informal school of Hispanic horror.  Think del Toro and Bayona and add a third name.  Sergio G Sanchez.  Best known so far as a writer, for The Orphanage in particular, he’s now got his chance to direct, bringing his own script to the screen.

After their father is put in prison for some vicious crimes – and it’s strongly implied that he’s capable of much worse – four children and their mother escape him and England by fleeing to America.  They take over the rambling Marrowbone mansion in the depths of the countryside but, not long after the move, the mother dies and the four find themselves having to keep it a secret.  The oldest son Jack (George MacKay) is just two years short of his 21st birthday and can’t legally look after them, but the last thing they want is to be separated.  All they have to do is wait for a couple of years.  Then another, more deadly, secret comes in the shape of a bullet through the window …… 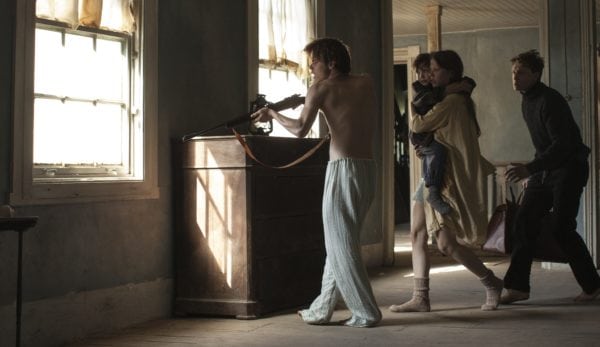 But here’s the rub – and the irony.  Despite Sanchez’s reputation as a writer, the film’s biggest problem is its story, especially its disjointed timeline.  He’s designed something with so many twists and turns that it becomes as labyrinthine as the never-ending mansion itself.  Its myriad of stairs and rooms means you often have no idea where you are and it’s often the same with the narrative. Sanchez may want you to stick with the story because all will be revealed in the end, but the truth is that he loses his sense of direction and so does the audience.  The result is confusion.  And that undermines the intention to create a horror: there are jumpy moments, a few chills and an effective sense of dark foreboding, but it never really makes the grade in the fright stakes, nor is it disturbing enough.  It’s better described as a dark family drama and one that, sadly, never really fulfils the promise of the opening sequences.

Even more disappointing is the ending, which is soft to the point of soppy, especially when compared to the earlier parts of the film.  Apparently that final scene was Sanchez’s second choice: he wasn’t happy with the first one and so re-wrote it.  It rather begs the question as to what the original was like and whether, in fact, is was more satisfying than what we’re given.  We’ll probably never know, but what we’re given is too soft focus for its own good.  Coupled with the general confusion and the blurred lines between reality and imagination suffered by one of the characters and the result comes close to being a proper muddle. 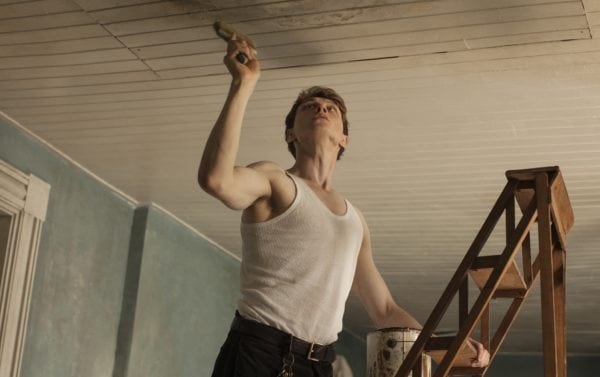 Thankfully, the young cast are game and committed, and there is a tangible bond between the four children.  George MacKay has the most satisfying role of all as the oldest brother, forced into being the adult, and it allows him to show his emotional range.  Who wouldn’t want a protective older brother like him?  It’s just a shame that Anya Taylor-Joy doesn’t get the chance to show off her abilities; instead she’s confined to being little more than the romantic interest.

The Secret of Marrowbone falls short on chills and thrills and would fall flat on its face if it wasn’t for its cast.  It’s a secret best left un-shared.