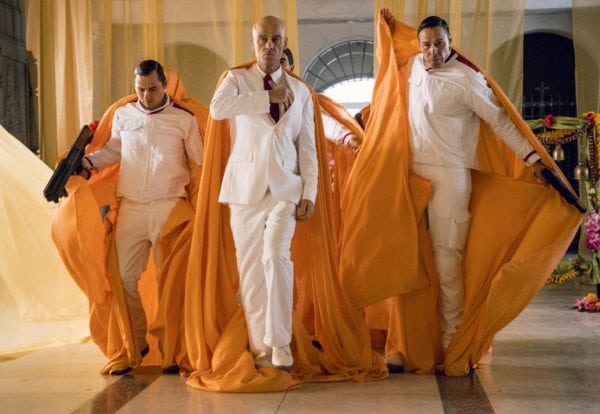 Extracting a soul appears to be easy involving wheels, levers and foot pumps coupled with numerous lengths of rubber tubing and eager operatives in tow to hold down poor unfortunates. Throw in the needles, screaming, unsterilized insertion of blunt metals through paper-thin skin and you have yourself another slice of Preacher dished up Louisiana style. Serving up implied underage sex, teachers with dubious moral boundaries and diabolical witch doctors who wheeze through scenes on motorised wheelchairs. Add a group of fanatics in white suits peddling their back up Messiah, whilst casually slaughtering saffron cloaked monks in Krishna temples and it feels like a homecoming.

Trying to pinpoint established themes and conventional approaches whilst Angelville hicks are attacking a plantation house with projectile goats is difficult. Romantic triangles between resurrected assassins, undead vampires and possessed priests are not in any meet cute play book manual people go out and buy. Normality is a subjective thing within this world of perverts, reprobates and miscreants who exist outside of society. Pip Torren’s return as Herr Starr still carries that undertone of perversion, unwavering loyalty to mission and Messiah whilst delivering witticisms dry enough to drain a river bed. Having proven a success throughout season two Herr Starr bizarrely represents the rational point of view here just as Jesse Custer loses his appeal. 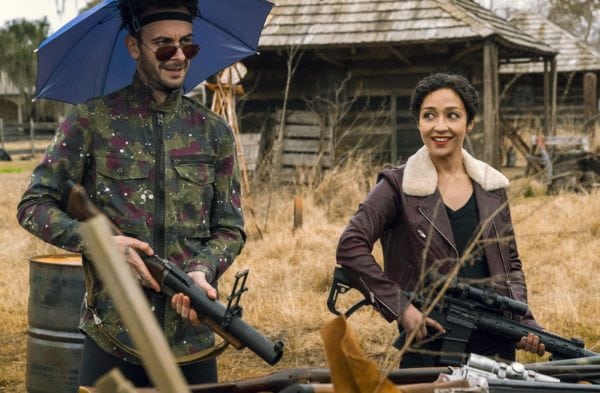 Morally questionable, manipulative and reliant on no one, Custer has continued to distance himself from Cassidy and Tulip as they have grown closer. Comedic Coen criticisms are still welcomed between our resident vampire and assassin in situ but the tone has grown darker of late. Betty Buckley has carved herself a niche in merely two episodes as Gran ma, while Jeremy Childs has used broad strokes to sketch Jodie as sordid and secretive in the same timeframe.

These love triangles, Grail preoccupations and religious genocides pale in comparison to the wheelchair bound soul sucker, consigning bad debtors to darkness as a means to maintain her youth. In the cold light of day then leaders being what they are, perhaps Jesse Custer would be a better choice than some for religious leader of a free world. Given our current popular choices could things be any worse.