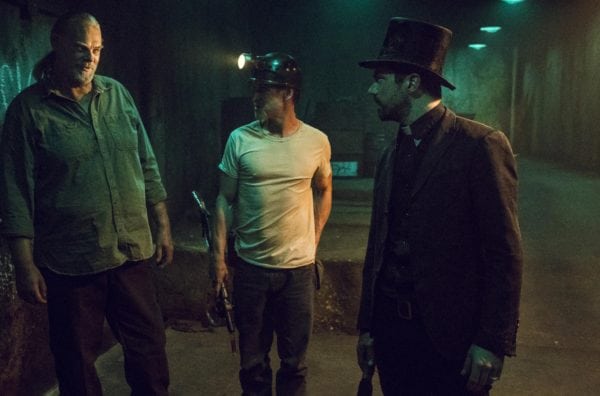 Choke chained cannon fodder for the overly enthusiastic fist fighting farm hand awaits anyone who fails to pay their debts in Angelville. Welcomed in by the boyish charms of a teenage ringmaster who watched too much Something Wicked This Way Comes, episode four delivers nut sack slaps and emotional gravitas in spades. Comic book clerical references from a Tim Curried depiction of the Devil accompany horse whippings by business suited angels of death. One sided conversations steeped in fire and brimstone add theatrics to a reintroduction of The Saint of Killers. Stoically monosyllabic, single minded of purpose and stripped of weaponry he welcomes us to the ninth level of Hell.

Elsewhere the human interest gains momentum with Cassidy packaged up, Jesse revealing more darkness and degradation beneath The Tombs while Tulip finds a new best friend. There seems to be a consistency and overall arc which is coming into play early on, as Angelville flashbacks reveal more about Custer which in turn maintains our interest. Characters are being broadened, new ones introduced and time is being spent giving them history, relevance and fully realised motives. No laughs are easy and often every episode counterpoints any humour with cold blooded moments of clarity. 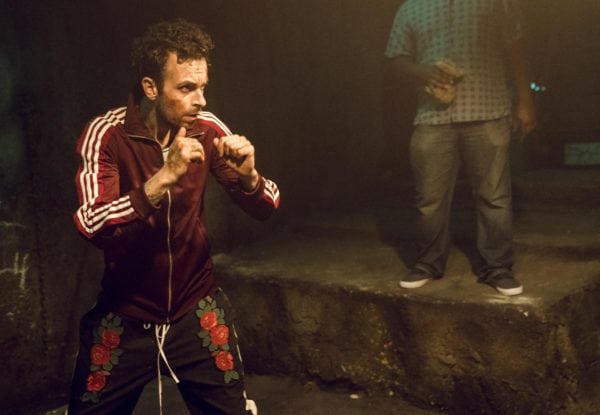 These graphic novel creations might well be exaggerated caricatures but their intentions, reactions and decisions are all too human. Cooper especially is muddying our take on Jesse giving him the essential dimensions which keep us watching. He is a grand manipulator, romantic rogue and brow beaten mummy’s boy. Allegiances to others play second fiddle to family when it suits, while his friends are ripe for sacrifice as long as it serves a purpose. Tulip and Cassidy are certainly three dimensional in every sense yet they exist at the behest of Custer and his whims. TC and Jody stand apart entrenched in Angelville mythology woven into the very fabric of what this place represents. Broken hearts exist alongside broken bones in this domain of the undead. Wheeled out, shackled and bound bargaining for liberation in a last chance saloon without redemption.

This is the only choice remaining when all others fail. An endless cycle of bloodletting both emotional and physical which promises no respite, no early bath or chance beyond the next fight. Rich in gothic tone and scored into the earth by an ungodly hand these tombs hold secrets, bury unwary visitors and make swift work of complacency in people of arrogance. As McTavish strides out of Hell with instruction you can only think that things are unlikely to improve.