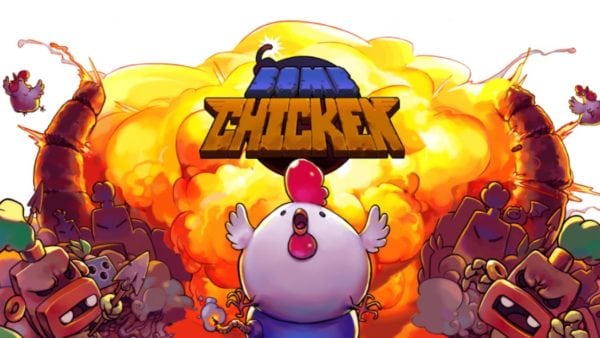 You know, one of the things I love most about games like Nitrome’s Bomb Chicken is the way the developers spin a fantastic yarn to fit the game, the character, the premise, the setting and more.

After a freak accident, a seemingly ordinary chicken becomes a bomb laying free range hero. Discover the darkest kept secret of the fast food giant known as BFC, their bestselling addictive blue hot sauce, and answer the ultimate question: Which came first the chicken or the bomb?

Now, I’m paraphrasing directly from Nitrome, granted, but isn’t that just brilliant.  It sets the tone for a quirky, chirpy, yet tough puzzle platformer where bombs become a means of solving your way through the BFC factory in your quest to uncover the secrets of their blue sauce.

Shades of Abe’s Odyssey in the storyline, odd shades of metroidvania styled gameplay, the game has you guiding our titular hero chicken through the factory, avoiding enemies and hazards in each room, collecting blue gems as you go to help you unlock and open the game up.

It’s a simple game to play and get into, but it doesn’t half ramp the challenge up very quickly.  Each room of the game presents you with a set of enemies, hazards or both to traverse that will pretty much always require some use of your bomb laying skills.  It takes a little bit of trial and error at first to understand the laws governing bomb laying and what you can do, something the game perhaps doesn’t define quite clearly enough, but isn’t really a hindrance.  Bomb Chicken can’t jump, so getting over obstacles or up to platforms relies on you laying enough explosive eggs to get you where you need to be.  Care and caution need to be taken though, as each bomb naturally has a fuse that will start to burn down as soon as it’s laid.  Chain reactions can easily be started if you’re not careful, and being caught in the explosions will invariably kill you. 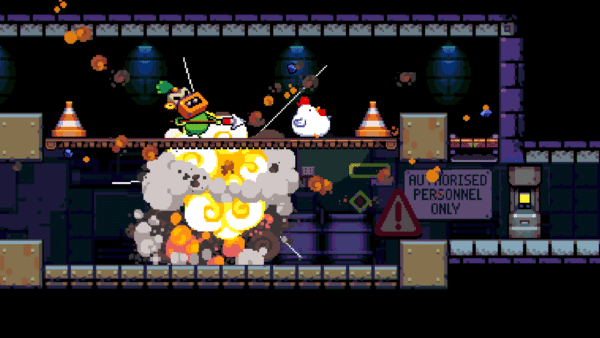 Traversing the rooms isn’t the only use your bombs have, naturally their explosive nature can be used to take out enemies within each room as well, but care again needs taken when dealing with them, especially those that can fire weapons and set your bombs off early, usually taking you with them!  You can also push bombs that you have laid, which is a key part of the puzzle elements of the game.  At times these can be used to activate switches within an area too small for our feathered hero to reach, or used to clear areas of a room that unlock additional secret chambers with bonus loot.

As the game progresses and you’re well versed in the art of bomb laying, it doesn’t half expect some cunning feats of manual dexterity and bomb use to get your way around, but that’s ok by me as it never felt like the game was playing unfairly, just that I didn’t have the necessary speed or skills to defeat it.

OK, at the end of the day this is puzzle platforming 101, but Nitrome have pulled it all together into a delightful but at times deadly package of feathers and bombs that is incredibly easy to play, but not afraid to take prisoners with some devilishly intricate platforming designs.

Pros:
+ Easy to pick and play, difficult to master
+ Good puzzle dynamic with the use of bombs
+ Who doesn’t want to play as a hero chicken who can lay bombs?

Cons:
– Difficulty ramps up very quickly in places
– It’s not really anything we’ve haven’t seen before