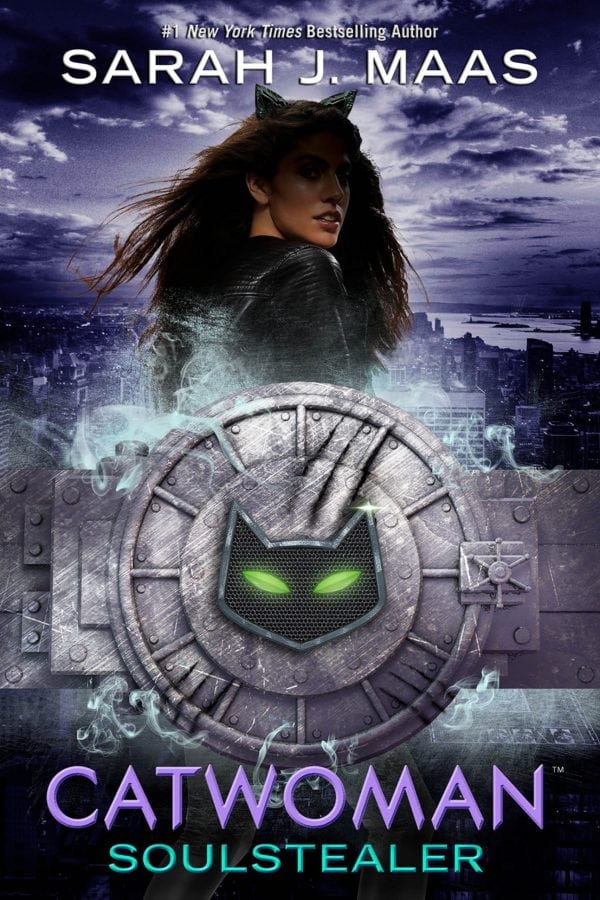 The next instalment of the DC Icons series is here as Throne of Glass author Sarah J. Maas takes on on of DC’s most recognizable villains and sometimes hero, Selina Kyle aka Catwoman. With Catwoman: Soulstealer, Maas writes an engaging tale of Selina’s origins into Catwoman and her first escapades throughout Gotham City, meeting Poison Ivy and Harley Quinn while coming into conflict with Batwing in a change from normal continuity.

Much like Wonder Woman: Warbringer and Batman: Nightwalker, DC Icons’ Catwoman: Soulstealer reimagines Selina Kyle’s origins as Gotham’s infamous burglar with some nice twists and surprises to the mythology. Maas presents an intriguing tale that focuses on Selina’s journey into one of the world’s most successful thieves while examining her balance between becoming a scourge of Gotham and an actual decent person.

Maas has a good handle on Selina’s character, capturing her voice and behaviour fairly well. It is easy to root for Catwoman even as she robs people blind and makes a fool out of Batwing on more than one occasion. Selina’s intelligence and craftiness is clear, but Maas is able to explore the hidden depths to Selina’s character that she often tries to hide, such as how much she cares about the underprivileged of Gotham or the allies she makes along the way.

Maas also makes a nice distinction between Selina and the socialite persona she hides behind, Holly Vanderhees. When seen from Luke Fox’s point of view, it definitely doesn’t seem like Selina at all as she acts like she’s belonged in the world of the rich and famous all her life, yet in Selina’s POV it’s clear just how much she hates being around Gotham’s elite. As the book goes on and Selina tries her hardest to come across as a cold criminal as Catwoman, it’s an interesting shift when more of the positive characteristics Selina tries so hard to hide starts bleeding more into Holly, especially as her relationship with Luke grows.

On that note, it is a very interesting change for Batwing to be given Batman’s role in the cat-and-mouse chase between the hero and master thief. With Batman gone on an unknown mission, it’s up to Luke Fox’s Batwing to keep the peace in Gotham after having recently returned from his overseas military deployment. Maas writes Luke very well and focuses a good amount of time on Luke’s PTSD and his fight to overcome it. Seeing his relationship with ‘Holly’ change over the novel feels fairly real and relatable and evolves nicely as Maas takes her time building them up. She also focuses on his unique perspective in being not only an African-American superhero, but also a very rich black man from one of Gotham’s most respected families who still has a somewhat tense view on Gotham’s police force. Because of this, Batwing is one of the book’s best aspects.

The supporting cast are also well utilized as Maas brings in several familiar faces into the mix. Though characters like Commissioner Gordon or Lucius Fox could have been used a bit more, Maas’ take on Poison Ivy and Harley Quinn, and their relationship with Catwoman, is quite strong with some good exploration into their characters. Harley is the traditional Harley from most continuities, one who is somewhat obsessed with The Joker and yearns to break him out of Arkham, while Ivy is presented as a much more sympathetic and friendly figure than she typically is. The friendship between Catwoman and Ivy feels genuine, making it easy to see why Selina is able to forge a stronger connection with her.

The novel’s story moves along at a nice pace. There are hardly any moments where events feel too slow and Maas has some great fun depicting Selina, Harley and Ivy’s thefts, including a very memorable one that is set to some music you can’t help but hear in your head. Maas makes the story feel more than just typical superhero and cops-and-robbers fare, though, by the amount of focus she places n Luke’s PTSD or to Selina’s deeper reasons for doing what she does. There are also a few surprising connections to the wider Batman world as well as some cool cameos throughout the book.

Catwoman: Soulstealer is a fun and appealing book that delves into Catwoman’s character and what makes her tick. Maas’ take on Selina is in character while the changes she makes to her origins are interesting and refreshing, especially in regards to the bonds she makes with Ivy and Harley. It is a well-written adventure that will have Catwoman fans purring with delight.