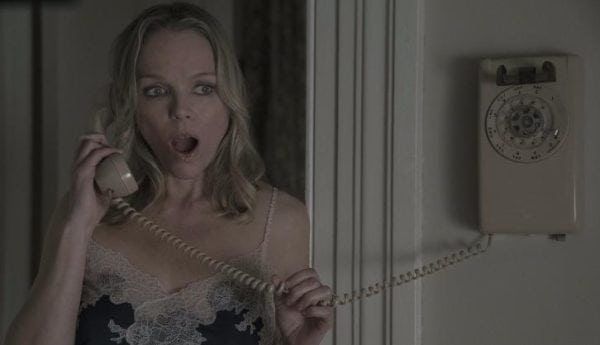 Pent up recriminations, adulterous spouses and murderous intent culminate in a blood drenched boarding house this week, as Castle Rock welcomes fresh meat. Quintessentially middle class with highbrow intellectualism to cloak emotional turmoil, these new comers seem the perfect fit. However within ten minutes this picture postcard depiction of domestic bliss is split wide open and invaded by unseen forces. Contemporary Americana is left shattered, decapitated and bleeding into the carpet as our newbies are left with a dripping axe blade, barely contained bile and murder one on their resume.

Across town a sleeping Ruth Deaver is oblivious while Pangborn remains holed up in the outhouse chilling. Warden Lacy presses his influence on this town from beyond the grave through hand painted portraiture, dismembered mannequins and a pervading air of creeping dread. Skarsgard slopes around town between the Deaver house and Strand residence while carnage follows in his wake. More than anything that unnameable dread which permeates Castle Rock provides the most unease, as good people make bad things happen. 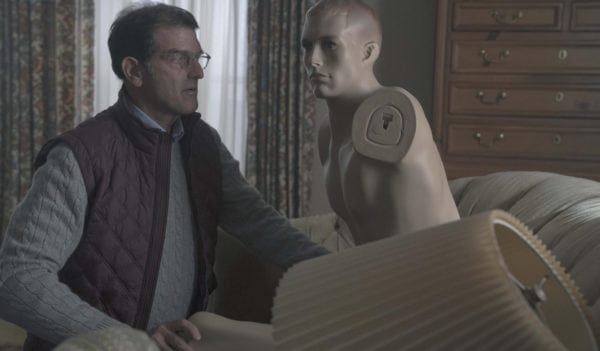 This is where Castle Rock finds its strength in realistically maintaining mystery. Andre Holland, Melanie Lynskey and Bill Skarsgard each carry their own burdens through character, feeling the weight of uncertainty and possession take hold. As breadcrumbs are dropped and paths revealed there is a sickening sense that forces beyond this town are coming home to roost. Bin bags full of body parts, psychotic episodes from the seemingly sane clash with the aftermath of dementia driven homicide. Psychic links track people through the woods whilst letting others into secrets best kept hidden. Past associations are dragged back up, personal aspersions are levelled and those with a conscience keep their distance. Recriminations and name calling hide deeper seated insecurities and burgeoning fears as psychological responsibility is taken on by those least prepared for it.

Similar to Ira Levin’s Stepford Wives this slice of Americana hides much behind the picket fence sensibility and small town preoccupations. Castle Rock could be a metaphor for public feeling in the wake of their current administration, a morality tale for those who fail to acknowledge their shortcomings, or simpler yet it could just entertain people. Whichever side of the line you fall there is no denying the impact this programme has had so far, nor how much more influence it could wield come the season finale.