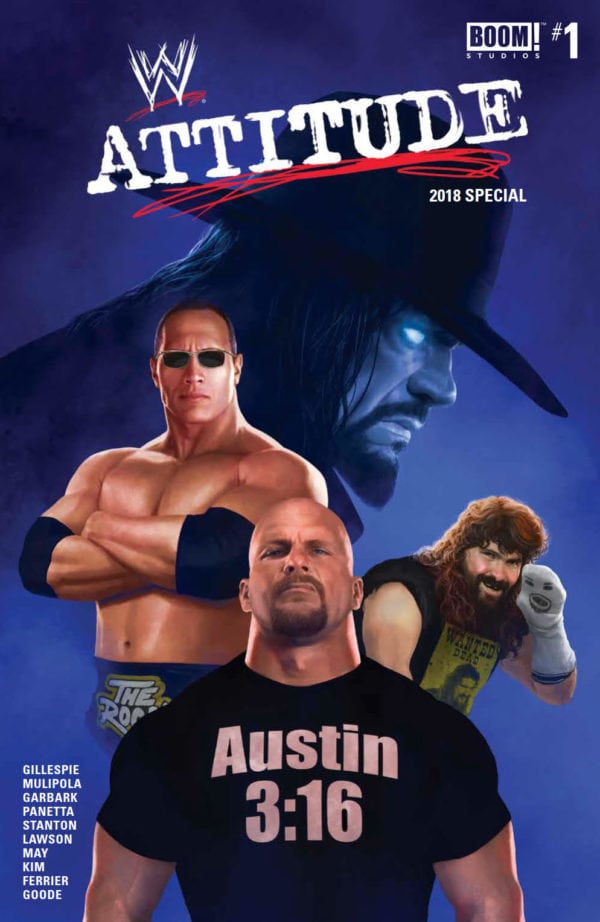 The Attitude Era is the most beloved period in the WWE’s history, and there are plenty of iconic and memorable moments for the writers to pick from for the issue. This volume tells four stories from the period, and like most of the WWE anthology comics, it is something of a mixed bag.

The first story in the issue is ‘Funeral for a Rattlesnake’, written by Aaron Gillespie. The story sees Stone Cold thrown into a river by The Rock, before rising again to beat him down on an episode of Raw. It’s a well-drawn piece, with Michel Mulipola’s artwork jumping off the page and really capturing both The Rock and Austin, but from a character perspective, it all feels a little too odd. Austin was rarely the reflective type, so having him reflect on his career before beating down The Rock, who is really quite sinister here, never really feels like a true re-enactment of the two’s history.

The second story, ‘3 Faces of Foley’, on the other hand, perfectly captures the insanity of one of the era’s most beloved superstars. Foley is the perfect wrestler for a comic book, and the depictions of him here, as they have been in the previous Boom! Studios’ comics are excellent.  We see all three faces of Foley sitting down and discussing who has had it the hardest throughout their careers, and this leads to some really amusing exchanges and some nice trips down memory lane. The arrival of Foley himself brings it all to an amusing end, and I’d like to see Foley given more pages in these comics in the future. The artwork is not as strong as it was in the first story, but the dialogue is whip-smart and this is easily the most enjoyable thing in the issue.

The third story tells the tale of the first ever women’s main-event on Raw, which took place between Trish Stratus and Lita. While 2004 isn’t strictly considered The Attitude Era, this is still a nice way of telling the story of two of the Attitude Era’s most iconic female performers. The artwork here is excellent throughout, especially when depicting the in-ring action, and the story being told from a neutral perspective, as opposed to one of the superstars, makes for a welcome change.

The final story in the comic is arguably the weakest. ‘Behind Enemy Lines’ tells the story of DX’s iconic invasion of WCW, except, it decides to completely change the narrative and turn it into a Kliq themed story. While I often enjoy the comics adding something to the story, this one felt like too much of a leap, and it almost felt as though Triple H and The Kliq themselves had somehow managed to get their hands all over it. Series regular, Kendall Goode illustrated the piece, and that is probably the strongest element of the story. You can probably avoid the rest of it.

On the whole, WWE Attitude Era #1 is worth buying simply for a trip down memory lane. As with most of these anthologies, the quality is somewhat inconsistent but it is worth buying on the strength of ‘3 Faces of Foley’ alone.