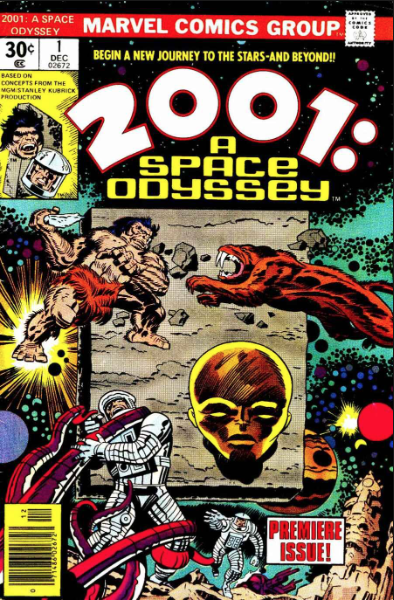 In 1968, Stanley Kubrick released his seminal science fiction classic, 2001: A Space Odyssey. Inexplicably, eight years later in 1976, Marvel Comics obtained the rights for a comic book adaptation. Jack Kirby, having returned to the House of Ideas after an all too brief dalliance with DC Comics, was more than ready translate the influential film into four-color print, and expand upon the original ideas in an ongoing series.

This year marks the 50th anniversary of the film’s release, and with it comes a beautiful 4K restoration and IMAX theatrical re-release (playing this week only); efforts spearheaded by filmmaker Christopher Nolan. Today also marks the 101st birthday of Jack Kirby. What better time to look back on this beautiful, but sadly never reprinted series.

2001 was a film as monolithic as dark obelisks that advance its whirling plot. More so, even, considering most mid-sized sedans dwarf these Monoliths. The film has been analyzed more than War and Peace at this point, and rightfully so. It’s a masterpiece in the most honest sense of the term. Thus, I’ll spare you any further prodding into those well-mined depths.

More importantly is the impact of the film upon Jack Kirby. If you are unfamiliar with Kirby, the brief rundown is that he created or co-created almost every notable character to come out of Marvel in the 60s, Darkseid and the rest of the Fourth World mythos (and many other things) at DC in the 70s, and co-created Captain America with Joe Simon in 1941. This description hardly does the man justice, as he probably had one of the greatest imaginations the in all of the 20th century. For the moment, suffice it to say that by 1968, having been in the industry for 30+ years, the man had a healthy body of work behind him. More than enough for any man to be content with. But three very important things happened to the King of Comics in ‘68. The release of Planet of the Apes, the release of a book entitled Chariots of the Gods? Unsolved Mysteries of the Past (a pseudoscientific slog by any standard, largely responsible for the popularization of the ancient astronaut theory), and the release of 2001: A Space Odyssey.

If you have knowledge of the film, you can see where the latter two might intersect. Now, pre-human travelers to Earth was not a new concept for Kirby. He and Stan Lee presented the idea of intergalactic colonizers with the Kree in Fantastic Four issues #64-65, when Ronan the Accuser is sent to judge the FF for tampering with a sentry left dormant well before the dawn of man. However, much like Tom Waits hearing Captain Beefheart for the first time, you can see a fairly clear dividing line in Kirby’s work, before and after these influences. Some of the aesthetics of the 2001 slowly crept into his work. True, some of the film’s design looked Kirby-esque to begin with. I’d find it difficult to believe that whoever designed the space suits had never picked up a Kirby comic. Other aesthetics, such as the all-seeing robotic eye and dizzying sci-fi corridors, were now in the Kirby lexicon to stay. 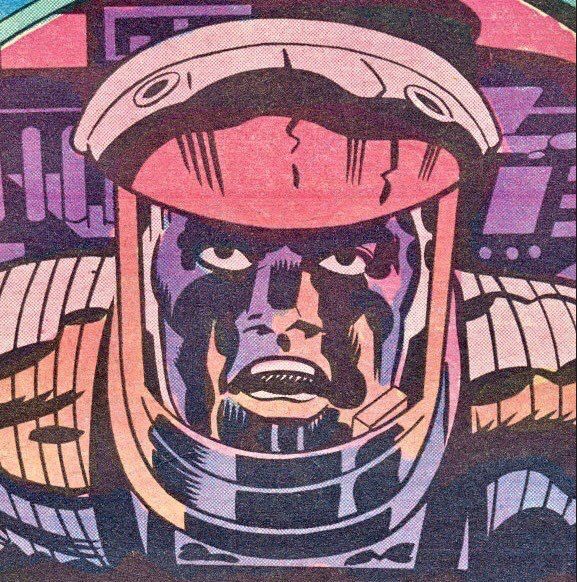 Conceptually, these influences would lead Kirby down a long path that he’d continue to mine for as long as he was churning out new concepts. At DC, he introduced O.M.A.C., the One Man Army Corps., looked over by the ever-watchful Brother Eye. Kamandi clearly took its animal-dominated-earth concept straight from Apes, though its wild stories are incredibly original. Devil Dinosaur and The Eternals, both books he developed upon his return to Marvel, deal with ancient astronaut ideas, and Devil Dinosaur follows Moonboy, a pre-human ape-like creature who has become self-aware, much like the proto-humans at the beginning of Kubrick’s film. Even his run on Black Panther, when he gave T’Challa (his creation) his first eponymous solo title, did not escape the influence of Clarke and Kubrick, as we see a future with beyond-human human evolutions with giant heads, living in a planet of modular cells.

The influence came full circle when, in 1976, Marvel acquired publication rights for an adaptation of the film that was already considered a classic. It’s speculated, though hardly confirmed, that Marvel’s purchase of the rights was part of the deal Kirby signed when defecting back to Marvel from DC. Whether by chance or design, the King’s intersection with Arthur C. Clarke’s material should have been a match made in heaven. Some would argue that it was. Personally, I’m with that crowd. It’s a divisive issue for the few who know or care, however.