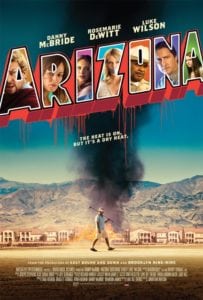 Set in the midst of the 2009 housing crisis, this darkly comedic story follows Cassie Fowler, a single mom and struggling realtor whose life goes off the rails when she witnesses a murder.

Set against the notorious financial housing crisis, Arizona (directed by longtime assistant director and frequent Danny McBride collaborator Jonathan Watson) poises itself to be one hell of a black comedy/slasher where the aforementioned comedian’s talent is funneled through a total sociopath determined to murder any witnesses to his accidental crime in a burst of, uncommon, rage (an uncredited Seth Rogen turning in a fun cameo as a weasel of a real estate company manager). Divorced working mom Cassie (Rosemarie DeWitt fine enough here although given little to do but deliver bloodcurdling screams, protect her daughter Morgan, and hide from the killer, which when it is Daniel McBride we’re talking about amounts to a live-action reenactment of Elmer Fudd attempting to slay his greatest adversary Bugs Bunny) is present for the act of violence, and her knowledge from working in the real estate business is going to be her greatest key to survival.

Well… no, but it should be. The first 30 minutes of Arizona are actually quite tense, not only feeding Danny McBride a ridiculous number of gold lines (the material ranges from him showing off his house, rambling about his family, talking out his failed business endeavor at mixing wine and ice, and delusionally telling himself that he is still a good man despite having unintentionally killed someone and has now kidnapped a woman after brutally assaulting her with a foreign object), but also is a portion of Luke del Tredici’s script that depicts the hostage situation as a game of wits to escape. For whatever reason, Arizona abandons this execution that is working very well for it, devolving into a series of slasher movie clichés; the goal here certainly isn’t to empower women, but rather abuse them and, adding insult to injury, have them stumble around falling over during foot chases and make all sorts of groan-inducing mistakes. 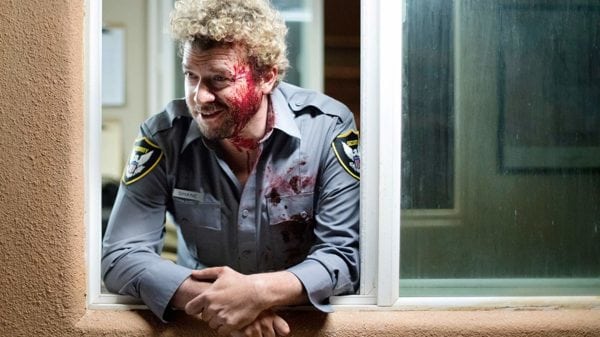 Here’s the thing though; I actually don’t care about that in this case, because not every film needs to be some grandstanding statement of political correctness. The problem with Arizona is that once the one-on-one maniac and survivor dynamic is done for, the script’s misguided solution is to introduce and reintroduce more characters, and all it does is create moments of dead air and failed moments of humor. Cassie has an ex-husband (Luke Wilson) on the way, Danny McBride’s ex-wife (Kaitlin Olson) walks in on the messy situation, random cops find themselves entangled in something spiraling more out of control by the second, when all you really want to see is Danny McBride say more outrageous shit and continue to be the world’s dumbest serial killer.

Keep in mind, Arizona doesn’t even reach 80 minutes not counting its ending credits. During the climax it feels as is the film might find a way to recover with a memorable finale, but the resolution to all of this chaos isn’t exactly exciting; it’s a nice callback to something mentioned way early on in the movie, and that’s it. For a movie that is comfortable treating its violence against women as an uncomfortable punchline (you can’t convince me that the mannerisms and movements behind Danny McBride’s actions aren’t meant to give the violence a dark comedy spin), the comeuppance enacted is largely unsatisfying. It also doesn’t help that any semblance of social commentary regarding the housing crisis of the late 2000’s is dropped, when again, in the opening act the writing does seem to be attempting to get to the bottom of who is worse, a murderer or a shady real estate agent selling your garbage and effectively screwing you out of a roof over your head.

It’s also worth noting that there is a lot of bloodshed, likely as a plea to keep audiences watching and moderately entertained. There’s a lengthy stretch where you just want to see the mother-daughter (the latter of which is played by relative newcomer Lolli Sorenson and is admittedly empathetic as she cries for her father to arrive and generally behaves terrorized) combo fight back. Let’s face it, Danny McBride may have a revolver, but he’s also still a total goofball with a bad back who gives both characters multiple opportunities to turn the tables. Unfortunately, when the women finally do just that, Arizona has gone from hugely entertaining black comedy to generic slasher fare. You can almost feel the life being sucked out of it once the film expands from an isolated hostage situation to a neighborhood cat and mouse game piling on characters.