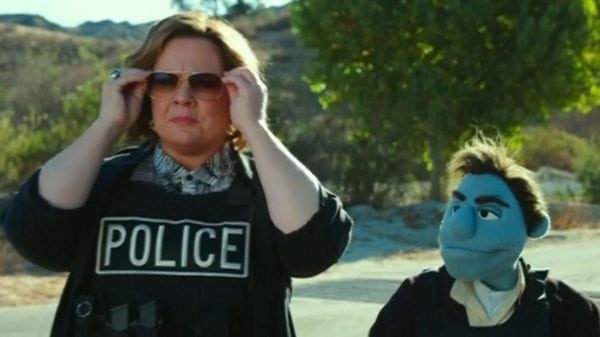 The Happytime Murders, or Holy Shit, These Puppets Fuck: The Movie, is a crime against manikin and human entertainment alike. All the charm of a lobotomized Saturday morning mascot being forced into naughty over-the-top-ness for the sake of “#edgy.” All the half-cocked “street” meanness promised by poster taglines. This is – by no exaggeration – a joyless, dead-on-arrival “comedy” that never hits any faint notion of a stride. Dumbfoundingly generic film noir plotting, humorless carnal puppet exploitation, on-screen energies like every actor’s been brainwashed into participation – easily the most *awkward* screening I’ve ever attended. Pure silence. Just a room full of audience patrons trying to figure out what the hell went so wrong for this continual trainwreck to keep crashing farther down into a neverending canyon.

It’s hard to imagine 2018 moviegoing much worse than this – and I watched Ahockalypse.

Bill Barretta voices blue-colored private eye Phil Philips. Once the first puppet LAPD officer, expert-marksman Phil is removed from duty after a missed headshot kills an innocent bystander and leaves Det. Connie Edwards (Melissa McCarthy) wounded. It’s been years since the incident but Edwards still hates his guts. Surely they couldn’t work together again…until “The Happytime Murders” case opens. Once a groundbreaking television show, “The Happytime Gang” enters syndicated which means major paydays for all stars involved. Well, it *would* mean a payday if someone wasn’t killing the actors one by one. Phil, as a consultant, and Det. Edwards must set aside their differences and stop L.A.’s latest serial murderer before cotton insides decorate all of California.

Hope you find puppets saying the word “fuck” amusing because that’s the insulting simplicity of The Happytime Murders. Writer Todd Berger pushes all-in on Phil and Edwards’ constant string of obscenities but forgets to write a thrilling noir case or R-rated Muppet farce. Fuzzy felt faces are seen inside pornography shops, pressed against frosty glass doors during hardcore puppet sex, strung-out in “sugar” dens – you know, where you’ve never seen puppets before! Except for when Team America executed this schtick over a decade ago and infinitely better? Or remember that Chappelle’s Show skit where knockoff Muppets sing about STDs? Imagine that sketch drawn into 91 agonizingly unfunny minutes with zero expansion of themes. Welcome to my sad-time hell. For a brief second, director Brian Henson dangles racial marginalization as if commentary might clue The Happytime Murders into ongoing national dialogues. Det. Edwards calls Phil “Blue,” extreme prejudice against non-humans is depicted, puppets are made to be second-class citizens, and that’s all within the first fifteen or so minutes. Then Henson throws any relevance out the window because it’s way funnier when puppets spray Silly String around their office to replicate the act of ejaculation, a gag fully exposed in red-band trailers that stunk of marketing desperation. Sell your top-notch raunch and hope audiences turn up to see more, only to let them down by wasting all the “best” gags on pre-release attention.

It speaks volumes when you can’t even challenge Bright’s take on institutional oppression. Worse off, The Happytime Murders truly doesn’t care to.

Comedy is…non-existent. Stale as a year old Italian loaf. You could count my laughs on one finger thanks to Maya Rudolph. Nothing to do with her character, mind you. All supporting female characters – puppet or human – are written as whores, nymphos, strippers or ditzes. A satire on film noir stereotypes of yesteryear? Or lazy, misogynistic bullshit amplified by an inability to understand what satire even is. You decide. (Just kidding, it’s the latter).

Henson hopes you’ll laugh at a sex-shop gag where an octopus milks a cow with erotic implications, or at a Basic Instinct interrogation where you glimpse purple puppet pubes, or at Goofer offering to suck Det. Edwards’ dick for 50 cents. Maybe chuckle at multiple references to Melissa McCarthy’s character reflecting masculine characteristics or MULTIPLE takes where Joel McHale’s bargain-bin FBI agent answers “What?” to “Asshole says what?” puns. I say “Henson hopes” because he’s got nothing else. The Happytime Murders uses that Basic Instinct shot not once, but TWICE. Hard times when you’re recycling your own joke in hopes of doubling-down on the same shock response. Chemistry is lacking like a dummy that’s yet to be stuffed with fluff, as performances of the flesh are phoned-in beyond recognition. McCarthy’s entire persona is she’s a “sugar” fiend (maple syrup and crystalized candy are puppet drugs) because of her replacement puppet liver. Even when “doped” out of her mind, it’s just McCarthy cycling through expected motions on elephant tranquilizers. Doubly so for McHale. Elizabeth Banks strips for bunnies and “bites the tip,” but her arc is lost to the wolves of paint-by-numbers crime predictability and Barretta’s sleepy narration like Robert De Niro accidentally drank Zzzquil. No one here seems to be interested in acting their particular scenes, which could all stem from being forced to emote against puppeteered partners.

On the topic of puppeteering, Phil’s kind are free-moving in the sense that green-screen artists are digitally removed from the final product. Puppet characters dance, mingle and are head-to-toe in focus without any strings, except for a CGI gloss when legs wobble unsteadily as “movement.” It’s an unnatural look that could have used some more digital sprucing but exists as needed. Puppets are supposed to be different anyway, who’s the wiser? At least Henson’s design team cobbled together a varied cast of henchmen goons, gangster bulldogs, and may other puppet personas for a cornucopia of looks.

We ain’t never seen puppets like this before, and for the sake of cinematic integrity, I hope we never do again. The Happytime Murders is an inept face-plant of a braindead “Puppet’s Gone Wild” routine (not really a comedy, even). Nothing works, 90-ish minutes feels like an abysmal eternity, and there isn’t a single scene worth audience relief. From Phil’s first narration we’re lulled into a moviegoing slumber that’s only worsened by horrendous editing unable to maximize tone or atmosphere (case and point, the film’s final cut to credits). A film that literally shoots its load mid-trailer and has nothing else to offer. Truly, I ask – who is this movie for?