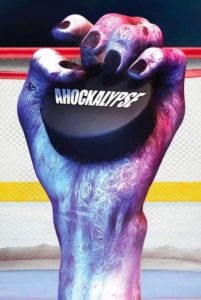 After winning the championship cup, Jonsey and his team must survive the zombie apocalypse.

Wayne Harry Johnson Jr.’s Ahockalypse wants to be Goon meets George A. Romero, but this knucklepuck of a dreadful horror comedy misses the net, Plexiglas boards, safety netting, and doesn’t even land in the same arena. Characters would rather (exhaustively) reference Home Alone for the umpteenth time or strip to their skivvies than honor even halfway decent zombie beats – when actors aren’t reading off cue cards (I swear, watch their eyes) or LOOKING DIRECTLY INTO THE CAMERA. This is, to put it politely, an offensive and frustrating form of horror-name-desecrating torture that’ll do nothing but enrage genre fans. Watch Goal Of The Dead if you’re in the mood for sports hysteria meets undead gruesomeness. Different sport, infinitely more watchable results.

In this loose resemblance of a walker apocalypse, Jonsey (Jesse Rennicke) and his recently-crowned-champion hockey teammates are attacked by zombies. Their objective is to run through town without getting eaten. After multiple encounters with other survivors go awry, final decisions are made to hold down their local ice rink like “the Alamo” (which, according to a supporting character, is French for “ice cream”). This is after Mad Max: Fury Road cos-players try to kill them and Jonsey’s unfaithful girlfriend Jenny (Kaylee Williams) attempts the same. Then comes one final stand against their now-zombified Icecats rivals, except this time…victory lasts forever.

Ahockalypse and Johnson Jr.’s treatment of zombies is as slap-in-the-face as they come. Even considering the film’s painfully obvious budgetary constraints, there’s no excuse for *multiple* shots to not even bother dressing extras in “zombie makeup.” Instead, *black CGI silhouettes* whipped up in After Effects are sloppily plopped onto streetside backdrops while maybe one or two OBVIOUSLY GREEN-SCREEN-SHOT ON A DIFFERENT DAY munchers lunge in the general direction of running actors. I’ve seen better photoshop hacks on the internet using MS Paint, frankly – and then the zombies we *do* get in-scene? Half the time they’re not even in makeup, or lighting renders soft touch-ups unnoticeable. In any case, don’t expect festering zombie wounds or transformative lurching monsters. Just…people. 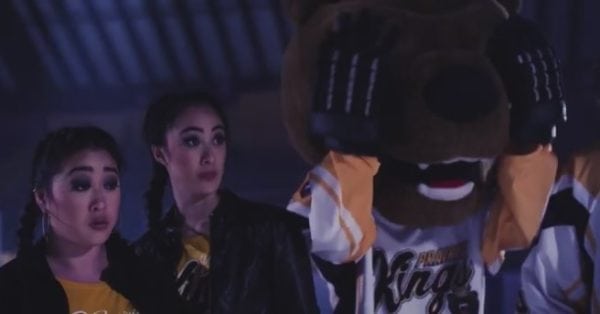 Even more inexcusable – an unforgivable sin, in my eyes – is Ahockalypse’s 99% devotion to CGI gore. Characters like “The Swede” (Mason Hendricks) are eaten alive, and when I say “eaten alive,” I mean two zombies pin “The Swede” down and gnaw at air well above body parts while red pixelated spurts explode like YouTube video special effects not even synched where bites occur. Rinse and repeat for some F-grade bloodletting, to the point where a female zombie with an eyeball dangling out her socket appears to have been zombified via not-even-approved-for-use SnapChat filter. There’s one SINGLE practical head-split (possibly one more rock-bash-in), and even that gets covered by digital ooze. Imagine something you’d see in a 90s arcade rail shooter like Area 51, but worse, and with way more cringe-worthy-bad Donald Trump jokes.

Oh, what. You didn’t think Ahockalypse would get political?! How could you miss such timeless opportunities as having a player named “Putin” and an opposing player named “Trump” stand back – arms flung over shoulders – while they watch a hockey brawl. “It’s like they organized it themselves,” screams an announcer. Biting commentary from the zombie flick more obsessed with naked dudes than actual zombies.

Worse still, Ahockalypse’s sense of humor is that of a concussed defender still trying to collect his punched-out teeth who suddenly sporadically recalls old movie quotes or repressed sexual fantasies. Johnson Jr. pauses his zombie apocalypse not once, but TWICE, to strip his players down into undies as if Walmart catalog mooseknuckle is actually important to Jonsey’s arc. Once as doomsday chrome-mouthed yokels Rob and Dean (unbearable dumbasses) force survivors to peel their clothes off just because, another time when the Cajun Club’s owner (I think?) forces Wave (Alex Galick) and DJ (Squall Charlson) to pole dance for him. Because that’s humor. Nothing to do with zombies, nothing gained from safety, not actual reason as far as plotting goes, but hey, you know what’s funny? ALMOST NAKED PEOPLE! In. A. Zombie. Movie.

Every aspect of Ahockalypse is twenty shades undercooked. Stunt coordination has actors pulling punches and camera angles completely wrong if clear misses were to be hidden, which makes Mascot Ninja’s kung-fu no saving grace (flanked by two Asian fans who know karate, of course). Actors sport zero chemistry and fumble through lines even they have trouble comprehending (lead Jesse Rennicke seems physically incapable of keeping a straight face). Midnight movie accentuations are either mindlessly overdrawn (DJ and Wave’s “It’s not gay if we kill each other!” argument) or moronic to the point of no comprehension (DJ starts ripping slapshots like sniper bullets that explode zombie’s heads). Johnson Jr. wants to make a frathouse movie about MILF and wang jokes, but apparently couldn’t sell it as anything but a horror comedy – that might explain why zombies are such an afterthought here.

Ahockalypse is a high school A/V club project wanting to be a direct-to-DVD Road Trip sequel being sold as a Z-grade zombie comedy. Expect nothing more than doofus hockey bros cracking try-hard sex puns and in-jokes to Wayne Harry Johnson Jr.’s other seminal indie classics Beware The Watchers or Ultro-Pep (you know!). Zombies as an afterthought, “midnight mentalities” of the lowest common denominator. As tantalizing a title and concept, there’s as much “horror” filmmaking here as there is in Stan Helsing. Once you introduce the pimp-type with a lisp whose only purpose is to perv out while characters striptease – and that’s LITERALLY his only scene – intentions are exposed. Not even a last-minute Barry Melrose cameo is worth this 80ish-minute penalty box imprisonment.