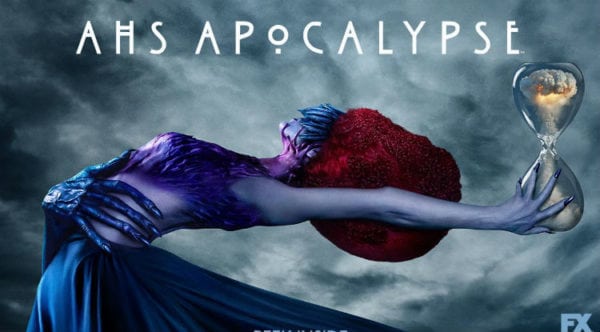 The titular apocalypse of American Horror Story is getting very biblical. With snakes appearing out of nowhere and a possible antichrist roaming around, the show took a very “Book of Revelations” route with this week’s episode. AHS: Apocalypse is only two episodes deep into the season, but this could be the strangest season ever. Don’t worry; it’s still the hilariously horrifying insanity fans have come to love.

The entire episode is posh and over-the-top, from the scares to the comedy. Everything is “played for the back row”; a term that means overacting. That isn’t a bad thing as every actor is talented enough to pull their punches just enough not to make it feel laughable. This style of television is rare these days, and it is a delight to watch. Take the dinner scene towards the beginning of the episode; there’s so much shade thrown around and dramatic face acting that Joan Collins might feel like she’s back on Dynasty. The exchanges between characters, especially involving the as mentioned earlier Collins and Leslie Grossman, are razor sharp. Dialogue moves at a fast pace when there are multiple characters, but when it’s just two, things slow down, and you can feel the campiness. That private moment that Langdon and Venable shared was well-acted, but both actors are dealing with some wild material. They handle complex dialogue and emotions while never losing that cheeky grin. Again, not a complaint but it’s a beauty to see such craftsmanship like this.

Speaking of Langdon, actor Cody Fern is starting to emerge as the breakout of the season. Fern plays the mysterious Langdon with such perfection, making a deliciously evil character that makes you crave more. You hang on every word he says, desperately needing to know what craziness will come from his mouth next. While The Countess and Dandy standout as iconic villains in the show’s history, Langdon’s Antichrist superstar might snatch the crown of the best villain. Though his intentions might turn out to be for good, something is terrifying behind the beautiful hair and striking eyes. Langdon’s interview scenes with both Evan Peter’s Mr. Gallant and Sarah Paulson’s Venable chilled me to the core after I recovered from his savage insults.

“No needs for rules anymore, chaos has won.” 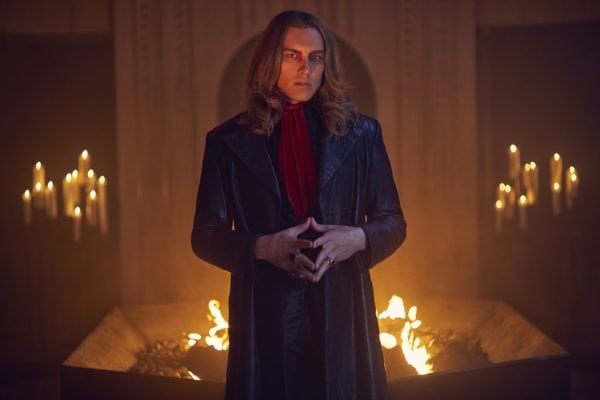 The other standout from this episode is the strong cinematography. Every season is a visual feast and Apocalypse isn’t slacking there. It does look vastly different from the ones before it, something that’s a refreshing change of pace. Maybe it’s the production design of the candle-lit bunker or the beautiful costumes, but I can’t take my eyes off the show. It isn’t just what is presented on-screen though; the camera work moves around this location so smoothly. The center framing draws your eyes into the scenes, even when it’s something you don’t want to see like strange leather sex scenes or someone getting whipped. Also, the way the filmmakers shoot the dialogue scene makes them feel unnerving. The closeness of the camera to the actors and the lens distorting things to make them feel more surreal like you are watching something intoxicated. Similarly to the overacting, strange camera work makes me appreciate the show than turn me off of it.

If ‘The Morning After’ lacked anything, it’s more answers to the questions presented. To use a puzzle analogy, all of the pieces are laid out on a table. Can’t make out the final product but the border is starting to take shape. That’s what this episode feels like; the outline is starting to make sense, but we are far from seeing the whole picture. That mystery is incredible, especially for horror fans that seem to pinpoint a formula almost instantly. More answers and a few Coven witches could help out immensely as a slow burn, and lack of fanservice seems to be the overall critiques of the season so far.

For this reviewer though, the only negative is the Adam and Eve of Outpost 3, Timothy and Emily. The actors, Kyle Allen & Ash Santos, are portraying the couple precisely as they need. Nothing against their ability as they are both excellent actors, but the characters, unfortunately, slow down the show. Plenty of times I would groan when the show cut away from a fantastic moment to this love story. The characters will undoubtedly play a more significant part in the whole story, my prediction is they will birth humanity’s savior, but as of right now, they take away rather than enhance. Their snooping around didn’t add more to the story, and the ending with them felt more like a set up for the shocking finale than a critical moment in their arc. 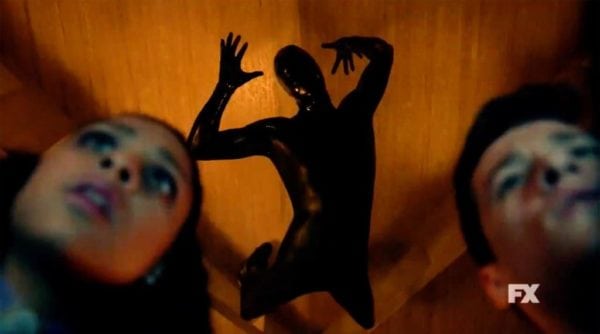 For years, creator Ryan Murphy has built a strange universe with each season of this anthology series. While each installment of the show is vastly different than the one before, they’ve slowly started to intertwine. Slowly but surely, the show stopped hiding the connections. Apocalypse feels like the accumulation of everything Murphy created in the show though. The final act of this twisted story, but is this it? Only time will tell, but as of right now, it feels like the end is indeed near. Though if this second episode is anything to by, this will be the best way to ride off into the sunset of this chapter.