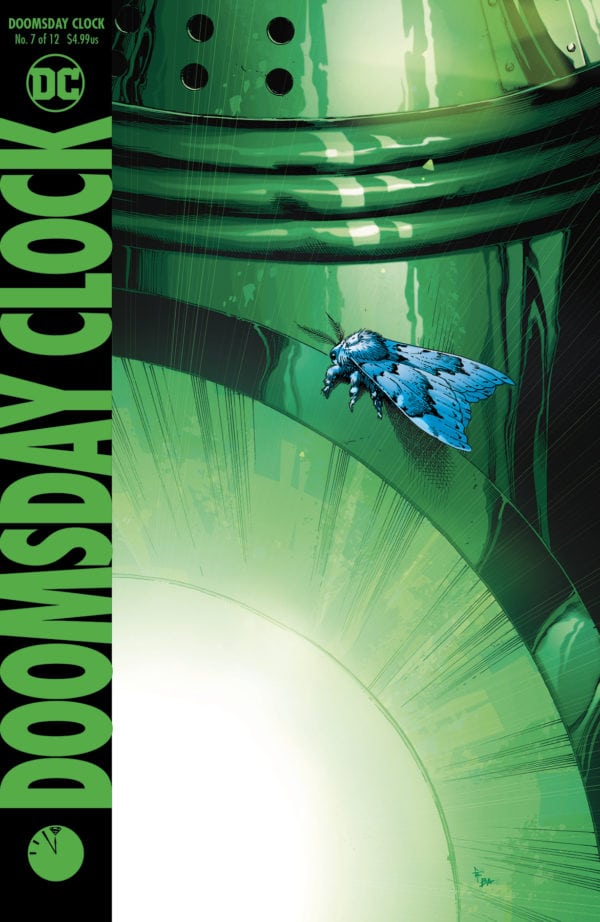 We are now over the halfway mark for Doomsday Clock and Geoff Johns certainly shook things up in the latest issue. Doomsday Clock #7 told an engrossing story that shuffled the board for the latter half of the series while giving several good character moments alongside some great artwork. It could have benefited from a little more focus on some DC characters, but the issue was still a great read that advanced the story in some pretty interesting ways.

Where Doomsday Clock #7 succeeded in the most was in Johns’ writing of Doctor Manhattan. His arrival has been a long time coming, both within this specific story and the DC Universe ever since Johns revealed Manhattan was behind the changes in DC’s continuity and history. Manhattan may not have been shown too much, but his prresence, whether physically or through narration, added some exciting elements to the story. Right from the opening page, Manhattan’s voice was on point as his narration bounced back and forth between time periods in a way that captured the same spirit of Manhattan’s origin chapter in Watchmen. What is also intriguing about his appearance here is he mostly seems like the same Manhattan seen at the end of Watchmen rather than some villainous figure we’ve come to expect given his actions throughout DC Rebirth. It shows there’s a lot more going on with Manhattan than simple villainy, though how exactly he became so disillusioned with his newfound enlightenment will be interesting to see.

Though the focus was on Manhattan and Ozymandias, the issue still had a fair amount of balance as everyone got little moments to shine. It marked the first time the large cast of
Watchmen characters were together on a single page since the start of the series, but Johns was able to juggle them together well with moments that were comedic, serious and moved the story along. Rorschach had a particularly emotional moment as his worldview came crashing down yet again thanks to – once again – Ozymandias’ manipulations. It just served to show how cold and calculating Ozymandias still can be while highlighting the tragedy of Reggie’s character, yet moving him forward to be more than just a copy-cat of Rorschach. Mime and Marionette, meanwhile, got one piece of exciting news and a tantalizing hint on the future of their child that raises the question of how they might play into the latter half of Doomsday Clock. The only one of the Watchmen group who was sidelined was The Comedian, but even then he had a couple funny lines as he watched everything from his chair.

However, characters from the DC Universe got the short end of the stick. Batman was once again relegated to more of a supporting role with only a few lines and a brief fight with Marionette and Mime. The same thing happened with The Joker where he had a similar role to Comedian by being on the sidelines and only offering quips. Granted, the trade off to Batman and Joker’s reduced roles was the strong focus on Manhattan and Ozymandias, but they were maybe left a little too much to the side. The same can be said of Superman, who is supposed to be one of the main focal points of Doomsday Clock yet has hardly appeared. The tease at the end, however, of Superman and Manhattan’s conflict points to this changing in the coming issues.

It is no surprise that Gary Frank’s artwork is great throughout the issue. He gives the characters a nice range of emotions and body language, from the way Ozymandias resigns himself to confess or Joker’s mad delight at being beat up by Rorschach. Frank really succeeds though in replicating the feel of Dave Gibbons’ work in Watchmen through the look and feel of the artwork. Whether its the classic nine-panel grid or the transitions as Manhattan teleports the group around the world, Doomsday Clock #7 feels like a natural successor to Watchmen through the gorgeous artwork. Brad Anderson’s colours compliment Frank’s pencils by making the visuals pop off the page. Frank and Anderson’s collaboration has been one of the best selling points of the series thus far.

Doomsday Clock #7 reinforces the notion that the series is more of a sequel to Watchmen than it is a crossover between it and the DC universe. While heroes like Batman and Superman should appear more, Johns writes the Watchmen characters very well in a away that helps it feel like a continuation of the original material. That last fact is again helped by how much Frank and Anderson contribute to making it feel like a natural extension of Watchmen through their great artwork. Now that we’re this far into the series, all the various pieces and stories of Doomsday Clock seem to be coming together in some very intriguing ways that will surely generate some excitement in its fans.