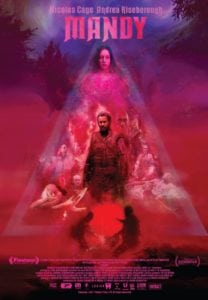 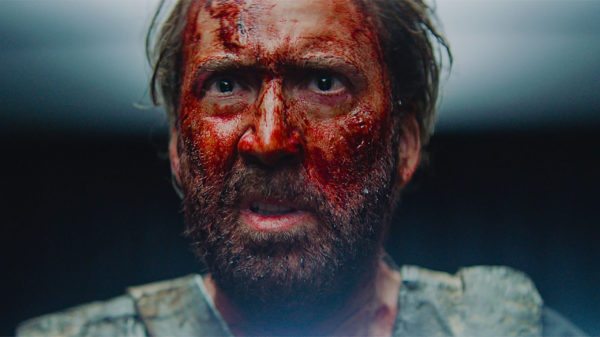 Mandy assuredly contains a number of moments to add to the somewhat career-defining (at least, as far as the latter half of his acting tenure goes) sensational video of Nicolas Cage losing his shit, but the difference between 90% of the movies in that compilation and this is that the freakouts and explosive rage carry an undercurrent of sympathy.

Admittedly, Mandy is a bare-bones narrative essentially boiling down to revenge against a group of evangelical cultists and their summoned demonic biker gang associates, but writer and director Panos Cosmatos (alongside co-writer Aaron Stewart Ahn) imbues standard practices with heavy stylistic choices ranging from art-house horror sensibilities conjuring up the vibe of the set of an ’80s heavy metal music video, death sequences involving gallons upon gallons of fake blood and most certainly enough to make anyone that ever worked on The Evil Dead series smile with approval, scenery-chewing performances from everyone, especially the villains, comprised of lines that feel ripped out of the dark fantasy novels the titular Mandy reads or perhaps heavy metal reminiscent lyrics, and hypnotic visual trickery, specifically speaking a back-and-forth transformative image that had me questioning if I was going crazy and seeing things.

Genre pictures typically don’t generate much traction as far as awards consideration goes, but without hesitation, I can confidently say that Mandy will go down as one of the most visually arresting films of the year. A debate can be had if some aesthetic aspects go overboard, slightly robbing the experience of some emotional heft, but the psychedelic shot compositions successfully capture a mood that switches between beautiful and unsettlingly eerie. Smoke filters are used to great effect making audiences feel as if they have been placed in a literal hell (which also works in conjunction from the mental standpoint of Nicolas Cage’s vengeance-seeking Red), costume designs are completely practical without a hint of CGI, and environments are peaceful with colorful backgrounds. Often, the film plays with lighting, but important to note is it’s not just for hollow stylization. And once again, one image literally had me thinking I was becoming crazy.

It’s not just technical filmmaking that causes Mandy to stand out as a bold, uncompromising cinematic statement, but also the tale of two halves approach to the story. A good 45 minutes of the film is peaceful; Red and Mandy (played by Andrea Riseborough with mystique and gothic grace) have extended conversations that might feel as if they are going on a bit too long in the moment, but add to the payoff of unrelenting bloodsoaked carnage. We learn that Red is a lumberjack and Mandy is an artist, specializing in paintings just as ethereal as the rest of the film’s visuals. Not to spoil anything, but when bad things do happen from the hands of religious fanatics, the film has done its job to ensure that when Nicolas Cage is having a breakdown in his own bathroom while chugging alcohol and tending to multiple wounds, all while screaming up a storm only like he can, it’s a genuinely strong acting showcase that gets viewers on board and engaged with the upcoming payback.

Attention also needs to be drawn to the fact that this will be the last soundtrack for the recently deceased, gone too soon, outstanding composer Jóhann Jóhannsson, who is on top form here whether it’s quiet beats or upping the tempo.

With that said, the portion most people will be purchasing a ticket for does deliver, and with a nice variety of weapons that include a mythical looking battle ax and chainsaws. It’s not long before blood is smeared dry all over Red’s face, with every kill further sending him into a warped killing machine growing increasingly unstable, and it’s all done with the expressionistic body language that instantly clicks with Cage. To be fair, there are also moments of restraint displaying emotional pain, and they add more weight to the outbursts of violence. For once, the actor is both an unhinged lunatic yet strikingly human. As the bodies pile up and the gore becomes more stomach-churning, I reached a point where I had a declaration to make; Nicolas Cage is my new God.