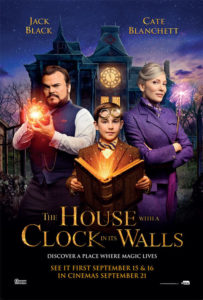 Give Eli Roth credit for pulling a 180 with his filmmaking career. It’s also clear what might have attracted the gross-out horror maestro (responsible for the nastiness of the Hostel franchise, Keanu Reeves channeling his inner Nicolas Cage in the outrageously campy fun Knock Knock, and most recently remaking Death Wish at the worst time culturally) to this family-friendly fantasy prospect. Based on a book by John Bellairs (adapted for the screen by Supernatural writer Eric Kripke), The House with a Clock in its Walls has a late game transition into something slightly more sinister with the potential to frighten some younger viewers, going as far to depict scenes of Kyle MacLachlan’s (how great is it to see the Twin Peaks star back on the big screen!) evil wizard villain openly bragging about murder, flashback expositions touching upon the bleak nature of World War II, blood sacrifices, and more. Of course, all of this is contrasted with scenes of fighting jack-o’-lanterns and Jack Black comfortable in one of his typical goofy roles.

Playing a magical warlock, Jack Black’s Jonathan comes into custody of young Lewis (Owen Vaccaro of the Daddy’s Home series getting a shot here at what is essentially a leading role meant to express to other kids the benefits of being weird, different, and standing out from the rest of the pack) following the offscreen but very much so tragic death of his parents in a car accident. Immediately following the opening title card a graphic tells the audience that the location is somewhere in Michigan set in 1955, but Eli Roth wastes no time taking the proceedings to the titular house which feels anything but the established time period. What’s here is reminiscent of Beauty and the Beast, as household objects ranging from chairs to ever-changing expressive stainless steel glass pictures all seem sentient. However, they don’t talk and also have far less personality, with the latter being difficult to forgive in a movie where, theoretically, the house should be just as much a defined character as the protagonists. The production design is also filled with medieval statues, mystical designs, and Jack Black rocking a kimono out in public if that wasn’t enough to inject in some identity. Nevertheless, none of it is necessarily visually striking and lacks personality. 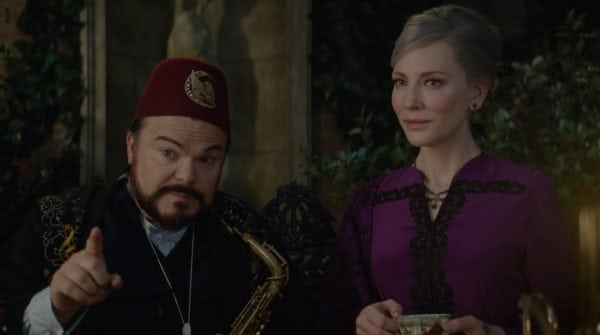 There is also an emerald-colored griffin that has the tendency to shit large chunks all over the place, sometimes on characters. “Use your litter box” Jonathan fires back, desperately trying to mine some humor from what is transpiring, but it’s all for naught. Outside of that attempt at comedy and the aforementioned awkward tonal inconsistencies that plague the third act, The House with a Clock in its Walls feels like it’s flinging that same shit at the walls searching for inspired whimsical fun. Jack Black obviously is able to elicit this somewhat, but much of what is here is also random and without reason.

Anyway, speaking of searching for things, Jonathan and his nephew Lewis, together with the help of friendly which companion Mrs. Zimmerman played by a wonderful Cate Blanchett (she’s the only actor in the film that can make the more serious-minded narrative elements work and register with a degree of emotion), are tasked with finding a mysterious clock that only ticks during the middle of the night and is clearly hidden away so secretive that all the self-help magic tutorial books in the world are unable to illuminate any clues. The nightly noise is maddening to the point where Jonathan plays musical instruments at 3 AM to occupy himself even if it means keeping up the next-door neighbor, but its existence is also one created with malicious intentions necessitating the need to investigate and locate the device.

For all the fantasy on display, Lewis is also wisely shown at school trying to make friends despite his idiosyncratic qualities (he is insistent on wearing a pair of goggles that don’t exactly help make the other kids warm up to him any more than living in a supposed haunted house notorious for an infamous death) and does get somewhere with an injured classmate named Tarby (Sunny Suljic having a breakout year in both video games and movies this year with God of War and Mid90s respectively) running for class president. However, his seeming unwillingness desire to show off his magic around those that mock him makes no sense. No one has told him not to do any of it in public, and even if someone did offscreen it’s highly unlikely a child would have the restraint to hold back, especially when facing bullying over his magic not being real. Still, the subplot does allow the film to insert some standard “be yourself” messages.

This isn’t meant to be a knock on the outstanding actors, but it’s kind of disappointing when the best aspect of a fantasy mystery is the work from Jack Black and Cate Blanchett. As close as they are, they also enjoy insulting each other nonstop in jest, making up for the majority of the film’s entertainment value. Admittedly, there is a clever twist towards the end, but the overall narrative feels undercooked with a lame villain only saved by the presence of Kyle MacLachlan and some decent CGI (it’s clear most of the budget here was squarely applied to his character as the rest of it is ghastly, especially when bright colors are placed over daytime settings). With that said, it’s also hard to not revel in a few of the bizarre creative directions and the fact that Eli Roth has made a kids movie. And did I mention Jack Black and Cate Blanchett throwing out zingers at one another constantly, because where else are you going to see something that grand? In a movie about magic, for better or worse, that’s actually the most fantastical part.