If you’re a fan of Games Workshop’s Warhammer Fantasy universe then you’ll be pleased to hear that Warhammer Age of Sigmar: Realm War is now available on iOS 12 using Apple’s new ARKit2 software.  The Age of Sigmar comes to life with stunning 3D graphics and intense, dramatic battles. 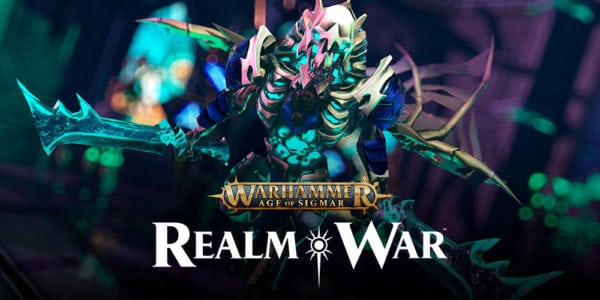 In Warhammer Age of Sigmar: Realm War players will be able to collect and build their own unique warband decks of breathtakingly detailed characters and take part in real-time battles against opponents.  Thanks to the ARKit2 software, Realm War will allow players to bring the battles into the real world and share battles with the use of augmented reality.

“Having been at the forefront of mobile gaming technology on Warhammer 40,000: Freeblade, we’ve relished the opportunity to push the boundaries once more with Age of Sigmar: Realm War to take AR to a new level on mobile,” said Andy Wafer, CEO of Pixel Toys “the ability to not only interact with the intricately detailed and unique Warhammer characters in the real world as well as AR battle friends in real time in the same location and then analyse your tactics via AR replay giving you the edge for your next battle. We really feel we are bringing something new and exciting to the mobile gaming space.”

Not only can battles be shared with friends, players are also able to send  full AR versions of characters they have collected in game to their friends who can then place the character into the real world on their device.