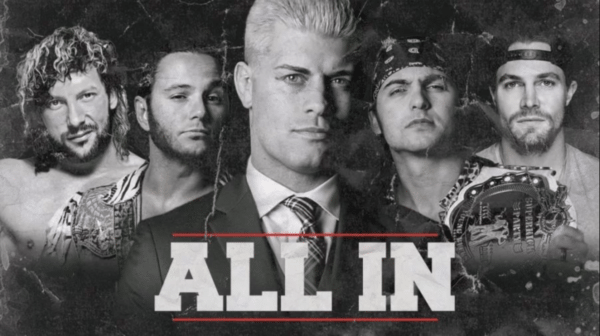 The new era of wrestling is officially upon us! With the first ALL IN now in the books, everything will be different. But it’s just not about the myth of ALL IN as the event itself is something you need to see.

1. The Briscoe Brothers (Jay Briscoe and Mark Briscoe) vs. SoCal Uncensored (Frankie Kazarian and Scorpio Sky)
– Starting off the historic event, a tag match between ROH teams The Briscoe Brothers and SoCal Uncensored took place. The action was quick-paced, but neither team rushed for pinfalls. While this wasn’t the hottest match on the planet, the team got the crowd hot enough with the tag team combinations and near falls near the end. SoCal Uncensored felt like the underdogs going in, and they proved many wrong by stealing a win from The Briscoes. Is this the last we will see of SCU or will the team return to help their leader Christopher Daniels as he faces The CW’s, Stephen Amell?
★ ★ ★

2. Over Budget Battle Royale
– This match, while entertaining, was the definition of a clusterfuck. So much happened that it’s hard for the commentator to keep up with the action in this match. When the ring started to clear some of the competitors, it began to become clear who were the favorites to win. About halfway through the battle royale, we got a fantastic spot with The Hurricane delivering a chokeslam to the much bigger Brian Cage and Punishment Martinez. Shortly after, hardcore legend Tommy Dreamer brings some weapons into this match, an homage to his ECW days. The final four left in the ring were Bully Ray, Brian Cage, Colt Cabana, and Jordynne Grace. Grace quickly eliminated the much larger Brian Cage, and Bully Ray made quick work of her. The final two were in-ring legends Bully Ray and Colt Cabana with Bully Ray making the final elimination. Or so he thought. Flip Gordon shocked the world and showed he was hiding the entire match so he can make the elimination. Now, Flip is finally booked!
★ ★ 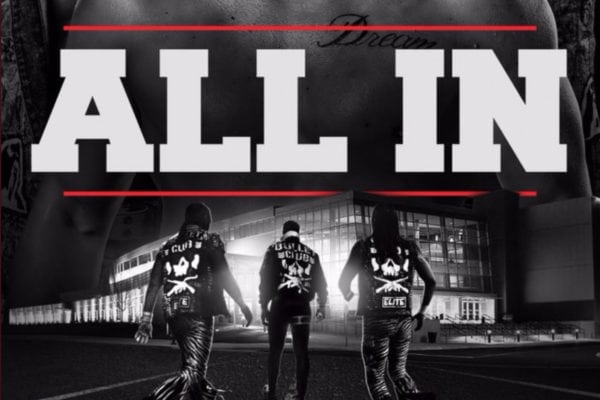 3. MJF vs. Matt Cross
– A surprise match between MJF and Matt Cross kicked off the event. Matt Cross, better known as Son of Havoc in Lucha Underground, showed off his high-flying style quickly in the match, but MJF promptly grounded the veteran. The action was fairly back-and-forth, with MJF gaining a small advantage mid-match. Things quickly changed when Matt Cross finally picked up the pace and started to fly around. To close the match, Matt Cross hit a fantastic Shooting Star Press and sealed his win.
★ ★½

4. Christopher Daniels vs. Stephen Amell
– Star of The CW’s Arrow Stephen Amell walked into this match undefeated, and he tried everything to keep it that way. This heated contest between rivals was going to be brutal, and both men didn’t hold anything back. While it wasn’t a 5-star classic by any means, it was surprising to see a non-wrestler hold his own against a wrestling icon like Christopher Daniels. Stephen Amell impressed with a massive dropkick from across the ring and a bump through a table at ringside. That wasn’t enough to stop Christopher Daniels as he went in with powerful moves and his “Best Damn Moonsault” to grab his win. It didn’t end with the villainous Daniels furthering his feud with Amell, but extending his hand as a sign of respect. This match turned out to be a pleasant surprise as both men put their best foot forward.
★ ★ ★ 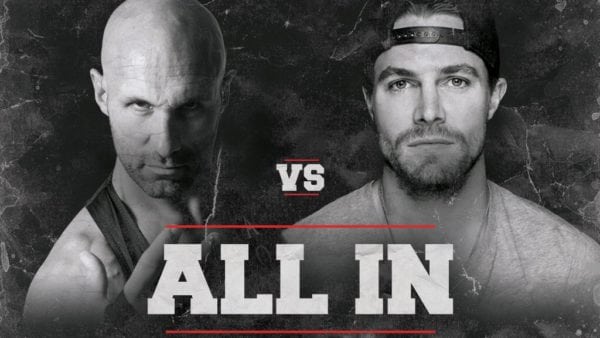 5. Madison Rayne vs. Britt Baker vs. Chelsea Green vs. Tessa Blanchard
– Four of the best women in the world faced off, and boy, this was a stronger match than originally expected. Not that I doubted the ability of the women, but they seemed lost among this insanely strong card. But I am glad they proved me wrong with an entertaining match that never lost steam along the way. The highlights of this match were Tessa Blanchard drilling each of the women with a nasty elbow and her amazing move “Magnum.” The MVP was Chelsea Green as she carried the match with her crazy gimmick and high-impact moves. Blanchard powered through them though and picked up the win, though the finish fell a little flat with a small botch during the pin.
★ ★ ★½

6. Cody Rhodes vs. Nick Aldis (NWA World Heavyweight Title Match)
– You can feel the electricity in the Sears Centre when this match got underway. Cody Rhodes and Nick Aldis are two of the biggest names in the industry, and this had a “big match feel” to it. The match got off to a strong start with both men starting off at top speed and holding nothing back. Aldis was the favorite going into the match, but Cody was feeding off the crowd early on. Things went to a screeching halt when Cody was surprisingly “injured,” and the ref Earl Hebner threw up the “X,” calling for the match to be over. Things thankfully didn’t stop there, and the contest got back underway after some small hijinx. A bloodied Cody fought hard to combat the much bigger Nick Aldis, and it seemed all hope was lost. Even after his wife Brandi Rhodes tried to take an elbow drop for him, Cody couldn’t capitalize, but things changed when he finally hit his finisher. That didn’t put Aldis away, but it helped weaken him so Cody could steal the win and the NWA World Heavyweight Title. His father Dusty would be very proud.
★ ★ ★½ 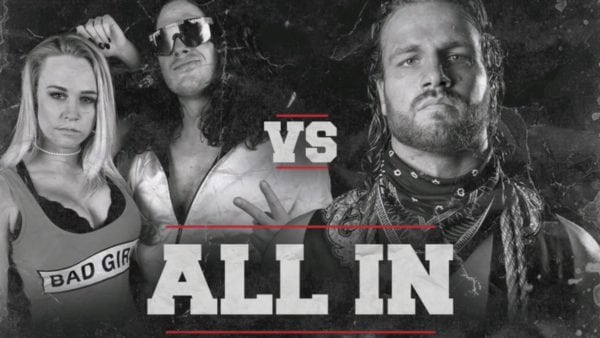 7. Joey Janela vs. Hangman Adam Page (Chicago Street Fight)
– If you crave a brutal and insane match, Janela v Page is something you will enjoy. Both men are known for stunts and shenanigans, something this match had in excess. The highlight of this match was Hangman hitting Joey Janela with a crazy Burning Hammer-type move through a ladder! That move made me hold my breath as it was far more brutal than expected. Though this match wasn’t as polished, due to the hardcore nature, it was still entertaining. The post-match angle outshined the match itself with a returning Joey Ryan facing off against his “murderer” Hangman Adam Page. It even included a parody of The Undertaker with Penis druids coming out to take away Hangman to the penial afterlife! A solid hardcore and comedy match.
★ ★½

8. Flip Gordon vs. Jay Lethal (ROH World Title)
– While Jay Lethal is the current ROH World Heavyweight champion, it was “Black Machismo” that fought at ALL IN. This match showed how amazingly diverse the card for the show truly is; this had a little comedy, stellar wrestling, and some genius storytelling throughout. With Flip’s story being the fact he just wanted to wrestle at this super show, it felt fitting for him to have such a memorable match. He proved Cody wrong by getting himself booked and holding his own against the ROH champion, but it wasn’t enough to hold off Jay Lethal and his Macho Man persona. Lethal retained, but it was Flip’s win. This could be the most well-rounded match of the evening.
★ ★ ★ ★

9. Kenny Omega vs. Penta El Zero
– The hype for this match can’t be summed up. Kenny Omega is the hottest name in wrestling, and Penta el Zero is a brutal madman unlike any other, but the “holy shit” chant before the match began is a good way to describe the aura of this dream match. From the beginning, this was an amazing showcase of why wrestling is at its best in 2018. The only way I could describe this match is like a visual version of two men’s “Greatest Hits” album; just every amazing move and spot they have in their arsenal. There’s so much to take in with Kenny Omega taking a beating from Penta El Zero for most of the match, but making an amazing comeback mid-match. There was little doubt that the IWGP Heavyweight champion would lose this contest, though it did get a little close near the end. The package piledriver from Penta to Kenny is a sick move and could’ve ended the match and Kenny’s career! Omega overcame the odds and got the win, but he will be feeling this match for a long time.
★ ★ ★ ★ ½ 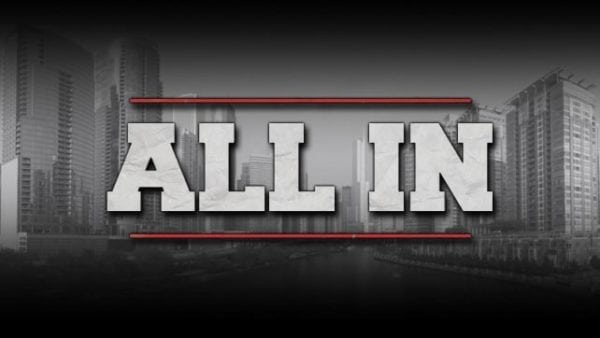 10. Marty Scurll vs. Kazuchika Okada
– Going into this match, Marty Scurll was told he would never beat Okada. He’s nothing but a “Junior Heavyweight,” and Okada is too big of a deal to overcome. Scurll didn’t let the naysayers hold him down as he took it the former IWGP Heavyweight champion with everything. Was it enough to win? No, as Kazuchika Okada let loose with some nasty clotheslines and his typical nasty style. But the story of this match was getting Marty Scurll over as a real competitor. They succeeded as even in defeat, Scurll looked like an absolute megastar. Somehow, this match was just as good as Kenny/Penta match.
★ ★ ★ ★ ½

11. Rey Mysterio, Fénix, and Bandido vs. The Golden Elite (Matt Jackson, Nick Jackson, and Kota Ibushi)
– Talk about quick-paced. While the time was running out for the show, they only added to the pace of this high-flying spectacle. There wasn’t a wasted moment as all six of these men went out to wow the crowd and steal the show! It’s hard to call out the best of this match as everything felt like a highlight reel moment. If there was one single match to watch from ALL IN, this is most definitely the one. It felt a little rushed near the end but that a small complaint in an otherwise excellent match! The Golden Elite won the match with a Meltzer Driver, something fitting for such an iconic wrestling night.

ALL IN is probably one of the most modern wrestling shows I’ve ever seen. From start to finish, the crowd was hot, and the matches were even hotter! This show is a must-see for any wrestling fan with something for every type of fan. The final three bouts on the card really sealed the deal for this being such an amazing night of professional wrestling. If I had to pick one match to see, check out the main event triple tag match as it shows why ALL IN will be talked about for years to come.