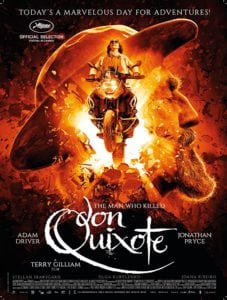 Toby, a disillusioned advertising executive, becomes pulled into a world of time jumping fantasy when a Spanish cobbler believes him to be Sancho Panza. He gradually becomes unable to tell dreams from reality. 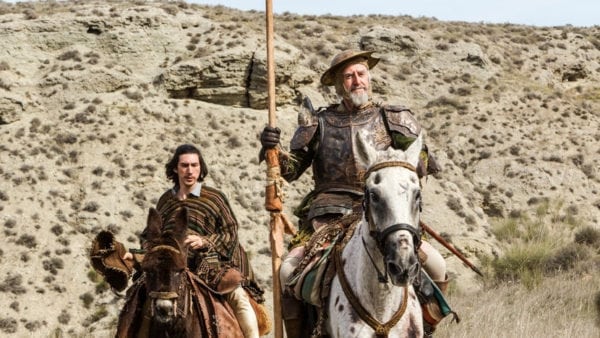 Terry Gilliam’s legendary, two-decades-in-the-making epic has finally been completed, and while it stings a little that one can’t lavish more effusive praise on the end product, it’s at least nice to be in a world where this film actually exists. For everyone who complains that The Man Who Killed Don Quixote doesn’t make a lick of sense, there will surely be someone who asks – does it have to?

Shirking a straight adaptation of Miguel de Cervantes’ classic novel in favour of a far more ambitious – and yes, sloppier – effort, Gilliam introduces us to hotshot filmmaker Toby (Adam Driver), who returns to the Spanish region he shot a Don Quixote short film a decade prior, where he’s reunited with the cobbler he cast in the title role (Jonathan Pryce). The man, stuck in a delusional fantasy of actually being Quixote, mistakes Toby for his sidekick Sancho Panza, and together the two set off on a non-linear adventure in which the line of reality becomes increasingly blurred.

This film is, clearly, meta as hell, both with regard to the source material and, indeed, the nature of filmmaking itself. Toby at one point even swipes Spanish subtitles off the screen, switches to English and tells “Quixote”, “We don’t need that.” Later on, two characters seemingly discuss the scarce coherence of the movie itself; “Try to keep up with the plot?” / “There’s a plot?”

It’ll be obvious to anyone with even a passing knowledge of the film’s tumultuous production – producing a brilliant 2002 documentary in its own right, Lost in La Mancha – that many of Gilliam’s own frustrations with his profession are confessed here, giving the film a giddily self-reflexive tone that encapsulates its hellish creation.

Unfortunately this doesn’t translate enough into clever, tonally balanced entertainment, and too often Gilliam relies on overt goofiness that’s often a little on the wince-inducing side, especially in a film that clocks in at a meaty 132 minutes. The first act coasts on enough goodwill for the enterprise as it sets up the madcap premise, but after that things start to get a little tough and trying. After a point, it’s just boisterous and silly without being smart or even basically engaging. 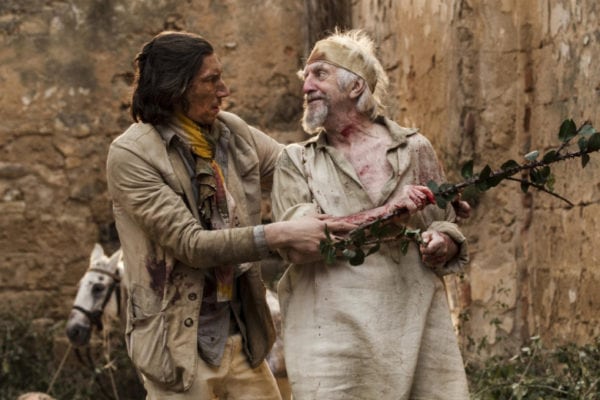 What keeps the film somewhat afloat, however, is the fine performances from Driver and Pryce. Driver is hilariously exasperated, dropping an angry F-bomb with the best of them, and on regular occasion no less.

It’s ultimately Pryce’s show, though, embodying Quixote one way or another with a kooky, world-worn spirit that’s highly entertaining both as a meta-character and a straight Quixote rendition. The likes of Stellan Skarsgård and Olga Kurylenko round out the supporting cast nicely enough, though along with the lesser-known Joana Ribeiro – who plays Toby’s maybe-love interest – they don’t really get enough interesting to do.

In addition to the solid acting, it’s also an intermittently ravishing film, if clearly at the mercy of a tight budget, reined in considerably from its earlier, higher price tags. The stunning locations give the film a remarkable natural beauty captured with evocative aplomb by Gilliam’s regular DP Nicola Pecorini, though some occasionally vile visual effects do spoil the fun sometimes. Whether the visuals always work or not, though, they’re usually accompanied by fine musical compositions from Roque Baños, lending a classically melodramatic sweep to the dusty vistas.

Would a straight telling of Don Quixote probably have been more effective? To a point, certainly. And could the female characters have more agency, to say nothing of a few questionable jokes about Muslims? Sure. But could the end product ever live up to 20 years of hype? Probably not. This is an intriguing and ambitious film though hamstrung considerably by its free-wheeling tendencies which quickly turn sloppy and offputtingly daft.