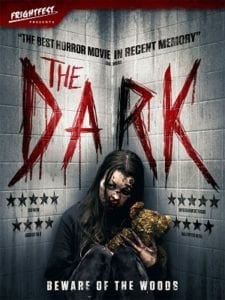 An undead girl and an abused blind boy hiding in the woods form an unlikely relationship.

The influence of Let the Right One In has been reaching far and wide in mainstream horror over the past decade, gently moving the genre away from the forced multiplex-pleasing jump scares of big hitters such as The Conjuring and its increasing number of spin-offs – which still rightfully have their place – towards a more cerebral, fairy tale style of storytelling. The Dark is an English language Austrian production that taps into the European tradition of folklore and twisted childhood fears in a very similar way to Let the Right One In but with a few changes that give it a very different feel, despite obviously coming from the same place stylistically.

On the run from the police, Josef Hofer (Karl Markovics) is looking for a wooded area known as Devil’s Den. He finds it after killing the local shopkeeper but as he arrives there he is attacked by what appears to be a feral teenage girl (Nadia Alexander). The girl, named Mina, is heavily scarred with an ashen complexion and has been missing from her home for some time, haunting the woods and living off the land or anybody who wanders into her territory. After killing Josef Mina discovers Alex (Toby Nichols) in the boot of his car and, noticing that he is blind (or, more likely, has been deliberately blinded) and has obviously been suffering abuse at the hands of Josef, lets him live, with the two teenagers forging a relationship based on their experiences of abuse, although it becomes clear that Alex still has a home to go to and a family that miss him, which makes Mina even more protective of him as she begins to rediscover her own humanity.

A slow-burner in every sense of the word, The Dark is one of those horror movies that is very hard to recommend based on its premise or the fact that it is a horror movie because a) there is a lot more to it than being ‘just’ a horror movie and b) it is one of the most downbeat movies you are likely to see, but at the same time it is a fairly rewarding one if you are prepared to stick with it. It does feel a lot longer than its 95-minute running time and there is very little dialogue or detail given to give you a full picture of the circumstances that lead to Mina and Alex meeting in the woods; we get enough to know that Josef held Alex captive and forced the boy to obey his ‘rules’ (that we never really know but Alex does allude to them several times), and we also learn that Mina was sexually abused by her alcoholic mother’s boyfriend who then tried to kill her by bashing her head in with a heavy ornament, but other details are sketchy. Mina was left for dead and then buried, although she rose out of her grave and continued to live in the woods, her wounds never healing and her bloodlust insatiable, but is she a zombie? Is she a vampire? Or is she something else, borne out of vengeance or the stripping of her humanity? Ultimately, it doesn’t matter as when she meets Alex she starts to rediscover her own sense of being, all the while the troubled boy starting to lose his as his dependency on Josef and whatever punishment he dished out starts to wane and he is forced to rely on Mina and her wild existence for survival.

As with Let the Right One In, The Dark is not a feel good horror movie to put on when your mates come round with the beer and pizza as it is very slow, loaded with metaphors about human nature and how friendships are made, and the gruesome bits are few and far between. However, despite the need for an editor to tighten it all up The Dark does relay an intelligence that isn’t seen – or is allowed to be seen – often enough in genre movies and for a debut feature it shows a great amount of maturity and technical ability from its creators that will hopefully get the chance to flourish on future projects.