Set in Ireland during the Great Famine, the drama follows an Irish Ranger who has been fighting for the British Army abroad, as he abandons his post to reunite with his family. Despite experiencing the horrors of war, he is shocked by the famine’s destruction of his homeland and the brutalization of his people and his family. 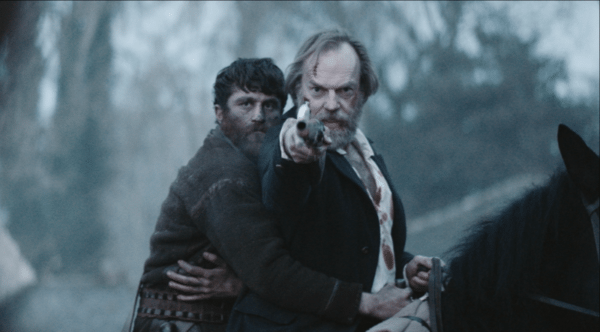 Black ’47 could be described as a revenge thriller or a famine-era drama. But I think the genre that best defines this movie is Irish Western.

Set in 1847, during the Irish famine, Black ’47 tells the story of Feeney (James Frecheville) as he hunts down those responsible for the death of his family. Meanwhile, Hannah (Hugo Weaving) a disgraced British enforcer, is given the opportunity to redeem himself by hunting down Feeney. It’s a cat and mouse game, not unlike those seen in westerns such as Butch Cassidy and the Sundance Kid, though with a far darker tone.

Both Weaving and Frecheville embody prototypical western characters. They both speak infrequently, express a grand total of three emotions (moody, angry, and more angry), and prefer to do things their own way. It’s nothing original, but the performances are good, though Weaving deserves more screen time than he gets. There is also a strong western influence in the cinematography. There are plenty of long shots to establish the barren scenery, and though there aren’t any Leone-esque super-close-ups, there are plenty of staredowns and faceoffs. Unfortunately, though the sight of famine-era Ireland is bleak, it doesn’t have the magnificence of the old west, making the overall aesthetic of the film a little flat.

The geography of Ireland also diminishes the tension in the cat and mouse game. In Butch Cassidy, the duo are stalked across mountains, lakes, and even country boarders. But in Black ’47, no one is ever that far away from anyone else. The country is just too small, and it makes the whole thing far less epic.

Conversely, the setting does lend itself nicely to the music. The electric guitar of Spaghetti Western music is replaced by whistles, though the chord progression of the music remains similar, if not the same. This gives the film a truly Irish flavour, and bolsters its unique angle on the genre.

Like any western worth its salt, Black ’47 has its fair share of action sequences. These sequences do a better job building tension than they do paying off, but overall are pretty exciting. The sound mixing occasionally feels flat, taking the edge off some the violence’s impact, but the choreography often makes up for it.

On the whole, Black ’47 is a middling affair. Fans of westerns will find plenty to enjoy, but nothing that will amaze, and those less interested in the genre probably won’t get much out of it at all. It’s a competent film, and certainly enjoyable, but it fails to be either harrowing or epic.