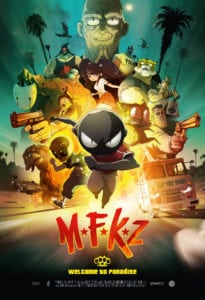 When strange superpowers begin to erupt out of him, Angelino discovers that he’s not as normal as he thought he was and that the mean streets of his hometown might not be the greatest threat he faces.

Towards the beginning of the new comic book adaptation MFKZ, the protagonist reveals via voiceover that he lives in a place called Dark Meat City, only to tell the audience that his take on that acronym is “Depression. Murder. Crazy-Ass Motherfuckers”. It’s a statement of intent for a movie that is determined to throw absolutely everything at the wall in the hope that some of its madness sticks. There are skull-headed fire creatures, tentacled beasts, a conspiracy to engineer climate change and a gang of ancient luchadores who follow swarms of cockroaches in lieu of any of them opening Google Maps.

At the centre of it all is Angelino, who is seemingly oblivious to the fact he is a strange, black alien thing and not a normal human. His friends, in similarly bizarre fashion, are a talking hamster thing and a skull-headed lad who’s always on fire. Nothing in this universe makes sense, but that’s enough to make it chaotically charming in the early stages, as Angelino becomes aware that he can see mutated tentacle beasts in the shadows of some people. It’s like he lives in a Gorillaz video with hints of Grand Theft Auto and has found the glasses from They Live.

Soon, the tentacle beasts are on his tail and it turns out that there’s something in his backstory that makes him simultaneously interesting and threatening towards them. It would be grandiose to describe what follows as a plot because there’s so much of it, but none of it is in any way connected. It would take an entire website to explain the rest of the story, which presumably seeks to adapt every frame of the original comic book, rather than saving any of it for a potential sequel in the name of coherence.

With that said, MFKZ has enough madcap style to paper over many of its storytelling cracks. The fizz, silliness and blood-soaked energy of the movie’s aesthetic, peppered with self-referential title cards and voiceover (“the movies have never been this insane”) is as funny as it is slightly irritating. It works well when there’s some sense of focus in the first half, but flounders entirely once the utterly preposterous mechanics of the overstuffed plot kick in.

It often feels like MFKZ was written by someone who became caught up in how much they loved the source material. There are entire subplots – sorry weird luchador guys – that serve so little purpose that they ought to have been excised and the constant movie homages become wearying very quickly, while every woman is tossed uncaringly to one side.

There’s undoubtedly a sense of adrenaline-fuelled craziness at the centre of this movie and there are moments in which it absolutely works. However, directing duo Shōjirō Nishimi and Guillaume “Run” Renard attempt to spin far too many plates and this ultimately impedes any sense of coherent narrative the movie was trying to convey. The visuals are eye-catching and the action enjoyably nasty, but there’s absolutely nothing of substance behind it all.