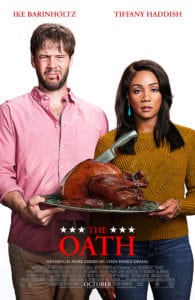 In a politically divided America, a man struggles to make it through the Thanksgiving holiday without destroying his family. 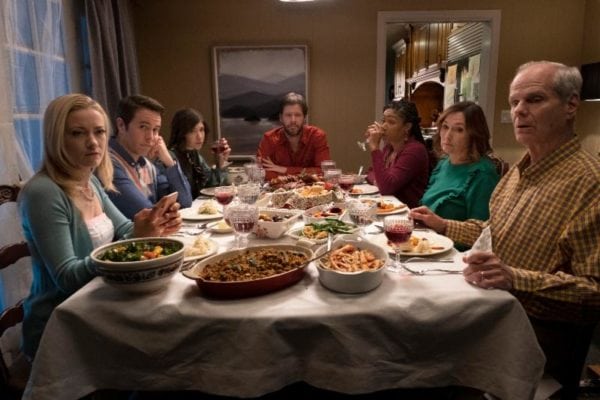 What’s your thought process and/or reaction when a respected family member/friend begrudgingly makes a political choice for their own best interests, even if it is something that detests you? I don’t know how The Oath (the debut writing and directorial effort from comedian and notable supporting funnyman Ike Barinholtz) is being marketed elsewhere, but it’s more in-depth than the Facebook ad polluting my feed where family members lay into each other exclaiming “fuck you” repeatedly at Thanksgiving dinner. Make no mistake about it, it’s still a dysfunctional family comedy playing off the battle-scarring field that is any given Thanksgiving-Day dinner table, but the actor/filmmaker (Ike is pulling triple duty here, so clearly The Oath is a meaningful project to the versatile entertainer) has more on his mind thing going for the juvenile brand of comedy normally to be expected from him; the movie actually morphs into a twisted home invasion thriller tempting characters to head down life paths separating them from their own idealistic morals and beliefs.

Clearing up one crucial detail piece of business first, it’s paramount to note up front that The Oath does not take place in Donald Trump’s America, although the similarities are painstakingly visible. In this fictional but seemingly authentic portrayal of America, a new initiative is being introduced that will provide some form of government benefits to anyone willing to pledge allegiance with unabashed patriotism to their president in documented fashion (which admittedly, sounds like something Donald Trump would do and probably will if this film ever lands on his desk, God help us all). Holdouts are deemed unpatriotic and are left to make ends meet by themselves. The inner workings of the titular Oath are left unexplained, for better or worse (it would be nice to know more but such a thing could also bog down a relatively brisk 90-minute running time), but it’s mentioned that non-signers are being “taken away” by government officials. And I don’t just mean random civilians, as even Seth Rogen has been kidnapped per a news briefing. 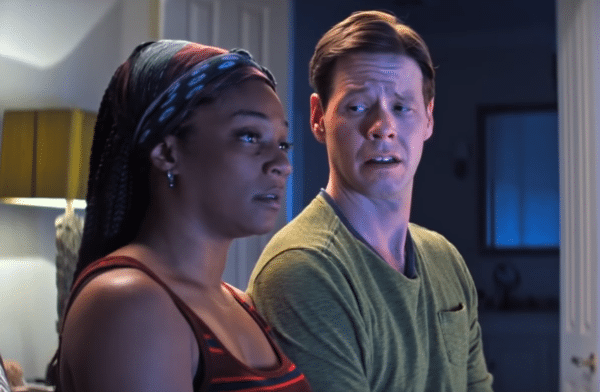 This information is vicariously received through Chris (Ike Barinholtz), a husband and father who seems to spend more time plugged into 24-hour news cycles than assisting with those blessed duties. Not only is Chris heavily opinionated about politics, he’s also unafraid to bring up his stances in a confrontational manner, which of course is always a bad sign when the holidays roll around (unless you’re some sort of masochist that enjoys verbal family warfare). His better half Kai (Tiffany Haddish, given the opportunity to put in a more serious-minded turn) shares the same ideals but is more levelheaded towards opposing views and not interested in all hell breaking loose over the special day. Enter Chris’s parents, his brother (Played by Ike’s real-life brother Jon) and his new girlfriend, his sister and her husband, most of which lean far right and have already signed the Oath. It’s not long before outdated and mean-spirited stereotypes such as Asians being bad drivers are brought up in casual conversation, stirring the pot and triggering Chris to retaliate, but as the situation amongst outside rally attendees being punished goes from bad to worse, well, Chris goes haywire. He even goes as far as indirectly lashing out against his own sister (Carrie Brownstein, who does a tremendous job expressing her confliction signing the Oath), someone he respects.

Look, much of what is here is hilarious (there are old people unaware of how to work the TV remote, which is as surefire as Thanksgiving happening itself), and I’m sure just about everyone that watches The Oath will be able to relate to someone, but this is just as much a Black Friday movie as it is a Thanksgiving one. And by Black Friday I don’t mean senseless shopping, I mean a dark turn of events involving life or death that is determined to drastically alter lives forever. A moral reckoning lies in the wake of the Thanksgiving-Day argument, one that has the potential to once again unite the family or divide them forever; regardless of what happens, Ike Barinholtz has a strong handle on the juggling tones and how to insert bits of comedy into the double-sided hostage environment. 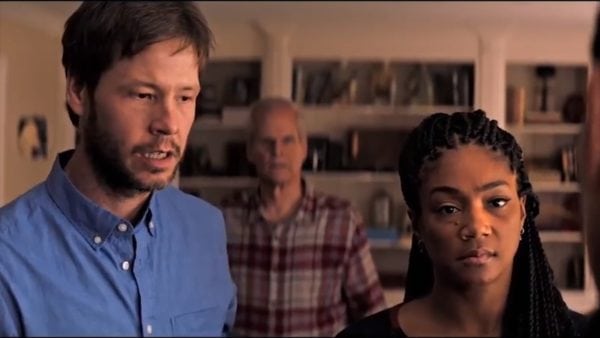 What does get lost is the intriguing warring of politics. The conflict between Chris and his sister is pretty much never addressed again, which is a shame because one of the greatest dynamics (and one that has far more potential than given the treatment of on-screen) is watching him accept that someone he loves and respects caved on something he can’t even begin to comprehend submitting to. Make no mistake about it, John Cho and Billy Magnussen playing government agents (one is hilariously deadpan, the other is in need of anger management classes badly) disrupting whatever peace remains of the household is amusing, but the film almost completely forgets what it is despite Ike Barinholtz throwing his all into the character of Chris. The ending also builds to a highly tense choice to make before frustratingly copping out with the weakest ending imaginable.

That doesn’t change the fact that the ride to the ending is filled with laughs and harrowing descents into violence. Chris is the kind of liberal most people can’t stand, the conservatives spout ridiculous nonsense such as anyone not signing the Oath being unpatriotic scum, both with Tiffany Haddish’s Kai serving as the voice of reason. Every family could use one of her, especially on Thanksgiving. The Oath doesn’t quite stick the landing its third act is going for, but Ike Barinholtz proves himself as bold behind the camera and willing to jump out of his comfort zone. Black Friday has never been this demented, which is a loaded statement considering the very nature of that “holiday” is fucked up beyond belief. I’m not going to go signing any patriotic oaths but sign me up for whatever Ike Barinholtz tackles next, actor or filmmaker.