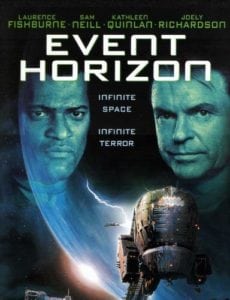 Seven years after its disappearance, the science vessel the Event Horizon reappears in orbit around the planet Neptune. The crew of the Lewis and Clark is sent to investigate the suddenly reappeared vessel and rescue survivors. Upon boarding the seemingly empty vessel, the rescue crew discover that the Event Horizon didn’t return alone. 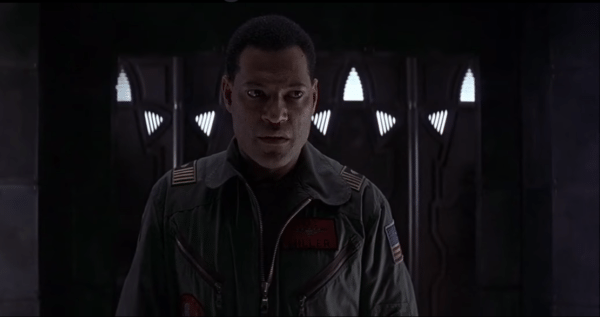 Even before the onset of space exploration, the vast void of space has had artists, philosophers, writers and film-makers looking up at the night sky and wondering “what’s out there”?

Turns out space is full of monsters that explode from our chest (or bowels) and genocidal Martians who think our planet would make a nice holiday home.

While Alien is arguably the kings of sci-fi horror, there is one little film that often comes up when discussing the terrors that lurk beyond the stars. One little film that managed to subvert its initial failure and grow to become a full-blown cult classic. I am of course referring to Paul W.S. Anderson’s sci-fi horror Event Horizon.

The cast is a motley bunch of familiar faces ranging from blockbuster regulars and cult favourites who all do a solid job with their parts, managing to take the rather stock characters they are saddled with and make them memorable and engaging.

Sam Neill’s performance as Weir is my personal favourite, with Neill managing to portray himself as a sympathetic science expert who we pity given his unfortunate past, but also find intriguing with his commanding knowledge of the science behind the Event Horizon’s disappearance.

It’s in part to Neill’s fine performance that he (and the film) trick you into thinking he’s going to be the hero of the piece, but as the horror starts to pile up Neill transforms into a rather hammy but very entertaining villain who we can’t help but raise a smile at.

Laurence Fishburne also does a great job as the Lewis and Clark captain Miller, an initially forceful and rather unlikeable man of the machine who gradually sheds his authoritative exterior to reveal a guilt-ridden man haunted by an act that cost the life of a friend. 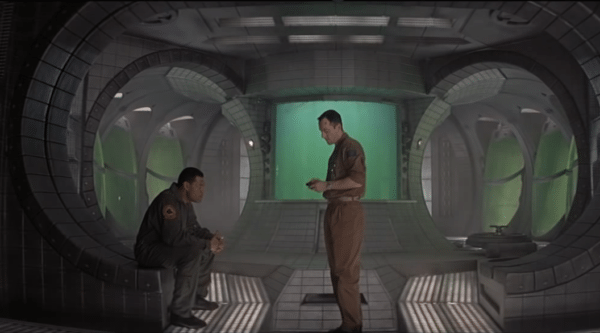 The scariest performance of the film is easily Jason Isaacs as the Lewis and Clark’s doctor D.J., a character of such ridiculous and sinister intensity that I suspect he was intending to murder his fellow cremates even before they found the Event Horizon. It’s an immensely fun and unsettling performance made the more unsettling by moments such as Isaacs suddenly putting a scalpel to his crewmates neck to calm them down. Certainly not the kind of treatment I’d expect from my local GP.

While most sci-fi horror films settle for the monster running amok on a gobbling up crewmates story, Event Horizon goes for a somewhat different approach. Instead, it’s the titular ship itself that is the monster. The film’s setting around the planet Neptune also means that we have the constant appearance of thunder and lightning. It’s a bit like the crew of the Lewis and Clark are the couple whose car breaks down in a storm and the Event Horizon is the creaky old manor in which they seek shelter.

The production design is what sells the creepy nature of this ghoulish looking ship, with its outer design heavily inspired by Gothic architecture, with the Cathedral at Notre Dame said to be a key influence.

The engine room set is my particular favourite, with it looking not at all like something that powers a spaceship and more akin to something built by the Cenobites for inflicting all manner of pain. The reactor core that sits in the centre of the room might look too impractical and sinister for the purposes of travelling through deep space but damn it does it look cool.

Eagle-eyed viewers might notice that the sets offer subtle hints at darker things to come, such as the in the bladed chamber that precedes the engine room carrying nine rings of spinning blades in reference to Dante’s Inferno, and if you look really close you’ll notice that some doorways resemble the shape of coffins in a nice bit of creepy design.

When it comes to gore and death, Event Horizon is a rather curious affair. On one hand, the gore we do see is rather unpleasant and subtly stomach bothering what with eyes bursting, blood spewing and an especially graphic aftermath of one character being gutted and strung up from hooks.

On the other hand, there is clearly a lot of really nasty stuff that was cut from the film, a fact confirmed by director Paul W.S. Anderson who stated that producers, disgusted by the extreme gore, demanded that he make significant cuts. I would argue though that cutting of the more graphic stuff works to the film’s favour. After all, the horrors in your head are far nastier than anything Hollywood’s finest effects artists could conjure up.

Sadly the producer’s cuts also affected other elements, with the film being somewhat shorter than Anderson planned, with the film being reduced from 130 minutes to its final 96. Even at 96 minutes, the film is still a fast and furious watch with fast pacing that keeps you gripped from start to finish. The film also, despite its runtime being cut down severely, manages to set up and develop the characters enough so that their inevitable deaths still manage to leave an impact.

Although I feel with that extra 30 minutes or so, the characters and story could have been further explored and there are hints of what the film could have been had it not been cut down. I was really intrigued to know more about Kathleen Quinlan’s character Peters with the brief hints and flashes we see suggesting at something that could have made for a disturbing plot development rather than just the mildly creepy one we get in the final film.

Is Event Horizon perfect? Of course not, the dialogue is often clunky, the cast while largely great do sometimes make some questionable acting choices that should have maybe done with a second take. Sam Neill’s screams are the same noise I make when on the toilet with food poisoning. The plot is also rather thin on the ground and, while it does work, I would have liked to know more about the backstory to the Event Horizon’s voyage and of the characters. 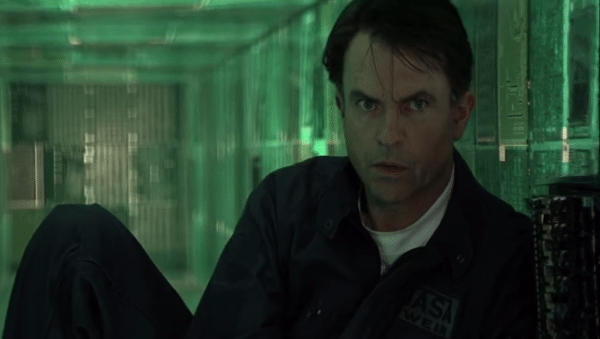 That being said, with great performances, tight pacing, impressive visuals and some fantastic set design, Event Horizon is still an immensely fun haunted house ride. Check it out if you’ve never seen it and even if you have seen it give it another watch. Either way, a good time will be had by all.