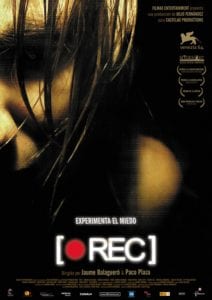 TV presenter Angela Vidal is accompanying a crew of a Barcelona Fire station as part of a television documentary. When the crew is called to what appears to be a routine rescue in a high rise apartment block, Angela, the fire crew and the residents find themselves sealed inside the building while a dangerous infection begins to rapidly spread through the complex. 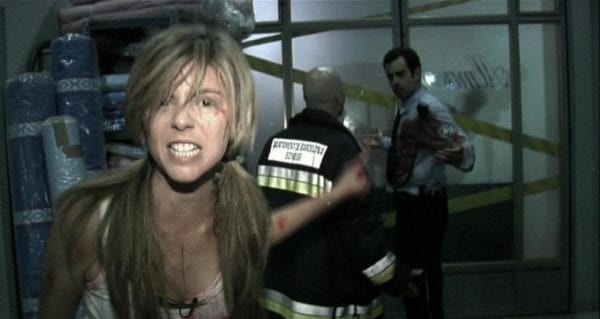 I’ve said it many many times before but I’ll say it again, I’m not a big fan of found footage. Some found footage films are good and I’ve reviewed a few of them in years past, but several years of terrible Paranormal Activity films and various imitators have left me sour on the genre and I find it to be an overplayed format that for many years has suffered from a severe lack of innovation and originality.

However, there is one found footage film that does terrify me and it’s one of the best of its kind, the Spanish horror simply titled [REC].

Part of what makes [REC] works is its presentation. The camera work is often disorientating with the “shaky cam” turned up to 11. While having the camera shaking all over the place would be irritating in an action film or a less enjoyable horror film, in [REC] it makes the viewer feel like they’re in the thick of the horror, with the up close and personal approach only adding to this feeling. You find yourself lurching away from the screen every time we get an all too close and personal shot of a zombie grabbing for the camera and it never fails to get a jump out of you. This is how you do jump scares, you keep them coming thick and fast with a constant sense of threat behind them with no false payoffs. Take heed Hollywood.

The shaky cam also allows for some great moments of sheer terror, such as when cameraman Pablo peers over the edge of the stairs to be confronted by the horrific sight of the infected residents looking straight up at him, a moment that is not only one of my favourite shots of the film, but also a moment that had me gripping my seat with the tightness of a vice.

The brilliant visual approach is complemented by what I consider to be some of the greatest scariest sound design ever produced for a modern horror film, with every loud bang and screaming sound likely to make you crap your pants. The sounds made by the infected are especially terrifying, but not when they are banging on the doors which our heroine is hiding behind. The infected are scariest when they move away from our heroes and you can still hear them shrieking in the distance. Quite simply, the sound design is fucking terrifying and it’s one reason why I highly recommend you don’t watch this film with a full bladder. 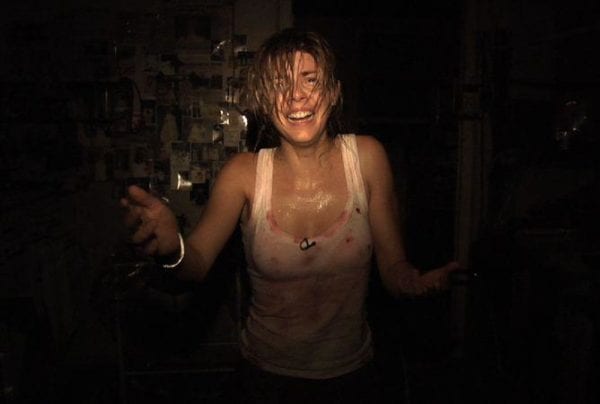 The acting on display is also excellent with many of the performances feeling naturalistic, especially the performance of Manuela Velasco as Angela, with Velasco’s past as a TV presenter on Spanish television only serving to make her performance feel more authentic, especially in the early parts of the film which feels very much like one of those fly on the wall workplace documentaries that often clutter up our TV screens.

Another part of what makes the film work is that the plot is simple and to the point. The viewer, like the characters, are largely kept in the dark as to what is causing the infection until the final few minutes and even then the film doesn’t get bogged down in exposition. In fact, the exposition instead leads to a creepy night vision scene in which acclaimed creature performer Javier Botet worms his way into our nightmares as a grotesquely deformed demonic girl.

Let me cap off this review by imploring to you; go and watch [REC]. Seriously, go and watch it now because it’s is easily one of the most exhilarating and terrifying horror experiences that I’ve ever enjoyed. With a disorientating visual style that puts you in the thick of the action, naturalistic performances and some of the best sound design in any horror film, [REC] is easily one of the greatest found footage horror films ever made and I’m proud to rank it as one of my favourite horror films. I can’t stress enough how much I adore (and fear) this film. Just go and watch it.