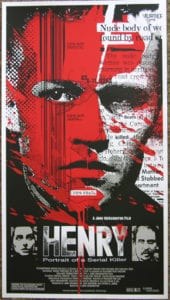 Henry and Otis are a pair of former convicts trying to make a living in Chicago when they are joined by Otis’s sister Becky. Unbeknownst to his room-mates, Henry also moonlights as a serial killer, able to kill without remorse or hesitation and with frightening impunity. 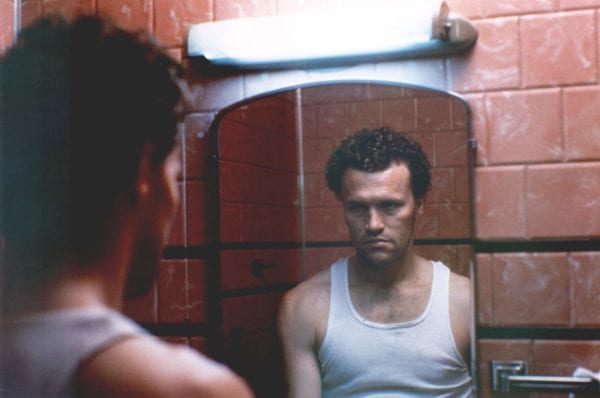 For today’s review, we’re taking a turn into the darkest corner to look at a truly grimy slice of 1980s horror. However, we’re not looking at any garden variety slasher in which a maniac in a mask butchers teenagers. Instead, we’re taking a look at more dramatic fare with the critically acclaimed horror drama Henry: Portrait of a Serial Killer, a dark and depressing film that shows us the inner workings of a serial killer in a way very few films dare to.

Based loosely on the crimes of real-life serial killer Henry Lee Lucas and his partner Otis Toole, the plot of Henry is a rather simple (if very dark) “week in the life” type story. While the film could have easily been a generic slasher flick, director John McNaughton instead uses the story of Henry to create what is a rather depraved and disturbing love story.

While the film might seem to suggest a love story between Henry and the innocent Becky, I would argue that the real love story, if you can call it that, is between Henry and Otis. The pair starts off as close friends and then gradually, as Otis finds out about Henry’s murderous habits, the two become partners in crime. The partnership between Henry and Otis is put into jeopardy by the presence of Becky, with an apparent air of jealousy and tension arising with between the two due to her arrival. And as with many love stories, it all ends in heartbreak – very violent and bloody heartbreak.

The main draw of the film is the performance from Michael Rooker in the title role of the nomadic murderer Henry, a cold and ruthless monster seemingly devoid of any kind of emotion other than his need to kill. Rooker is a haunting figure who somehow has the rare ability to present his character as being almost entirely devoid of humanity, one who you can never really tell what he’s thinking or feeling or even if he feels at all. I have no idea how he does it, but Rooker is a rare actor who can present himself as having seemingly nothing behind his eyes, just darkness. 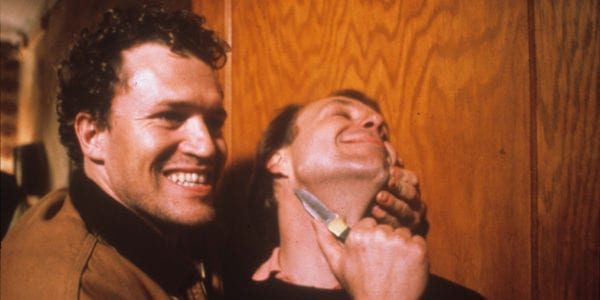 A monologue by Rooker to Becky about how Henry was abused by his mother and his eventual murder of her is a highlight of this great performance. Rooker’s delivery is chilling in how bluntly he describes the abuse he took, looking as if he can barely contain his hatred for the woman who tormented him, his face looking ready to explode with rage. Then he makes a mistake and apparently forgets the method in which he claimed to have killed his mother, suggesting that his displays of emotion are merely a show for the outside world. It’s a frightening performance from Rooker and it’s plain to see why he’s since become one of the sought-after character actors in the business, it’s because he’s amazing.

While Rooker might dominate proceedings, the supporting performances from Tom Towles and Tracy Arnold as Otis and Becky respectively are equally strong. Towles (who you might recognise from Night of the Living Dead) portrays Otis as arguably an even more depraved killer than Henry, with Towles brilliantly portraying the barely contained glee that he feels when murdering innocent people. Towles also excels at really getting under your skin, with his rather ghoulish features and almost gargoyle-like grin.

Tracy Arnold manages to bring a welcome sense of sensitivity and humanity to counteract the dark malice of her co-stars, with Becky managing to be a sympathetic and deeply tragic character who just wants to make a decent life for herself but seems to struggle to escape her troubled past. I also have to commend Arnold for a particularly sad monologue in which she details Becky’s abusive relationship with her monstrous father, with Arnold’s very matter of fact descriptions making the scene all the more tragic, like the experience has left her somewhat emotionally empty.

While it is very much a horror film, this is not the type you gather around with your friends to have fun with. While the violence depicted is largely off screen or punctuated with some rather cheesy music stings, the film has more than a few moments that are rather unpleasant to watch, with it captured in a somewhat detached fashion. The most infamous and certainly most controversial sequence in the film is when Henry and Otis are watching a home movie in which they murder a family. It’s a scene where the music stops and we simply sit and watch a pair of maniacs viciously kill innocent people out of a depraved sense of fun. It’s chilling in the rather cold and clinical way in which the scene plays out, with the camera never cutting away from the killer’s TV screen until the killing stops and we have to sit there and endure it as our ears are filled with screaming and the pair’s ghoulish taunts. Then Otis rewinds the tape because he “wants to watch it again”.

Henry: Portrait of a Serial Killer is a film that is likely to polarise viewers. It’s not a fun film to watch in the slightest and some might feel the film to be an unpleasant chore to sit through. However, in my view, the film is a brilliant insight into the mindset of a monster, with Rooker’s chilling performance and the overall gritty low budget feel of things only adding to make the film a more engrossing and disturbing experience. Check it out if you’re curious but be warned that it won’t be for everyone.