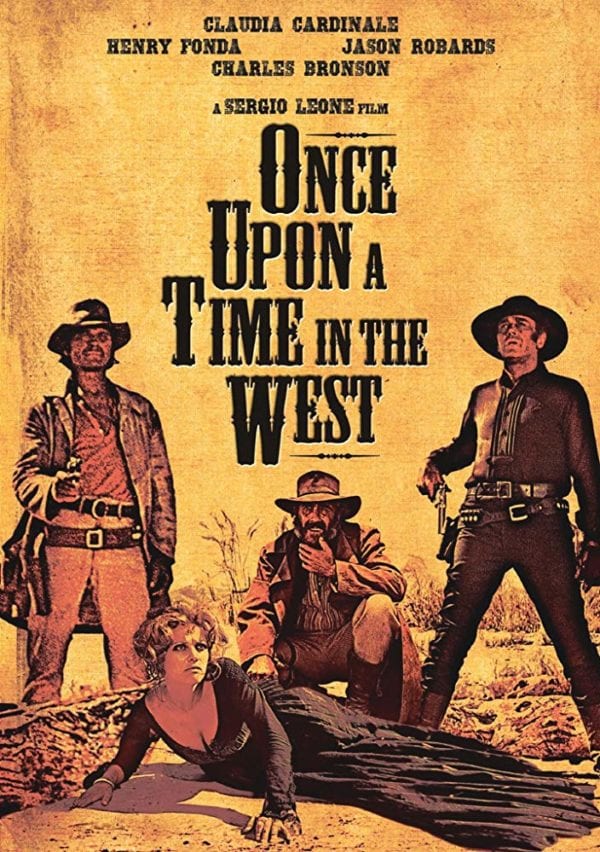 By the time of the mid-1960s rolled around, the classic Hollywood western had fallen on hard times. The countless deluge of dusty shootouts and morally upstanding white-hatted heroes battling black-hatted bandits had left audiences tired of the genre and it looked set to move into the dustbin of cinematic history.

Thankfully, the genre would receive a new shot of life in the form of the Italian director Sergio Leone whose film A Fistful of Dollars offered a more violent European take on the western formula and in the process creating a whole new sub-genre of western; the Spaghetti Western.

While it would seem like a no-brainer for this entry to look at any film in Leone’s Dollars Trilogy starring Clint Eastwood, I like to try and be a bit different from the pack. For me, Leone’s Spaghetti Western masterpiece comes in the form of his epic love letter to the genre he helped reinvent. This is Once Upon a Time in the West.

After her new husband and his family are murdered by a gang of hired killers, Jill McBain finds herself in the middle of a conflict not just over her late husbands land, but also between hired killer Frank and a mysterious harmonica-playing gunslinger looking to settle an old score.

Taking over from Clint Eastwood as the mysterious seemingly nameless protagonist is the equally formidable screen presence of Charles Bronson as the enigmatic gunslinger dubbed “Harmonica”. Bronson, like Eastwood before him, was an actor who was at his best when saying little, with his hardened features and steely-eyed stare saying far more than dialogue could.

Contrasting with Bronson’s more serious and quiet performance is Jason Robards more light-hearted show-stealing performance as Cheyenne, a loveable rogue who is as quick with a gun as he is with his wit, offering funny yet insightful observations. Such as telling Jill in his rather roundabout way “you remind me of my mother. She was the biggest whore in all Alemdia and the finest woman there ever was”.

The real surprise of the film is Henry Fonda as the evil killer Frank, with Fonda delivering one of his finest performances as he casts aside the heroic clean-cut persona he had perfected throughout most of his career. It’s a master-stroke of against-type casting and a performance that Fonda excels in, with the actor’s piercing blue eyes and otherwise friendly seeming manner only serving to make the characters violent actions all the more shocking and his screen presence all the more menacing.

The only performance of the main cast that is a tad difficult to rate is that of Italian actress Claudia Cardinale who, unlike her English speaking co-stars, is dubbed throughout. However, based on her physical performance alone, Cardinale does manage to more than match the subdued nature of her co-stars, with her scenes with Robards being especially great due in part to her excellent chemistry with the actor, even if they are obviously speaking different languages.

As with pretty much every Spaghetti Western, the real star is Ennio Morricone, easily one of the greatest film composers of all time with Once Upon a Time in the West boasting one of the best film scores of all time. Part of what makes the score work is due to Morricone clever trick of giving characters their own distinctive theme, with their themes playing as both a means to signify their arrival into a scene (as with Cheyne’s rather humorous honky tonk sounding theme) but also to convey their emotions.

In other cases though, as with Frank and “Harmonica” who share a theme, it foreshadows a deeper connection between the characters that it only revealed in the final showdown between the two foes, with the sounds of Franks aggressive guitars clashing with the ominous sounds of the harmonica. My personal favourite theme is that of Morton, a character who doesn’t quite leave a big mark on you, but whose hauntingly beautiful theme manages to convey the man’s desperate dreams more than any amount of exposition could.

Leone’s direction is also something to behold with his meticulous use framing and editing managing to make every intense stare between armed gunfighters into a nail-biting ordeal that could erupt into violence at any moment.

The final duel between Frank and “Harmonica” is easily the finest displays of Leone’s masterful direction with this final clash being one of the finest duels ever depicted in any Western. The scene is superb in its presentation and framing, with the two men circling each other while the music blasts, sizing each other up before taking what might be their final positions.

The two stare at each other, Leone filling the frames with their faces before zooming into their eyes, allowing the viewer to stare into them, while they stare back at you. Morricone’s music builds and builds to the point that you find yourself digging your nails into your legs till you draw blood. The fantastic editing quickly cuts back between the two foes and after ten gruelling minutes of build-up and just as you’re about to wet yourself with excitement, it’s all over in seconds with a single gunshot.