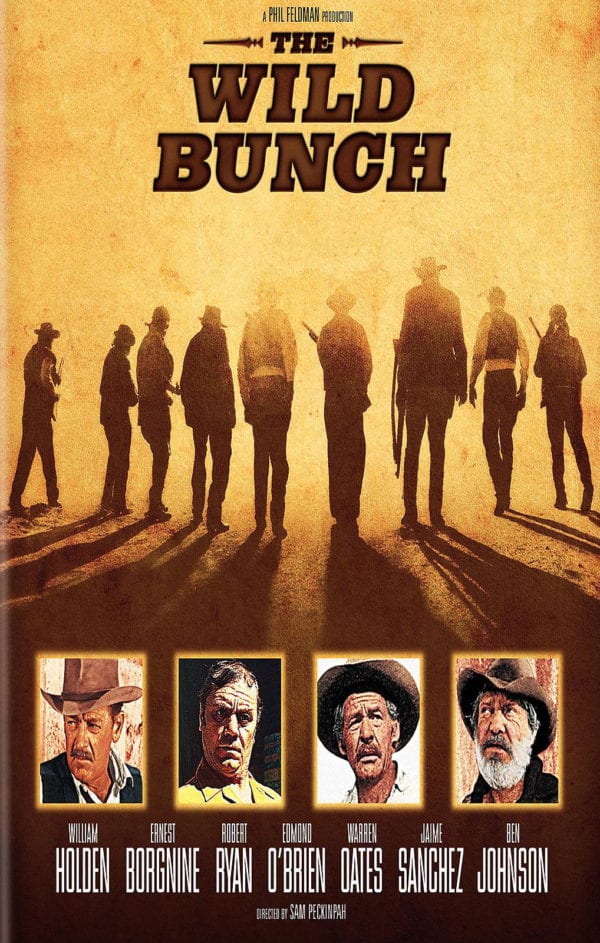 While Sergio Leone could be credited with helping to save the Western from extinction by injecting some European flair into proceedings, it would be unfair to ignore the influence of American directors who also managed to take the dusty old genre and get it fired up again by injecting some fresh blood and lots of it.

One such director was the troublesome Hollywood rebel Sam Peckinpah who brought the American Western kicking, screaming and almost certainly bleeding into the modern era with his ultra-violent tale of the dying days of the Old West. This is The Wild Bunch.

In 1913, a group of ageing outlaws seek to pull one last big score before retiring. This mission takes the gang to Mexico where they are recruited by a vicious general to steal some weapons to fight a rebellion in the country, while also trying to evade capture from a rival gang led by a former friend.

The theme that is omnipresent throughout The Wild Bunch is that of the changing of the times. The titular gang led by Pike Bishop (William Holden) are your classic western outlaw gang, but they are well past their prime and entering their golden years.

The gang are contemplating what their future might hold with Pike stating the gang has “got to start thinking beyond our guns. Those days are closing fast”, with the final score that the gang pulls off being seen as both a means to earn enough money to retire on, but also as a final shot at glory for this old gang. However, all this mission shows is that there is no future for this group of men made in the Old West and as the Old West looks doomed to die so too are the men of the Wild Bunch.

The film’s cast is a veritable bunch of veteran stars including William Holden and Robert Ryan both of whom were themselves entering the late stages of their own careers, lending their performances a rather poignant quality. While it would be difficult to critique each performance (the cast is fairly large), what isn’t difficult is to say all the actors deliver terrific performances, with the all excelling at creating a cut-throat bunch of outlaws who, despite being essentially bad guys, you still find yourself rooting for, even as they commit mass amounts of murder and robbery.

What marked The Wild Bunch out from most American westerns before it is its, for the time, graphic violence. Before, most westerns would feature gunfights in which everyone struck a dramatic pose as they fell and no one ever seemed to bleed when they took a bullet. With The Wild Bunch, Peckinpah shows us that the Old West was anything but bloodless.

The film is littered with spectacularly choreographed gun battles with Peckinpah’s creative camera work, wild editing and use of slow motion creating blood-soaked ballets that are almost as beautiful as they are brutal. Controversial at the time of release, the gun battles don’t shy away from spraying as much claret as they can, with the film being filled to the brim with grisly shots of men’s innards being blasted out from their guts and their blood splashing across the screen in glorious slow-mo.

The film’s climax, in particular, is easily one of the best ever created for a Western or any film for that matter and even puts most modern movie gun fights to shame. The scene works mainly because the film just doesn’t give us the guns right away. Instead, Peckinpah builds up the tension slowly with a combination of factors, such as the slowly rising musical score and the careful framing of the Bunch as they take what might just be their final walk. Then just the tension reaches breaking point a gunshot breaks it all and the scene soon erupts into a ferocious crescendo of bullet-strewn beauty that makes for one hell of a finale.

The Wild Bunch is a bullet-riddled masterpiece that laments the passing of the Old West in the most violent way possible, while never managing to let the violence overshadow the sombre themes of ageing and the changing of the times. While it might have its slow moments, the gripping performances from the cast, the ferocious and violent set pieces and the overall skill in which they are depicted, ensure that The Wild Bunch more than lives up to its name. Check this one out before Mel Gibson’s pointless remake comes out.