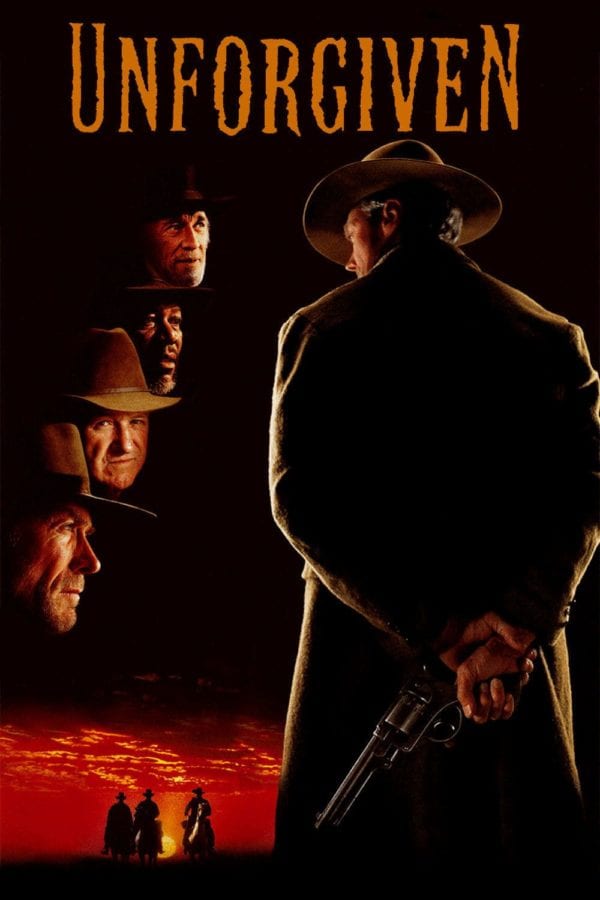 John Wayne with his folksy mannerisms, the iconic voice and gigantic screen presence is often held up as the personification of the movie Western. However, while I might have enjoyed his work in The Searchers (as well as a few other films) I’ve always had mixed feelings about Wayne in general and I’ve found his usual morally upstanding father figure/moral guardian routine a bit hokey at times.

For me, the man who defined the west on screen was that of Wayne’s main rival for the title of cinemas most famous cowboy; Clint Eastwood.

Eastwood acted in and directed many westerns throughout his lengthy career and while I could spotlight any number of them, I’ve decided to close out this feature appropriately enough with the film in which he bid farewell to the genre that turned him into an icon. That film is his Oscar-winning swansong to the West entitled Unforgiven.

William Munny, a retired outlaw turned farmer, is recruited to hunt down and kill a pair of cowboys whose violent actions have left a prostitute scarred for life, with the veteran gunslinger seeing this last job as a chance to secure a brighter future for himself and his family.

Eastwood’s performance as Munny might be one of his finest with the actor/director bringing his usual understated quality to the role, full of icy stares and gravelly voiced insights. However, this is no mere retread of his “Man with No Name” persona, with the Munny character being a more complex character than the nameless poncho aficionado.

Munny might claim to have renounced violence and killing at the film’s opening, claiming his late wife had cured him of “drink and wickedness”. However, Munney is clearly not suited to life as a farmer and his attempts to live a civilian life are far from ideal. It’s only when he straps on the guns once more that we begin to see him slowly slide back into his true self, a ruthless killer who “killed everything that walked or crawled at one time or another”. This change is subtlety exemplified by Munny’s shooting skills, beginning the film as a hopeless shot incapable of hitting some cans, but by the end he never misses.

Up against Eastwood is Gene Hackman in a towering Oscar-winning performance as “Little” Bill Daggett, a lawman who takes great deal pleasure in the violence he dishes out but also appears to long to leave it behind. Hackman’s performance is easily the strongest of the film, with it being one of darkness and malice, but also one of subtle moments of longing and humanity. The man just wants to finish building his house and live in peace. The main problem though is that he’s a lousy carpenter but an exemplary killer.

Eastwood’s direction is focused and methodical, devoid of flashy visual tricks and content to let us soak up the atmosphere of a scene, often discarding dialogue when actions would speak louder. It’s a sentiment which also speaks for the characters, with the quietest characters often being the most dangerous. The pacing is slow and allows the film to really draw everything it can from the characters, allowing the viewer to really get under their skin.

The film as a whole can be seen as Eastwood’s personal deconstruction of the traditional movie western, turning many of the well worn tropes of past film (including some of John Wayne’s and his own films) on their head, almost as if Eastwood is putting his own cinematic past under the microscope and taking it apart.

For instance, I really like how the film treats its depiction of violence. Many westerns feature the hero of the piece gunning down dozens and thinking very little of it with many of them ending with a big spectacular shootout in which the heroes always prevail and all is right with the world. Unless it’s The Wild Bunch where the world is not so much put to right but left riddled with bullets and bleeding in slow motion.

In Unforgiven, the body count is very small with very death possessing some kind of emotional meaning to it, with every kill or attempted kill having a profound impact on the characters. Take the character of the “Schofield Kid” who throughout the entire film is a cocky gunslinger who acts like he’s Billy the Kid and Jesse James rolled into one he’s such a gunslinging badass. In reality, he’s never killed a fly and by the end of the film when he finally gets that kill he’s been chasing, he’s a broken man whose actions will forever haunt him.

The film is not without its flaws, with the slow pacing (while effective for much of the film) being just a tad too much at times, often leaving the film’s early moments feeling just a little bit dull.

The main sin of the film, however, is its criminal underuse of the supremely charismatic Richard Harris who appears for what is essentially an extended cameo as “English Bob”, a loud brash man who seems to piss off everyone he meets with his diatribes about the “majesty” of royalty. It’s an entertaining performance but it’s not a good sign for a film to have a character whose absence wouldn’t have made it any better or worse.

However, I admit that these are minor nitpicks and once the film it gets going it becomes something truly special, especially in it’s dark and violent climax in which Eastwood fully re-embraces his iconic and violent cowboy persona.

With a slow burning story that acts as a careful deconstruction of the genre that made Eastwood into the legend he is today, terrific performances from the director and an Oscar-winning Hackman and a poignant sense of finality, Unforgiven is a fitting goodbye to the Western genre from one of it’s brightest and biggest stars.

Thank you for joining me on this short trip into the western genre and I hope I’ve convinced you to take time away from your own personal video game cowboy escapades to take a look at some cinematic cowboys doing what they do best.

However, I barely scratched the surface of the wide open plains of cowboys, Indians, outlaws, lawmen and stagecoaches that this genre has to offer. Let me know in the comments what Westerns you’d recommend and maybe just maybe I’ll spotlight them in a future feature.

Do feel free to follow me on Twitter at Graeme Robertson@robertsong93 to send suggestions and to keep up to date with my latest reviews and features.