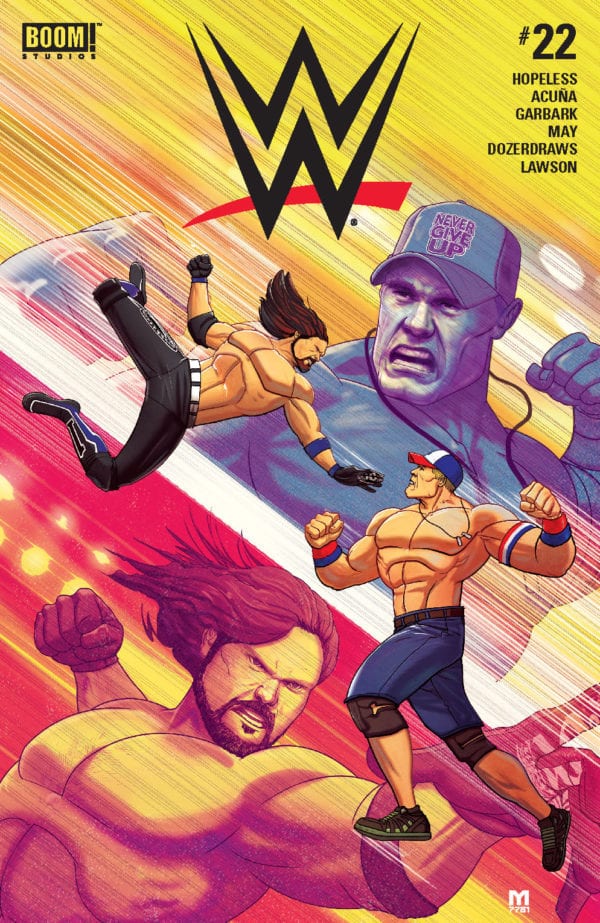 Boom! Studios latest WWE outing, the 22nd issue in their on-going series, shifts its focus to AJ Styles and his feud with John Cena from the Summer of 2016.

Writer Dennis Hopeless decides to use AJ’s relationship with The Club as the supporting narrative for the in-ring story, and for the most part, it is a success. The real-life friendship of AJ Styles, Karl Anderson and Luke Gallows has been well documented and a lot of the exchanges in this comic feel as though they could have legitimately taken place.

Boom! Studios, and Hopeless, in particular, have an excellent knack of mixing kayfabe and reality and they have delivered once again here. The Triple H exchanges at the beginning of the story feel slightly unnecessary, and it’s hard not to laugh as AJ Styles and John Cena have a bit of a barney in a supermarket car-park like two angry middle-aged dads.

Hopeless does an excellent job of keeping it all together well though, and the story comes to a nice conclusion with the two men’s epic encounter from SummerSlam 2016. The comics have not stayed with wrestlers for too long in recent issues, so it will be interesting to see if WWE #23 continues to document AJ Styles’ career, or wherever it looks elsewhere for inspiration.

These comics also have the ability to remind fans of just how interesting certain characters are. Karl Anderson and Luke Gallows feel as though they have a lot more personality in the pages of this comic book than they do on weekly WWE television, and it’s a nice reminder of the excellent chemistry the two men have with AJ Styles.

Needless to say, Serg Acuna, who also worked on AJ’s story in the last issue, once again delivers here, doing not only an excellent job of bringing the characters to life but also of making the in-ring action look exhilarating.

The supporting story ‘Tales of the Swiss Cyborg’ continues the publisher’s trend of trying out weird and wonderful styles in their short stories. The artwork here, from Dozerdraws, is a far cry from what Acuna delivers in the rest of the comic, and while it may not appeal to me, I’m sure it might capture the imagination of some of the younger readers.

Once again, Hopeless and Acuna have delivered yet another great edition in this on-going WWE series. AJ Styles makes for an interesting protagonist, and hopefully, we can see a little bit of more his antics with The Good Brothers in coming issues.