Tom Jolliffe offers an insight into no budget film-making, and why you should aim as high as those means can reach…

I won’t claim to be Steven Spielberg (or even Steven Spielbergo) but aspiring film-makers can learn a lot from not just the industry masters of past and present, but from each other. I’ve spoken of this before, and the importance of networking and building a core group of mutual minded folk you may one day want to call upon. In an industry where the money gets predominantly shared between the big swingers (and the big blockbuster films) there is a sea of creatives in the waters below clamouring for the scraps. If you can get money from someone to make a film that’s brilliant, but it doesn’t always work out that way.

Firstly, your ideas may not be politicised or tied into a current affair. If LGBT is subject of the week among the investing community, then they’re likely to want to fund LGBT films. Mental health films, BAME films, etc. Your goal may purely be to make a film without looking to hop on a movement. If you want to make something that is part of a movement that’s great, but you will find as many film-makers pushing the movement more than pushing the creative possibilities of their film. Meaning they’re riding a wave first, and thinking of the films content itself, second. Even further, occasionally cynical corners of production may only be box ticking as a way to secure funding easier. Plus if you hit a wave too late, investors are looking to pour money into different themes and you’ve missed the boat anyway. 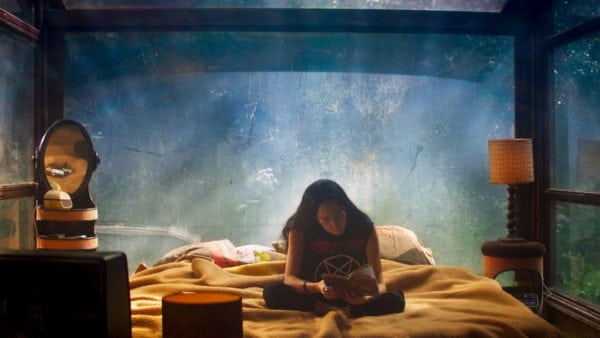 There’s another reason some may struggle to attain financing (which can be time consuming and arduous). That’s your pitch. If I look at a film like Mandy, that’s a film I’d absolutely love to make (because I’m batshit crazy). But imagine pitching it, and not having a first breakout film behind you, nor having Nicolas Cage on board? Imagine trying to do the uber-low budget version with unknowns and trying to scramble together 100k to do it. That’s a tough sell. Almost every potential investor is looking to make money. This is what makes funding short films so difficult, because it’s difficult to find a lucrative distribution platform. To an extent you’re often looking ahead. The short may lead to a near future feature, and features have more avenues to go.

I’ve written a couple of low budget genre features myself, which are currently in production (and a third will be drafted soon). Horror and sci-fi tend to sell more easily than what you might call more ‘high brow’ films. You can shoot a horror feature for 20k in a week or two, and have it out on DVD within a year. My job as a scriptwriter making a low budget horror or sci-fi that’ll be shot for well below a million buckeroos, is to make it as engaging as I can (not too self-serious) and then hope the film-makers follow suit. I wrote a feature tentatively titled Vikings vs Scarecrow. To paraphrase Ethan Hawke (on the subject of Logan) ‘It’s not Bergman.’ That being said, when the idea was pitched for me to write on spec, I had to do it. Who the hell doesn’t want to write a Viking vs Scarecrow film? I’d just won my first couple of awards for a short drama (Winter Hill) so how else do you follow that?

Here’s the thing. As a writer, I get urges. Sometimes I’ll write for fun. My tastes as a cinephile are hugely eclectic (from classics, to world cinema, to arthouse, indie, to pure good old fashioned bottom barrel B movies). A few months back I was watching a lot of Argento, Cronenberg and Lynch. I suddenly had an itch to delve into those avenues and to just shoot something completely in the style I wanted. Unless you’re Cronenberg, then selling a ‘Cronenberg’ type of short to potential investors is probably a no go. Plus I wanted to do it quick. I just wanted to do it. That meant one thing, I had to come to terms with shooting for nothing. I’ve made films for decades with my brother, Oliver (usually for our own amusement). He knows cameras. He knows editing and I know he works lightning fast in post (and does everything from sound design to grading). So essentially he’s doing 7-8 different jobs. Firstly, that’s a godsend in low/no budget film. I’ve been the same. I’ve produced, done location work, acted, sound recording, focus puller (shit focus puller), visual effects, fight choreography, location scouting, composing and casting. I just wanted to be a writer, but this is how things work out. As it is, I’ve enjoyed the on the job learning process of the other tasks.

So came The Dark Recess, from my keyboard, into script form. A short mystery/horror/thriller indulging a love of Videodrome, Stalker, Persona, American Psycho and Taxi Driver among others, and a desire to throw in some Argento inspired visuals (or as much as possible when you’ve got no money). From 50p red light bulbs from Pound Shops, to finding interestingly neon-lit locations, and to knowing Oliver could shoot something great looking for nothing, we set out to make something (hopefully) impressive. Something not just for our own amusement either. Like my other shorts, and like upcoming features, I want this to find an audience. Even if it’s 100 people and at least some of them like it, I’ll take it.

Continue on to the second page…