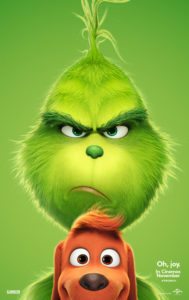 In his miserable cave on Mount Crumpet, overlooking Whoville, The Grinch lives a solitary life with his faithful dog, Max, But when discovers that the Mayor of the town has decided Christmas will be three times bigger than usual, he decides to put a stop to it.  By stealing Christmas.

If the thought of a Christmas movie in early November brings out the inner Grinch in you, then you’ve got company.  Dr Seuss’s The Grinch himself, is back on the big screen after his live-action outing in 2000 but this time as the star of the latest animation from Illumination.  He’s still green, lanky and miserable and most definitely anti-Christmas, this time given an extra incentive to put a stop to the celebrations by a declaration that this year’s festive season will be three times bigger than ever.

Nobody – with perhaps the exception of his human counterpart, Scrooge – hates Christmas more than The Grinch and that, by itself, should reassure his many fans.  In fact, the film as a whole is pretty much what you would expect: faithful enough to the original and to the reputation of the Miserable Green One.  This time, there’s a definite emphasis on the reasons for his general hatred of others and delight in making their lives miserable – plus a bit more, in the shape of a cumbersome message about the commercialisation of Christmas.  Another moment when you might unexpectedly find yourself agreeing with him.

Instead of the prosthetics and manic physical comedy that went with Jim Carrey’s interpretation, we now have a skinny Grinch with a paunch and voiced by no less than Benedict Cumberbatch.  Not that it’s obvious because he’s opted for an American accent and a variable one at that.  And, in case we’re missing the rhyming couplets of his creator, the voice of Dr Seuss is provided by Pharrell Williams, although he never bursts into song.  In fact, the only recognisable voice comes in a one scene cameo featuring Angela Lansbury, as the town mayor.  And good on Whoville for giving those chains of office to a woman.

Curiously, the relationship between the Grinch and his faithful hound Max, echoes that most British of one man and his dog partnerships, Wallace and Gromit.  Max has no voice, but plenty of character – and defiance when his master has one of his frequent cases of the grumps.  He’s summonsed by a bell every morning to serve breakfast – admittedly not dropping the Grinch into his clothes, but he does choose them from the wardrobe – and he comes across as the cousin from over The Pond.  He may not be up to Gromit’s standards, but he’s likeable enough and makes a good contrast to The Green One.

You know exactly where the film is heading from early on, in true Christmas Carol style, so there aren’t any great surprises.  But, as a piece of Christmas – or should that be pre-Christmas? – entertainment, it’s amiable and has enough laughs to keep the younger members of the audience happy.  Visually, it’s gift wrapped in all the bright colours of Christmas and, at times, is downright gaudy.  What that can’t disguise is that there’s little in the way of magic or sparkle.  There’s nothing new or innovative and Cumberbatch’s sprinkle of stardust can’t elevate it out of the ordinary.  An acceptable gift, then, but hardly top of the tree.