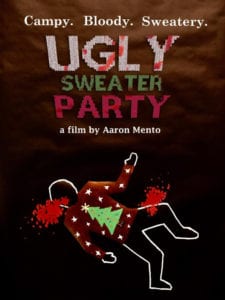 An ugly sweater party turns into a bloodbath when an evil Christmas sweater possesses one of the partygoers. 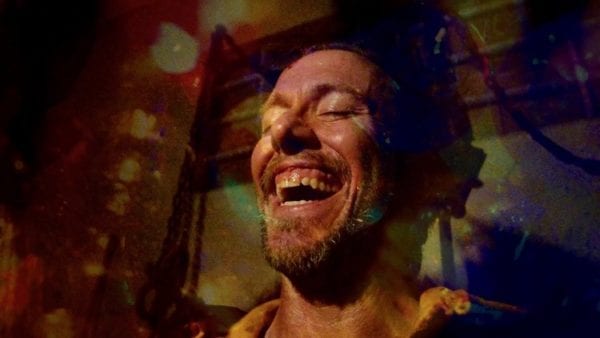 Character 1: “Your friend is being manipulated by an evil force that lives within his sweater.”
Character 2: “OK, that I can buy.”
Me: *spit take*

Listen. I watch *a lot* of Christmas Horror – Elves, Krampus Origins, and Mrs. Claus this month already – but Ugly Sweater Party is an invitation unlike any low-budget seasonal slashfest to date. A straight double-shot of Troma naughtiness chased by John Waters washover flavors (but, like, *really* low-fi). All the energy of grade schoolers taping afternoon guerilla smut at their uncle’s abandoned rental cabins, going for broke because they’ve nothing to lose. There’ll be a select cult of you maniacs who demand Ugly Sweater Party be played every Christmas since juvenile, z-grade exploitation decked in colored lights rarely surfaces anymore (all Krampus’ and vile little helpers). The remaining ninety-eight percent? Please record all post-watch reactions for my viewing pleasure.

Declan Rains (Sean Whalen) butchers four families one Christmas. He’s captured by Detective Brolin (Brad Potts), cracked open with a baseball bat, and Declan’s spirit inhabits his pentagram-embroidered sweater. Fast-forward to dudebros Jody (Hunter Johnson) and Cliff (Charles Chudabala) as they encounter a hobo who turns out to be Det. Brolin, doomed protector of Rains’ totem. Cliff, angry because Jody neglected to confirm the woodland rager their heading to is an ugly sweater party, snatches Rains’ tattered clothing for himself. Now one with the serial killer’s blue glowy apparition, Cliff must kill three innocents to achieve full woolen transformation. Sorry Camp Mandix, this year’s holiday party is about to get deadly.

Camp. Mandix. Say it out loud. We ridin’ the same wavelength?

You see, it’s satirical because – um, well, its more an all-out assertion that overworked beliefs in rigid morality are a direct coverup for shameful desires. Not very cheekily, either.

Oh, right. The sweater massacre. That.

As Mr. Mandix leads campers in the “Mandix Mambo” – cut to “Not Macho Man Randy Savage” beating a plastic bucket like a bongo – Cliff is ripping genitals off and drinking the bloodstream from his victim’s pelvic wounds. Jody and Hannah (Lara Jean) – a telepathic goth girl dubbed “witch” – are cursed by a time loop enchantment Declan uses to distract Hannah’s powers, in turn opening alternate realities where more campers keep appearing each reboot. It’s all very, random. Zero universe rules and stoner dumbfoundedness transitions into Mandix man-rubs or Mrs. Mandix writhing against a package of hot dog buns – any randomization of Camp Mandix horniness.

Then there’s Ernie (Jody Barton), yet another plot deviation.

At some point, as Cliff disappears and campers condemn perversion, ex-groundskeeper Ernie calls Mr. Mandix for his job back. No dice. Ernie’s then “incentivized” by this favorite metal band Omicida – who materialize in-person to score his chalkboard math montage (MVPs) – to build a particle laser cannon (props department found some colored plastic and tin foil) with intent to eradicate Camp Mandix. You know, because “sweater slasher” wasn’t enough? Might as well toss in a postal workplace shooting arc that has *nothing* to do with Jody and Cliff’s story! Just kidding. There are other ways to get a phaser cannon in Jody’s hands (weird sentence to write).

Ugly Sweater Party tries. Very hard. It truly does. Admittedly, the film’s opening interrogation brutality had me praying for a newfound sleazebucket anomaly. Then the film’s personality peacocks and the wrong kind of raunch overtakes. Jody’s pubic bush is forced into our faces early on because that’s Ugly Sweater Party humor. Multiple prosthetic dicks, STD gags, diarrhea ejection, boner jokes – scenes trying *too* hard to earn high marks of offensive entertainment. Provocateurs with kindergarten execution, which – no shame – will tickle some of you silly as bimbos drink sludge from phallic sweater tentacles.

The more Ugly Sweater Party demands to be “weird” and “dangerous,” the more shock-jock charms deteriorate. Camp Mandix is a silly, structurally barren den of sin with nothing to say beyond repressed homosexuality jokes. The ugly sweater prop gets laughs as it fully transforms into scarecrow demon mode, but ultimately gimmicks fade. Performances? You know what you’re getting into with a movie like this. Cliff’s genital mutilation meat-yank? Gonzo to the point where my jaw dropped – but then characters start uttering irredeemable dialogue as CGI effects replace otherwise practical body objectification. Less is so much more in this case, which is unfortunate given how every gag goes the extra mile giggling itself stupid.

Let’s not scrutinize technical quality because Ugly Sweater Party clearly doesn’t pocket the capital to compete with big dawgs, medium mammals, or even small fries. Edits are rough, production a bit backyard home video, but at least Aaron Mento’s metatextual original song lyrics add a dosage of thematic background cheer? I’m a sucker for crazed Christmas cinema, and even at that, this is a *hard* recommendation if you can’t name at least five Troma titles you’ve appreciated. Proceed with EXTREME caution, but credit where credit is due – what the FUCK is this movie.