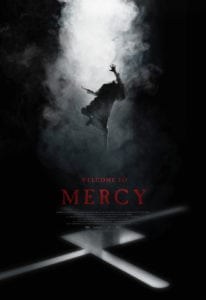 When a single mother begins to experience symptoms of the stigmata, she seeks the help of a local priest and nun to help her understand what is seen and unseen. 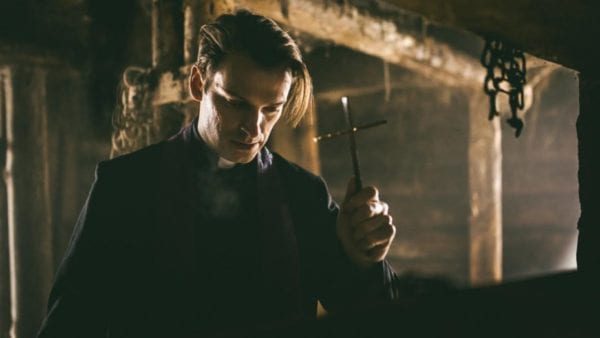 Tommy Bertelsen’s Welcome To Mercy tackles demonic possessions from a fresh angle, but individuality alone does not assure greatness. Kudos for explorative vision, but differing dualities shrug a weaker fright level. It’s telling when credits roll and questions about continuity remain – especially when accompanying friends mutter *different* queries. Multiple watches may benefit this sleepy satanic story, but at 103 minutes, there’s not much motivation for retreading blessed waters. Not a wasted run-in with the devil, but more of a soft chant versus chorus of screams.

Kristen Ruhlin – who also notches a screenplay credit – stars as Madeline, an American mother returning to her Latvian home and ill father. Although this is just the precursor – a catalyst – to later madness as she experiences full-on stigmata and almost kills her daughter. Father Joseph suggests Madeline seek refuge at Mercy, a nunnery where inner demons can be vanquished. If not for her personal preservation, then for the safety of those around her.

Truthfully, Welcome To Mercy opens with intrigue upon Madeline’s bleeding hands and feet. Wounds bloom like flowers as she’s tossed and dragged around a warm cottage cabin by invisible forces. Flashbacks to lil’ Madeline being whisked outside her home by papa recur. She’s suffering from an underworld soul-eviction tangled with tragedy from a young age, which is what brings us to Mercy – where prayers of conviction hope to cast out embedded evils. 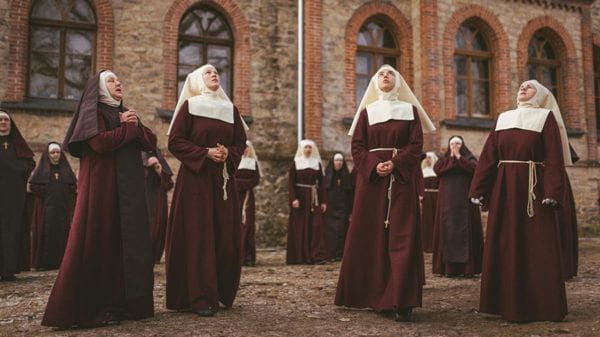 Then again, this is also where Welcome To Mercy falls apart. I’ll remain spoiler free, but Bertelsen and Ruhlin trade “familiar” possession beats for far less intriguing ruminations on God, transference, and blasphemy. Nuns tinker under steel blue tractor hoods and play “games” by predicting sins after sniffing each other’s blood, but Madeline’s quest for answers paces without ease or deft progression. Mother Superior (Eileen Davies) taps into repressed memories – a bottomless well Madeline envisions herself pulled into – only to be swayed from conclusions by coy new acquaintance August (Lily Newmark).

Generic flashback jumps and wing-hooded convent garb are 80% of what’s offered. Drabness in the name of their lord.

From here we learn the truth about Mercy, Madeline’s upbringing, and the significance of a diamond-zag scar. By that I mean it’s hard to tell priest characters apart and indistinguishable robed nuns chatter exposition. Welcome To Mercy is plagued by a coldness outside the film’s snowy exteriors, possibly due to Ruhlin’s rather distant performance. Tonal chills linger without grasping religious dread while some of the film’s more enticing arcs – are those romantic undertones between August and Madeline I detect – never come to fruition. Bertelsen sidesteps redundant subgenre bound-to-beds-writhing The Devil Inside or The Last Exorcism rely on, but what’s embraced still feels frozen in time save one bloodsoaked awakening.

Welcome To Mercy is too listless a tale of motherhood and monsters for its good. Score, cinematography, intent – it’s all so muted and subdued to a detrimental degree. Those more tuned to a softer brand of hellish overtaking, maybe this is more for you. Madeline ferries to a commune decorated by crosses and “Hail Marys,” but horrors escape hallowed grounds like warm air through cracked windows. You’ll at best leave more tickled than thrilled, vaguely recalling one woman’s fight against malevolence without much presence worth a more hardened genre veteran’s time. “Welcome to Mercy,” now where’s the exit?