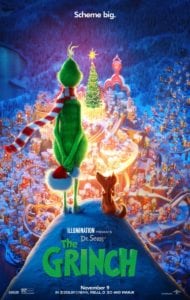 A grumpy Grinch plots to ruin Christmas for the village of Whoville.

“We are going to do mean things and we are going to do them in style”. That about sums up Illumination’s (the Despicable Me franchise and creator of the universally popular minions) rather faithful retelling of Dr. Seuss’ The Grinch Who Stole Christmas, where the eponymous green creature’s (voiced by Benedict Cumberbatch, who works for the angrier dialogue lines but feels miscast elsewhere) mischievous deeds are assisted by gadgets and devices that would not feel out of place in the hands of Gru, the protagonist of those animated features. The music has been remixed and performed by Tyler the Creator, and the less said about the music here the better. Stick with the classics. And while you’re at it, just stick to the original Boris Karloff led cartoon.

There is nothing outlandishly or offensively bad in this reimagining of The Grinch story, but it also covers the same ground, taking the Hollywood obsessed approach of bigger is better (Whovilles’ upcoming Christmas festivities is prepped by Angela Lansbury’s mayor to be three times the typical size, gigantic town hall Christmas tree and all) yet yields severely diminishing returns. Obviously, the CGI animation is wonderful and more detailed (there’s a terrific image of The Grinch atop the peak of Mount Crumpit, looking down on Whoville, complete with visible layers of fur, some of which is covered in equally impressive snow effects). However, technology can advance all it wants, as heart is heart, and is something that comes from great filmmaking talent transcending eras and genres. By the time The Grinch’s heart expands three sizes, you don’t so much as feel a lonely soul throwing in the towel and submitting to holiday cheer, love, and kindness, more like enthusiasm that this lackluster version of the story is just about over.

As per usual, The Grinch comes up with a plan to impersonate Santa Claus and swoop in on Christmas Eve night and steal every present, Christmas tree, ornament, decoration, and whatever else there is associated with the holiday, effectively hoping to rob the happy citizens of their joyous spirit. There are a few subversions on the source material here (namely with The Grinch and his conflicted but loyal dog Max actually finding a reindeer to utilize on the night of their operation). However, the real and only worthwhile differences come from Cindy Lou Who (a charming Cameron Seely) who wishes to meet Santa Claus in the flesh so she can ask him to help out her overworked and overstressed mother (voiced by Rashida Jones). Outside of the inherently likable intentions for desiring that meeting, Cindy Lou Who and her friends also share quite a few amusing scenes as they plot out how they should capture Santa Claus. Perhaps the reason those moments work so well is the movie isn’t employing exciting set-pieces or helpful devices that feel rejected from an original draft of Despicable Me, but rather feels organic and relatable.

Too much of The Grinch feels showy and more about what the animators can accomplish, instead of successfully crafting a story about the true meaning of Christmas and how that alters the life of the grouch at the center. Less is more; there is a lengthy segment early on where The Grinch is nefariously messing around with the residents of Whoville, with the dastardly behavior combined with the simplicity of the acts making for some mild laughs. We are told that this humanoid being was born with an irregularly small heart which is all we need to know for the plot to justify his rudeness and utter contempt for anything Christmas related. Of course, the full-length feature feels the need to expand on this with brief interjections of backstory, and as you can probably assume, just about all of it is unnecessary and pointless. Still, none of that is as bad as some of the occasional atrocious humor, such as The Grinch working out in pink “game-time shorts” as preparation for his silent night heist, among other bizarre sights such as him in white underwear placing his a skin-replica outfit on over himself. Whatever, no questions asked. 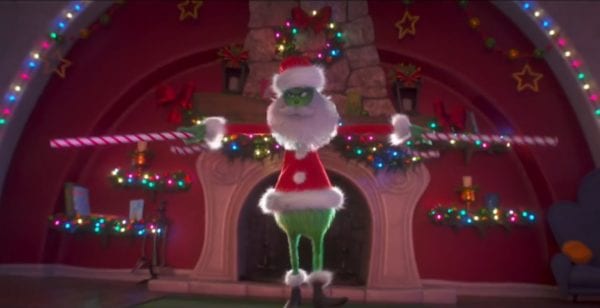 As the debate continues on regarding length in films and their correlation to quality, there’s another debate that should continue to be fiercely waged right alongside it; the more style and special effects you cram into a beloved tale, the more you strip away the soul of its emotionally compelling story. The Grinch Who Stole Christmas is roughly an hour-long and contains none of the razzle-dazzle on display here, yet I would take it over this corporately manufactured remake in a heartbeat any day, no matter the size. Kenan Thompson scores the majority of The Grinch‘s laughs as Bricklebaum, a Whoville resident dripping with an unabashed affection for Christmas, and I wish I could have mustered up that same amount of enthusiastic praise for this. There’s nothing wrong with remaking classics; just remake them with heart.