Next, I got to meet a lovely lady, Diane Pershing, the voice of Poison Ivy. She was an energetic woman who I watched interact with fans greeting her and she gave them a broad smile and her full attention for every one. She recalled her story about gaining the role of Poison Ivy and it perfectly illustrates how Hollywood works.

DP:”I was there to film some incidental roles, background parts and I don’t know exactly but the actor doing that part was not there, so Andrea (Romano) asked me if I’d like to audition for the part. I looked at the script and her picture and I thought ‘I’ve got it; I’ve got her voice in my head.’

During the panel, Diane described Ivy as “Sexy but with a PHD,” and how women over the last few years doing these events have remarked looking at that as a bit of a role model type. She also told an illuminating story of abuse victims coming to her and in tears, talking about the Harley & Ivy episodes where Ivy would advise her friend “not to let a man treat you that way” and how simple lines in a cartoon gave them hope and a light out of their situation and soon Diane found herself crying with them. When I asked her about it, she said it’s been bubbling under the surface for a long time, and we agreed on how this show, so topical, would come up in that conversation some 20 years later.

JR: “One of the great pairings that came out of this show was the friendship between Ivy and Harley; did you get to record together for those episodes?”

DP: “Yes, it was wonderful; Warner Bros. was the only studio doing this where you would have the whole cast there and it would almost be like a theater production. So when Arleen and I would do those episodes, we’d be looking right at each other and it’s so much easier to play off someone you’re looking at.”

It was so loud in the area we were in, I dropped down to my knees and shared a great little talk with Diane, face to face, just like she described only moments before.

JR: “Two of my favorite episodes of all time in this series, you were in two of them. Almost Got ‘I’m, where Ivy walks into the card game and she has history , once dating Harvey (Dent), as Two-Face sits there and you throw a verbal jab his way. The other, is House and Garden….”

Diane smiled broadly and clasped my hand at the mention of this episode.

DP: “I was so grateful for them giving me that episode where I could really do some great work as that was Ivy actually trying to convince herself that this is what she wanted, children, a husband, but she was in denial and you see her come to the realization that she is evil, deep down, but even she wanted to convince herself, and she nearly convinced Batman!” 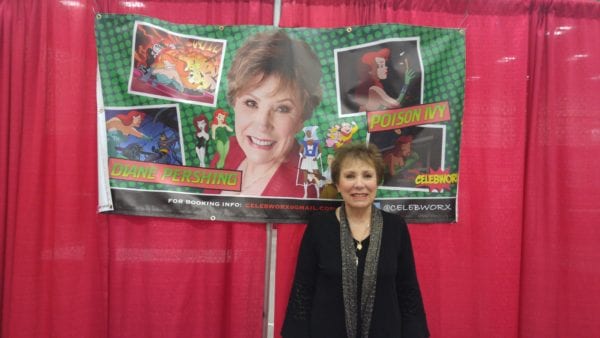 At this point, all I needed was my centerpiece interview; as the night drew longer, I bided my time. Then, just as the sun went down and the moon started rising, Kevin himself, like his famous counterpart, drifted into the shadows and he was gone. I’m not going to lie: I was pretty crushed. But, dreams are that because we’re always trying to achieve them. So, I will wait until the next opportunity. Both Loren and Diane are top notch people and I couldn’t have been more pleased meeting them. As I drove back home that night, after a wonderful and entertaining event, clouds were covering the sky like a thick blanket; and underneath them, I could see cracks of light, a storm brewing underneath and I was reminded of something Loren said to me.

“You should write we need to do some more episodes, bring the show back!”

When he said it, on my way home and even now, my face lights up with the thought. In an era of reboots and starting over, why not the greatest scripted animated show, nay, one of the great shows of all time, why not give this one another run, another chance to not only fulfill it’s lifelong fans hopes and dreams, but find new ones out there? Those words give me another dream to hold onto as I leave the busy streets of Louisville and close this great beginning chapter into meeting the legendary voices of Batman: The Animated Series.