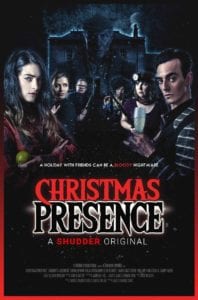 A diverse group of friends gather for the festive season in a remote lodge but soon plans go awry. One of the friends goes missing and the truth behind why the lodge was booked for the holiday is disclosed. Christmas quickly turns to chaos and a bloody nightmare ensues.

James Edward Cook’s Christmas Presence – previously Why Hide? – doesn’t hold promised mystique. It’s well shot, scenically lit to expose snowy isolation, but the titular “presence” never terrorizes holiday spirits as viciously as hoped. In the macabre realm of Christmas horror, production value and keen cinematography are enough to stand out amongst z-graders thrown onto Amazon Prime without care. Compare further, and you realize how little else Cook’s declaration of traumatic tidings has to offer past psychological manipulation with generic damnation.

You’ve heard Cook and co-writer Karen Taylor’s tale of Christmas Presence a hundred times over by now. Friends gather in a remote locale to celebrate winter festivities, but all is not how it appears. McKenzie’s (Charlotte Atkinson) rental selection ultimately ushers her friends into a dangerous game of hide-and-scream sparked by personal motivations. Patry jubilation quickly descends into madness when a shadowy, gaseous figure appears who picks the houseguests off one by one – preying on fear while manipulating reality. McKenzie dreams of dancing with destiny, but it comes at a grave cost. One that’s paid for in blood.

In other words: girl foolishly brings her friends somewhere they shouldn’t be, an evil figure threatens their good time, and bodies start piling up. Uh huh.

Performances elevate otherwise drab plotted outlines, most flamboyantly William Holstead as eccentric underwear designer Hugo. His catty introductions of all the film’s major players spike holiday niceties with bitchy bitterness, albeit in a very joyful and playful demeanor. Elsie Bennett and Orla Cottingham are a bubbly lesbian couple played to be graceful beauty versus brash personality “barbarics” (opposites attract). Then you’ve got Lorna Brown and Mark Chatterton as an age-defying couple on the outs, which comes into further play as secrets begin to leak. Mix in Charlotte Atkinson’s portrayal of the film’s instigating protagonist, and chemistry builds quickly amongst the attendees – only to be torn down by malevolent forces.

Enter what first appears to be Slenderman’s pitch-black cousin, spotted by a cowering Hugo. There’s no true classification of what’s doing all the killing in Christmas Presence, although Anita (Lorna Brown) refers to the beast as “Kwaku Anansi.” Originating in Ghana folktales, this apparition can appear as a human, arachnid, or both at the same time. Now, does that mean Anansi is just what Anita fears most – Predator face an all – or is this the true definition of what hunts McKenzie’s troop? Most spectacularly as a feathered old-timey sideshow performer who approaches Jo (Orla Cottingham), creeping the *hell* out of phonograph lyrics asking “Daddy, would you buy me a bow-wow?”

Unfortunately, a lack of cohesion between the story’s focus on deaths doesn’t do much to thread together anything substantially memorable. Yes, there’s an intriguing “Lesbian Bed Death” sequence. Sure, Jo’s vomiting of buttons calls back to popped clothing detail found earlier. Lesser development for Marcus’ (Mark Chatterton) older lover makes his death a non-event, much like how characters keep isolating themselves as to ensure Anansi’s job is effortlessly easy. There’s nothing remarkable in terms of effects – some nasty self-inflicted gore, other CGI question marks – as names just get checked off a list with procedural mechanics. Lambs to the slaughter, no bigger deal made.

Christmas Presence relies so heavily on its actors, and while lingerie photo shoots and brewing distrust work enjoyable angles, the looming “presence” we should fear never asserts dominance. It’s paint-by-numbers scripting that so safety colors between rigid lines, never living up to more salacious details such as Hugo’s sauciest of performances. Even a landed “Boxing Day” pun during Act III can’t make this seasonal haunter anything more than textbook theatrical torment. Fun enough, sinister in spurts, but just not the soup-to-nuts package worth getting overly excited about on Christmas morning.