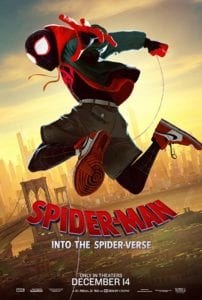 Miles Morales becomes the Spider-Man of his reality and crosses paths with his counterparts from other dimensions to stop a threat to all reality.

Following two reboots, an uncertain agreement between Sony and Marvel and the global domination of the MCU, Spider-Man: Into the Spider-Verse offers an entirely new spin on an established character. An animated, self-referential piece of family fun, it is one of the most original and best Spider-Man films that we’ve seen – and this is from someone who loved Sam Raimi’s incarnation and feels heart warmed every time Tom Holland pops up on screen.

This version follows teenager Miles Morales (Moore) who lives in a universe where Peter Parker exists and who has been through all of the adventures we’ve seen on screen before (a montage of the epic train scene from Spider-Man 2 and the embarrassing dance sequence from Spider-Man 3 are on show). After being bitten by a radioactive spider Miles finds himself at the centre of a plot by Kingpin (Schreiber) to open up parallel dimensions, resulting in a team up movie of every Spider-Man, woman and animal you can think of. There’s an over the hill Peter Parker (Jake Johnson), Gwen Stacey as Spider-Woman (Hailee Steinfeld), Spider-Noir (voiced expertly by Nicolas Cage), Spider-Ham (John Mulaney), and Peni Parker (Kimiko Glenn).

Into the Spider-Verse brings together a cross section of genders, races and species and is hugely successful because of it. Following Stan Lee’s death this year, a number of articles sprung up claiming that Spider-Man was Lee’s favourite as he was designed so that it could be anyone under the mask. This lovingly created script from Phil Lord (of LEGO Movie and 21 Jump Street fame) and Rodney Rothman is a testament to that ideal. You have the Peter Parker we all know and love, but then you also have a black teenager, two independent women, a dark and mysterious Spider-Noir and Spider-Ham the talking pig. There are so many stand out moments from the script, from Miles learning how to swing with the aid of Peter Parker, to hilarity with Spider-Ham, all the way through to a bombastic and heart wrenching finale.

Visually, Spider-Man: Into the Spider-Verse is unlike any comic book film we’ve seen before. From the Ben-day dots that grace each frame to the comic book panel style and the way that Kingpin has been drawn, it is a visual feast. The direction from Persichetti, Ramsey, and Rothman is playful, over the top and adds to the dynamism of the story and the characters. The score by Daniel Pemberton is also evocative. 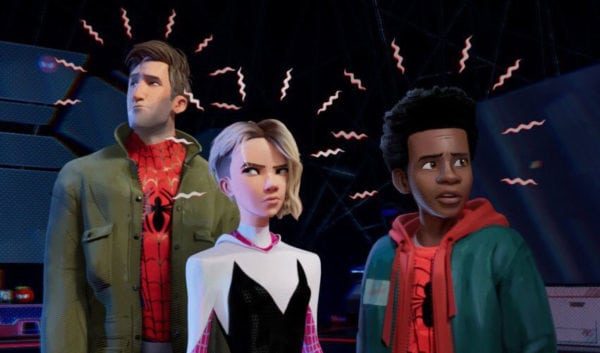 What makes Spider-Man: Into the Spider-Verse work so well is the cast. Led by Moore as the insecure teen Morales, everyone else is pitch perfect, with Jake Johnson, John Dulaney and Nicolas Cage standing out particularly. Each actor breathes life into their character and whilst there are a few clichés in the script, the cast have the talent to deliver and create emotion in the audience.